Carolyn Mackler and I wanted to physically see The Future of Us on bookstore shelves the first day of its release (which, y'know, is today!). Since we're both in Chicago for a conference, our lovely editor (and fellow author), Jocelyn Davies, found a store only a few blocks from our hotel.

Because we also wanted to sign whatever books they had in stock, we first made sure they had copies so we didn't embarrass ourselves. ("We're here to sign copies of The Future of Us. Oh, you don't? Oh...okay...so... Have a nice day!")

But they did have copies. Lots of copies! Actual books. In an actual store! We flipped them open to also see the actual words. And then, much like how we wrote the book, we both wanted to monitor what the other one was doing. 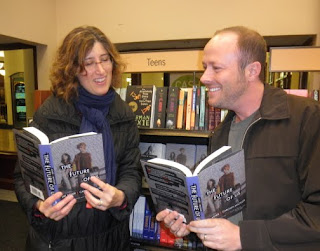 Then we got down to business. Along with signing the new book, we also signed copies of Thirteen Reasons Why and The Earth, My Butt, and Other Big Round Things. 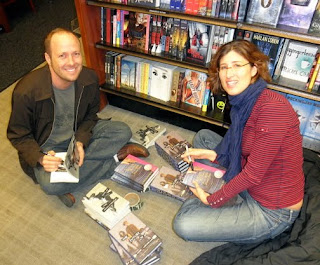 But then I decided, even though I already had several free copies of The Future of Us at home, I wanted the joy of buying a copy. 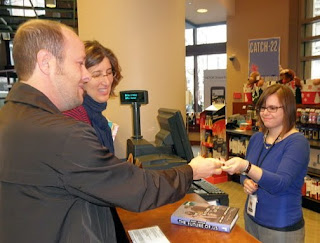 Shortly after purchase, I flipped it open and told the very sweet person on the other side of the counter (Remember us, Christine?), that the dialogue sounded awfully familiar. I felt like I'd read the book before. 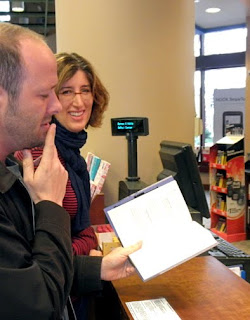 Christine said that was probably unlikely. "The book just came out today." But I was sure I'd read it, so I wanted to return the book. Although a bit confused, Christine returned it and gave me back my cash.

And Carolyn hid her face in her hands. 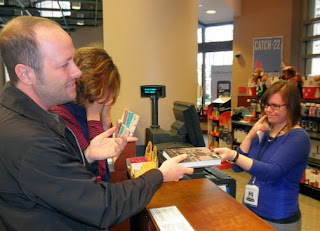 The real reason I did this is because I didn't want anyone else to have the sick satisfaction of being the first person to return a copy of the book. I wanted that person to be me! 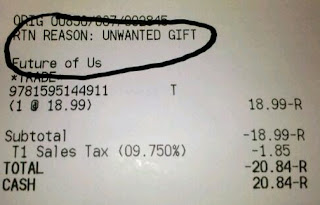 Carolyn and Jocelyn left for previously scheduled meetings, and I stayed to browse. Within five minutes, a woman approached me. She was a teacher visiting from Minnesota, had just purchased a copy of The Future of Us, and was told I might still be in the store.

So thank you, Jennifer, for balancing out the first day sales! 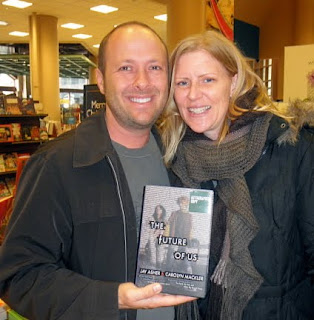 So awesome, Jay!
So funny!
I now no longer just want to be published, I want to rib a bunch of employees at a bookstore on the first day my book comes out. This is what life is really about ;)

hahaha, you guys are awesome.

This is great! What an exciting day! Congrats to you both :) I wish I had been there to get a signed copy! *(just a little) green with envy*

Oh, Jay, that is too funny! You're such a goof. Although one of my best friends is a published local author here in NJ, and he's got the same sense of humor as you. I could totally see him doing what you did!

Congrats again on the release of The Future of Us! I'm going to make sure I tell our local indie bookseller to get some copies in his store.

Congratulations on the book! Hopefully it'll be in the bookshelves in Norway soon as well. And by the way, I just realized that on the russian copy of "13 reasons why", your name is spelled Djej Esjer. That's funny.

It was wonderful to meet you, Jay! What an honor! A true English teacher celebrity sighting! And I just about abandoned my family over Thanksgiving to finish Future -- what a FABULOUS book - fascinating on so many levels. Can't wait for the next one!!

This is definitely becoming a habit for you! I loved The Future of Us, it was funny, smart, and engaging.