Several months ago, I was asked to take part in a literary festival in Estonia. I quickly checked my calendar and said, "Yes!" And then I quickly went online to figure out (literally) where in the world I was going. I mean, I knew a little about Estonia, but in case you didn't know, there are so many countries in this world! And this gave me a great opportunity to dig in and learn some more about this part of the globe before heading over.

The time difference is ten hours ahead of where I live in California, and so much further north. When I got to my hotel, it was already 5:30pm, which meant there were only several more hours of daylight. 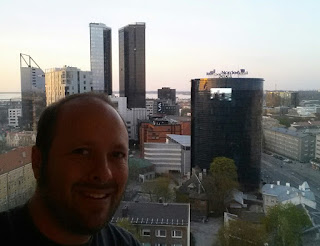 Above, the city of Tallinn looks very modern, which it is. After all, Skype was invented in Estonia! Sadly, for a country with a history much older than the U.S., most of its historical buildings have been destroyed over the centuries by the many countries who have occupied this area. But what has survived is beautiful. 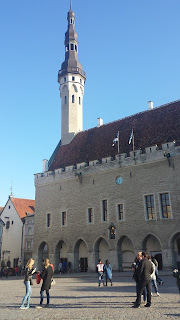 The following pic was taken on my second day, after driving to the city of Tartu for my first event. The people who helped organize much of my trip include Triin Toomesaar (executive director at KiVa), Annika Aas (librarian), and Tiiu Vitsut (from the U.S. Embassy). 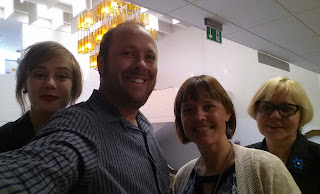 I was one of three speakers at the opening ceremony of the 13th Tartu International Literary Festival Prima Vista. (13th. I know!) But before the speakers began, they had a very weird...but also cool (but very weird)...artsy thing going on with a man in a bathrobe who sang and flipped through an atlas while another man played the piano and a synthesizer. And all of this happened while a green flame burned on top of a cart, of course. It was very Northern European and very cool...but weird.

We exited the room so that it could be made a little less atmospheric, and then I spoke to an audience about Thirteen Reasons Why. While I spoke, a handful of attendees wore headphones so a translator sitting in a nearby booth could translate my words into Estonian. 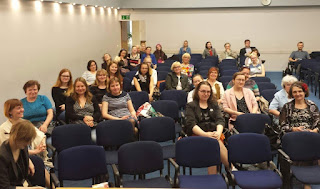 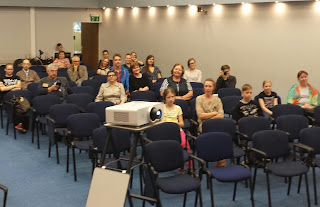 I didn't know it, but the Estonian publisher of that novel was in attendance! So this is the guy originally responsible for me being invited over. 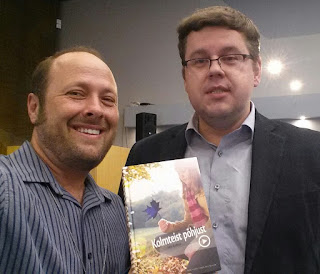 These two women brought up their Estonian copies of my book to sign, which were my first autographs in that edition. 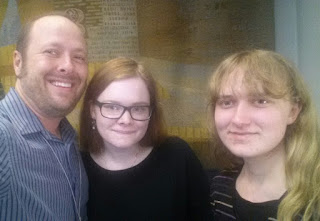 And this reader brought her Russian edition to be signed, which was also a first. And this particular Russian  cover I actually had never seen. 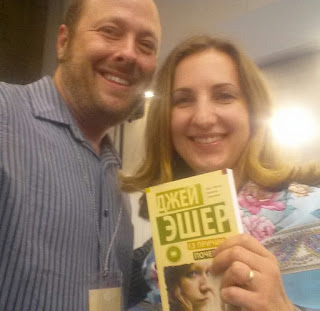 Then I was given a tour of the city. Apparently there are several of these rectangular yellow art structures around town, which you can swivel to frame things like they're on a National Geographic cover, such as this leaning building. 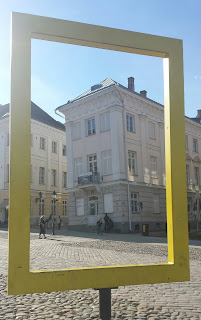 That night was the Mayor's Reception in the Town Hall, where I received a signed thank you letter from the mayor himself. But no one else was taking selfies with the dude, and my shyness got the best of me. But now I'm kicking myself for not getting a pic with him!

The next day, we drove to the University of Tartu Narva college. The first thing that caught my attention were the bathroom signs. They weren't signs at all! They were lights beamed onto the floor from the ceiling. Why? I don't know! And that's awesome!!! 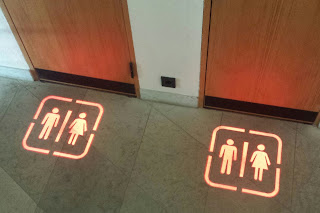 As I told the students in Narva, if I had known while writing this book that it would one day bring me to speak at a college in Estonia, introduced by U.S. Ambassador, James D. Melville, I probably would have puked. But that happened! (The speaking, not the puking.) 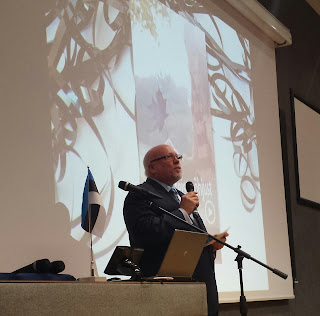 Narva is so close to Russia, about half of the students here listened through headphones as my words were translated into Russian.

This reader had me sign the first version of this Russian edition. 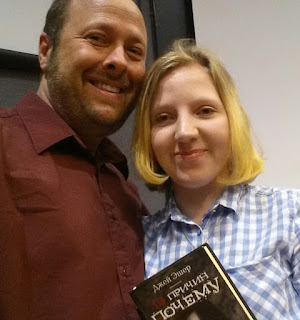 The history of Estonia is fascinating. Seriously, look into it! They've only had a few decades of independence in their long history, most recently gaining it back in 1991. Because of Narva's proximity to Russia, and the majority of its citizens speaking Russian as their first language, most things are printed in both Estonian and Russian, such as these posters for my visit. 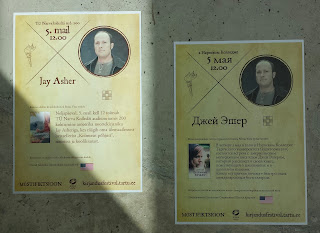 How close is Russia? In the following pic, I'm standing in Estonia, and the castle across the river is Russian. That's pretty close! 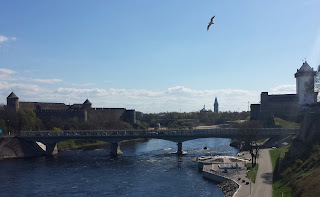 For my last event, I went back to Tallinn. At the Apollo bookstore, I spoke on a panel about bullying. As I've found while travelling throughout the United States, and my previous foreign visits to Germany and Canada (yes, Canada counts as a foreign visit!), this is an issue that's been around forever, but people around the world are just recently deciding it's not something we should tolerate anymore as "a part of growing up." And I believe this is an internationally beautiful and unifying thing! 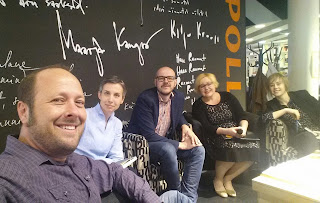 I also got to meet, for the first time, a translator of one of my books! Liisa Raudsepp did such an amazing job on the translation, she was even nominated for a major award. 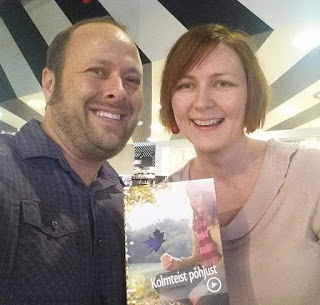 Thank you to everyone I met in this beautiful country. You, and your history, have truly inspired me.