When I first became an author and spoke in a place I'd never been, I always stayed an extra day to check out the town. The school or library hosting me would pay for the hotel nights needed for my visit, and I paid for the extra night. It didn't matter how small the town, I always found something beautiful and unique on my Days of Exploration﻿.
Eventually, especially with a young son at home, I stopped staying those extra days. While I've absolutely loved every town I've visited, I leave some places kicking myself that I didn't stay that extra day.
Lake Placid, in New York, is one of those towns. The downtown was so quaint, and the surrounding area was so beautiful!
I flew into Albany and then had a 2.5 hour drive to Lake Placid. When I need to rent a car, I usually pick something small and fuel efficient. But I checked the weather the night before I left sunny California, and I thankfully was able to upgrade to something a bit heavier because it snowed the entire drive.

Entering Lake Placid at night was kind of eerie. I knew the Winter Olympics were held there in 1980, but I didn't know most of the structures built for that event were still up. So when two ginormous silhouetted "things" appeared above the trees, it freaked me out! It didn't look like a factory. It looked like where you'd launch something into space. But as a NASA buff, I knew there wasn't a launch site in Lake Placid.

I spoke to the students of Lake Placid High in the morning, and they were a lot of fun!

I spent the rest of the day in the school library, where students and classes came throughout the day for informal chatting. We discussed books, writing, my teen years, and I may have leaked some Thirteen Reasons Why info that I wasn't supposed to leak yet. Thankfully, those students promised not to tweet anything. And they haven't!

When I was in high school, I took two semesters of Creative Writing. I wasn't any good at it, and I'm thankful I didn't know that at the time. Sadly, most schools have cut their elective writing classes. So I'm always thrilled to find schools like L.P.H.S. that found ways to keep those classes. In fact, one of the classes that joined me in the library studies nothing but Crime Noir literature. How specific and awesome is that!?!?

In the evening, I spoke on a panel about suicide prevention. The CYC helped bring me to Lake Placid, and any community that has a group like that is extremely fortunate. 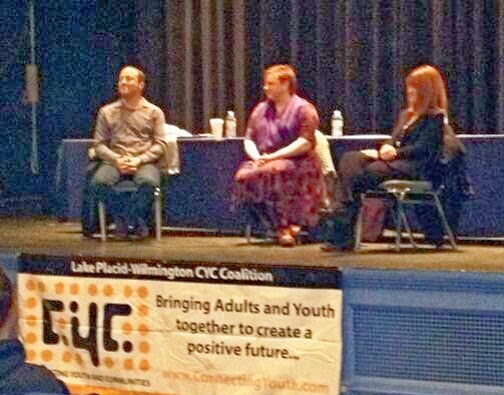 The Bookstore Plus sold my books during my events. In the little downtime I had, I made my way over there and I picked up three books: a novel set in Lake Placid, Sugar and Ice, by nearby author Kate Messner; a book about the Miracle on Ice, The Boys of Winter, which took place in the hockey arena built right next to the high school (and I mean, right next to it!); and Champ, about America's own Loch Ness-type monster. So that's one fiction book, one non-fiction, and one non-fiction about something fictitious...or is it? 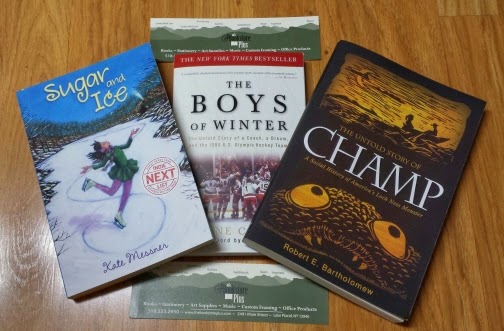 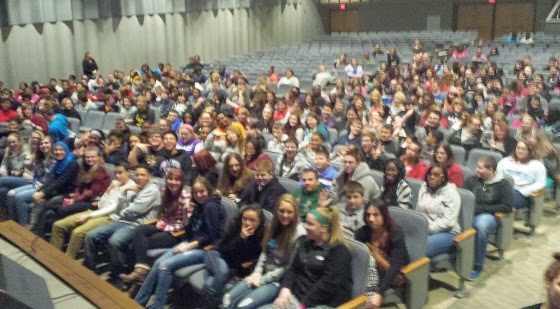 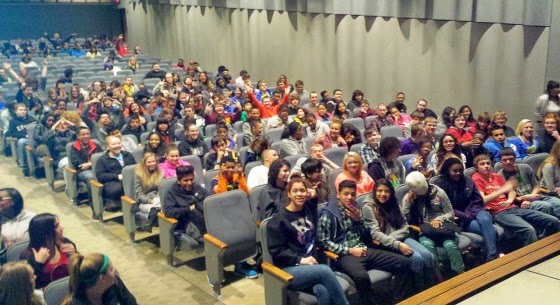 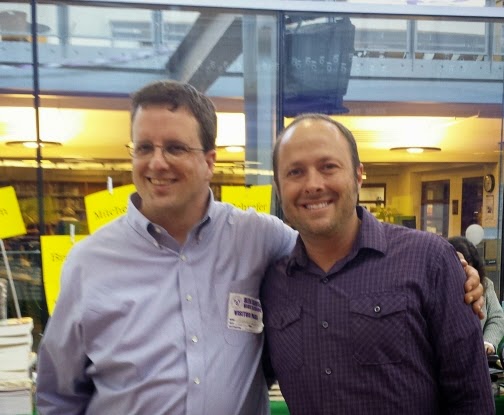 Next up? I'm visiting Lake Placid, NY. And I will be better by then. I'm not letting that airplane-talker keep me down!
Posted by Jay Asher at 7:27 PM 2 comments:

To kick-off the nomination process for stops on my upcoming book tour, I flew to New York City last week. I gave a presentation at one school while schools across the country watched online. Of course, flying from California to New York with snowstorms approaching, everyone (including me) was nervous about whether I'd make it on time. I couldn't miss it!
Thankfully, I made it.
Before speaking at the school, I went to my publisher's office to have brunch with some of the many people who continue to have so much excitement for Thirteen Reasons Why (which is almost 6.5 years old now!).
﻿ 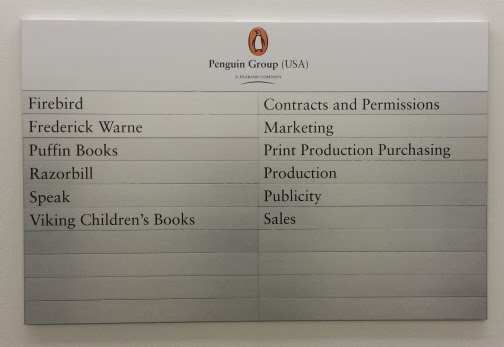 Then I filmed a few videos that will be posted online in the near future. Like I always do after recorded interviews, I'm now thinking, "Why did I admit to that?" for a few of the answers. 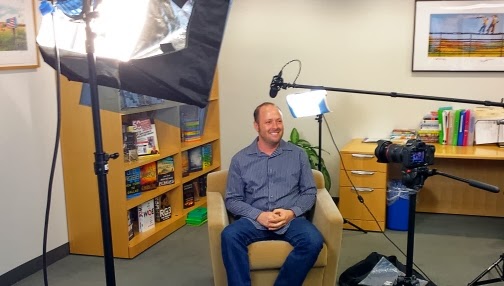 We walked down to the Little Red Schoolhouse and Elizabeth Irwin High School (which is a mouthful, so thankfully they refer to it as LREI) for the webcast. 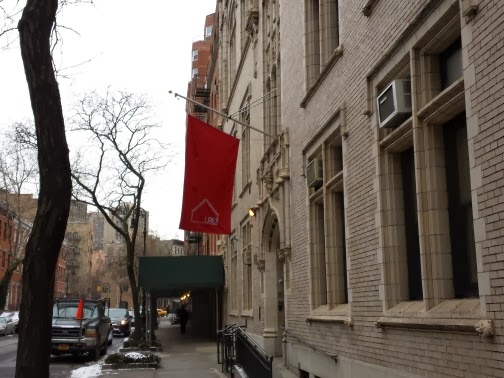 The students I spoke with in person were great. And I'm glad they were there! We had a back-up plan to do the webcast from the Penguin offices, with people from Penguin acting as my audience, if there was a snow day in NYC, but it all worked out. The front row in this pic is mostly made up of people from Penguin and School Library Journal (co-sponsors of this event). 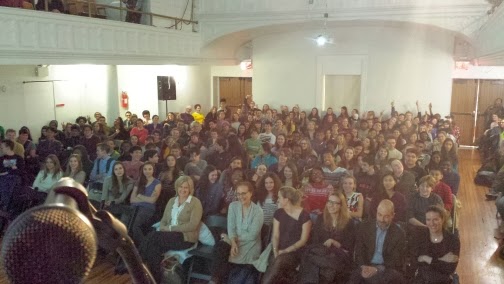 The webcast will be posted on the SLJ site soon, and I'll link to that here when it's up.

It's weird being in such a large city where I have several really good friends, but having so little time to see any of them. I did get a chance to make a loop through Central Park with Carolyn Mackler, though. Here I am munching on goodies from Magnolia Bakery, a shop that gets a shout-out in our book, The Future of Us. In the background is Belvedere Castle, a location in one of Carolyn's previous books. 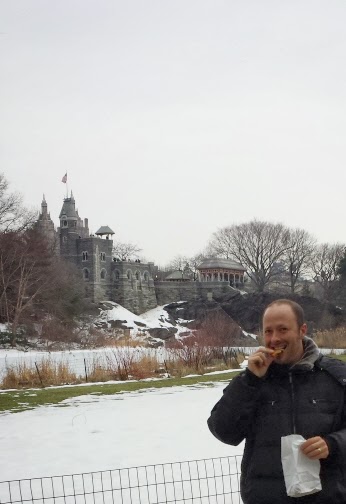 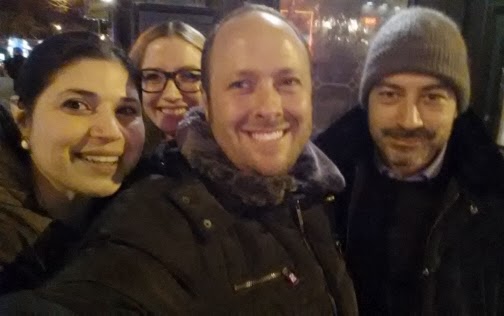 Back in California (you'll notice the clothes in the following photos don't look as warm), I was invited to participate in a stop on Lauren Oliver's book tour. Lauren was an editor at Razorbill when they bought Thirteen Reasons Why. When she became an author herself, I gave a quote for her first book, Before I Fall. And now she's promoting her eighth book, Panic.

Before the event, I got to meet up with my good friend, now a Razorbill author herself(!), Romina Russell. Her book, Zodiac, comes out this December. 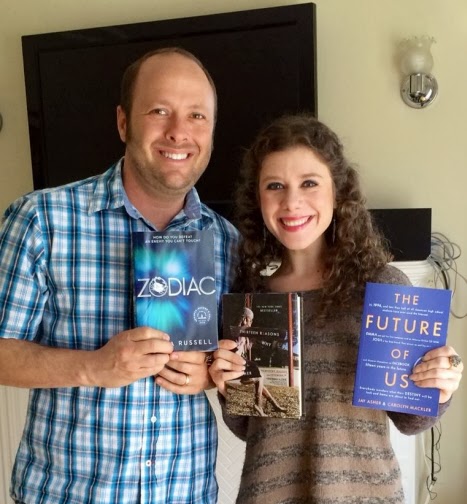 I got to the bookstore early, but not as earlier as I was hoping because of the L.A. Marathon and a cab that never showed up. I always like to take a sneak peek at how many people are sitting in the audience about 30 minutes before we begin. 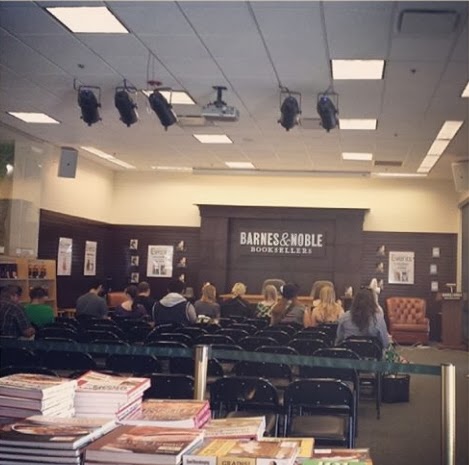 But this time, I wasn't sneaky enough. You got me, Romance Bookie! The chairs filled up nicely. 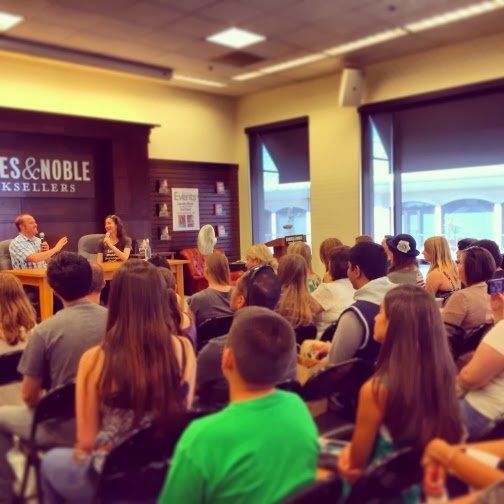 As someone who doesn't take selfies often, I'm somehow ending up with two selfies in this one blog post. And while Ellen's selfie at the Academy Awards (which I watched while in NYC!) broke Twitter with its massive retweets, I'm certain the crowd in ours reads much better books.