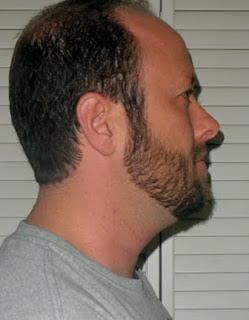 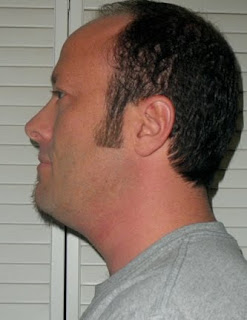 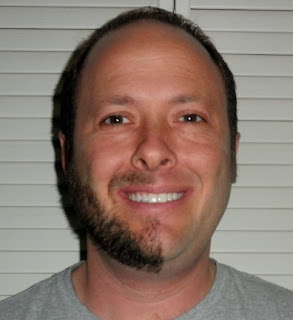 Without a lot of time during baby naps, I do what I can to entertain myself.
Posted by Jay Asher at 8:00 PM 5 comments:

JoanMarie and I have no idea where we first heard of the band Great Big Sea, but if you've hung out with us for any length of time, you've probably heard their live CD playing in our home or car. From Newfoundland, GBS plays a mix of original and traditional folk songs with great musicianship and amazing harmonies. And on Friday night, we finally got to see them live for ourselves! 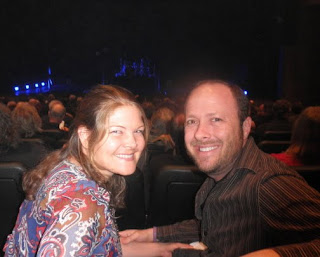 Sorry to shock ya, but when I'm between speaking gigs, the razors get some time off. 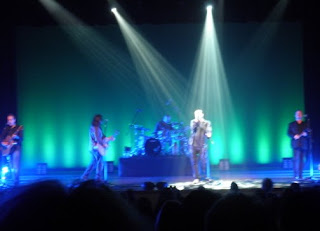 Unfortunately, the smoke alarms went off right before the encore, so our night was cut short by a song or two, but here's a sample of how much fun they are.

But I know why everyone really comes to my blog, so here's a photo of Isaiah laughing at one of his favorite jokes. It's a very simple joke to remember, because the set-up and the punchline are the same. All you have to do is repeat "B-b-b-b-b-b-b" and he'll crack up every time! 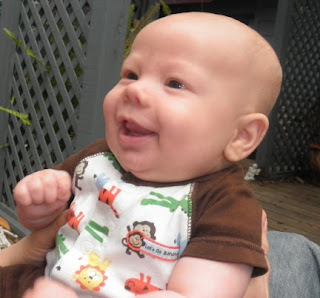 Superauthor James Patterson recently announced the winners of his Dollars for Scholars contest. College-bound students wrote essays describing how their favorite books influenced their decisions about what to do with their lives. I'm mentioning this here because Michelle S. placed in the top sixteen, winning $2500 to spend on books, and guess which book inspired her!

School was always enjoyable for me until I hit the stressors of high school. My sophomore year I was diagnosed with a heart condition that took me in and out of school until the middle of my junior year. However, my heart condition actually turned out to be mild anxiety. I would lose feeling in my fingers and toes and my whole body would get cold due to this condition. It even got as far as dizziness and fainting. It was the worst year of my life I couldn't seem to overcome my anxiety. But, thanks to the help of my counselors, family and friends, I was able to speak to a therapist and get the help I should have gotten during my sophomore year. Thus, I have overcome so many boundaries in high school: weeks without sitting in a classroom, not wanting to get out of my bed, things other kids would take for granted. Now, I've learned to live with my anxiety. I've discovered my limits, and I'm continuing to lead a semi-stress less life. Due to my struggles and the book Th1rteen R3asons Why by Jay Asher, I have decided to combine my talents in art with my desire to help others. I have chosen art therapy as my path for my next four years. Jay Asher's book drew me in so quickly that I was immediately hooked. It acknowledges the hardships teenagers have to face in their four years of high school, as well as the emotional wear and tear students face in their lives outside of school. In the book, the main character, Hannah, is pushed so far that she sees her only option as suicide. If only she had had the chance to talk to someone...

Asher's book has inspired me to help the thousands of people who feel the need to hurt themselves. Hannah went through so much pain that I wanted to help her. Although fictional, there are people out there who are just waiting for someone to listen. I want to be that person. If I could just save one life, I would like the opportunity to do so. Throughout the novel, Hannah describes the 13 reasons why she killed herself as well as confronts the 13 people who pushed her into doing so. I wanted to be the one reason why she didn't. Turning the pages became harder and harder for me. My heart ached for her, and it still aches for the thousands of people just like her. Therefore, through my future work in art therapy, I hope to help those who have been victimized and help them to help themselves as I once did.

Congratulations, Michelle! And thank you for running such an inspiring contest, Mr. Patterson. 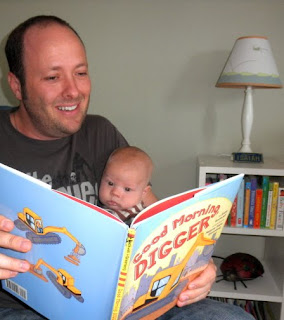 His newest favorite book is Good Morning, Digger, written by Anne Rockwell and illustrated by my friend Melanie Hope Greenberg. Melanie sent this autographed book to Isaiah as a gift, which makes our storytime even more special.

The Spring 2011 Children’s Books issue of Publishers Weekly has arrived! Relying on the brief descriptions allowed for each title, here are the upcoming (or recently released) mid-grade and teen novels which had me saying, “Hmm... Interesting! I may have to check that out.”

Bumped by Megan McCafferty. A virus renders everyone over age 18 infertile in this dystopian novel.

Choker by Elizabeth Woods. Cara worries that her best friend may be responsible for the death of a mean, popular girl.

The Day Before by Lisa Schroeder. After it’s revealed that she was switched at birth, Amber is ordered to split the year between her two families.

Fairy Bad Day by Amanda Ashby. Emma is charged with ridding the world of annoying fairies.

Father of Lies by Ann Turner is a fictional retelling of the Salem witch trials from the perspectives of a girl and the devil.

Geek Fantasy Novel by E. Archer. After making a wish, Ralph is trapped in a fantasy world full of killer bunnies, evil aunts, and bothersome bacteria.

Here Lies Bridget by Paige Harbison. After crashing her car and landing in limbo, a mean girl must face people she’s wronged.

My Life Undecided by Jessica Brody. A girl notorious for making bad decisions puts her fate in the hands of blog readers.

OyMG by Amy Fellner Dominy. At a Christian summer camp, Ellie worries that being Jewish will ruin her chances of winning a scholarship to speech school.

Putting Makeup on Dead People by Jen Violi. A girl finds inspiration while working at a funeral home.

Sean Griswold’s Head by Lindsey Leavitt. Required by a guidance counselor to choose a “focus object” to study, a teen chooses the head of the boy who sits in front of her in class.

So Shelly by Ty Roth is a modern-day retelling of the friendships among poets Keats, Byron, and the Shelleys.

Storm Runners by Roland Smith. A boy who pursues severe storms with his father is tested in new ways when the hurricane of the century hits.

Subject Seven by James A. Moore. An alter-ego living inside a teen escapes and is determined to destroy his creator.

Taking Off by Jenny Moss. In this novel, a teen is determined to witness the Challenger launch after meeting Christa McAuliffe.

Trapped by Michael Northrop. Teens struggle to survive when a blizzard strands them at their high school.

Trauma Queen by Barbara Dee. Marigold is mortified when her performance artist mother becomes a drama teacher at her school.

You Don’t Know About Me by Brian Meehl is a reimagining of The Adventures of Huckleberry Finn.
Posted by Jay Asher at 10:15 PM 9 comments: