I'm always happy to speak locally, and I got a chance to do that earlier this week at Atascadero High School. While I've travelled all over the country to speak, and even outside the U.S. a couple times, this was absolutely one of my favorite visits. 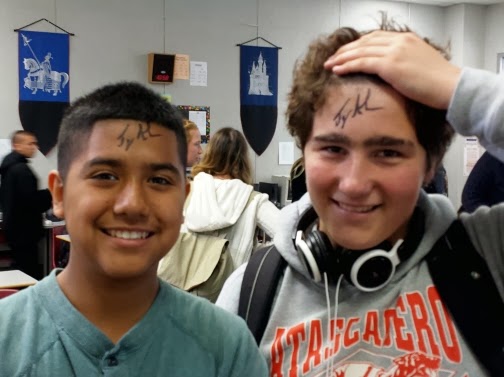 No, it wasn't because I got to sign two foreheads. Although, that was cool (usually, I only get asked to sign one forehead per school...if that!). The reason I loved this visit was mostly because the students in Ms. Hogan's Honors English classes had all read Thirteen Reasons Why.

I spoke to three of her classes, with each period lasting about 90 minutes. I wasn't required to stay the entire time, but because the classes had all discussed my book before the visit, they all had more than enough questions to keep me there.

And that's what made it fun! Their questions were extremely insightful, wanting to know my feelings about certain things that happened in the book and my thought process behind certain scenes.

When I speak to professional writers I rarely get this level of questioning, which gave me an opportunity to explore some new aspects of putting together a story.

Then I spoke in the school library...after eating a yummy salad provided by the district librarian, Ms. Bell, who also organized this visit. Before I spoke, though, we saw a great anti-bullying student video and heard from a Peer Helper at the school. (By the way, this school has a Wellness Center. Does the high school in your community have a place like this? Because it should!)

Thanks for being a great audience, Atascadero. Thank you for your great questions. And the stories some of you shared privately will stick with me forever. 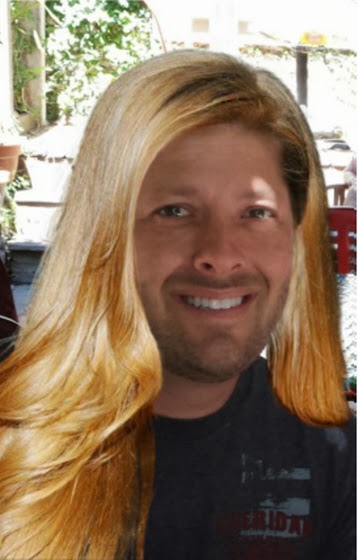 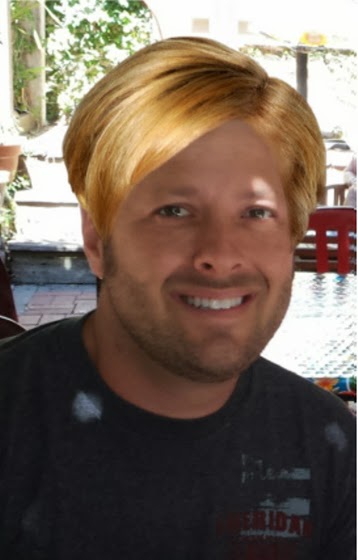 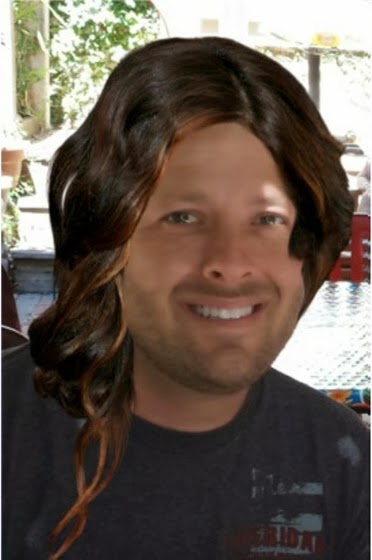 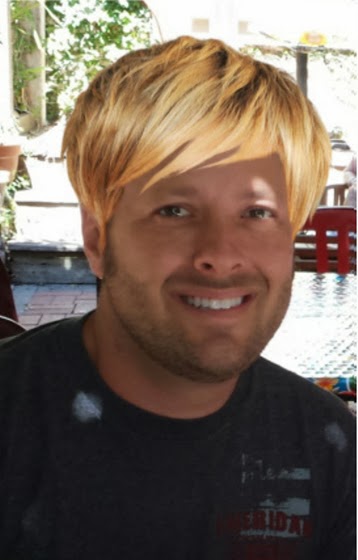 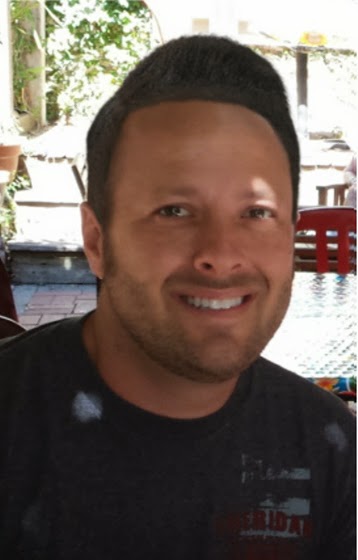 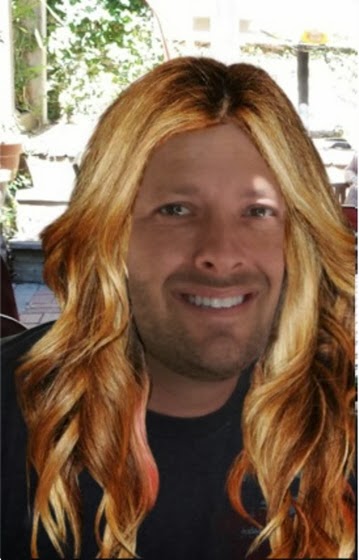 Back to Chicago!
As an author, I fly to Chicago more than anywhere else in the country. From there, it's just a short drive to speak in whichever school or conference I'm in town for. This time, I headed to the largest high school (by square footage) in the country, Stevenson High School in Lincolnshire.
Every two years, Stevenson hosts the Odyssey program. It's two days of nothing but fine arts, where students attend five workshops a day. And there is so much to choose from! I overheard students discuss classes on glassblowing, belly dancing, and stage fighting.
When I was in high school, I made a clay pot.
I gave two presentations each day during school, with sixty students per session. Every student who heard me speak got a free signed copy of Thirteen Reasons Why.

The library at Stevenson is beautiful. As the speaker, their stadium-type seating was great because I could easily see everyone. 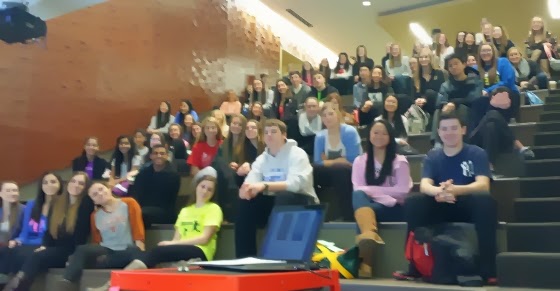 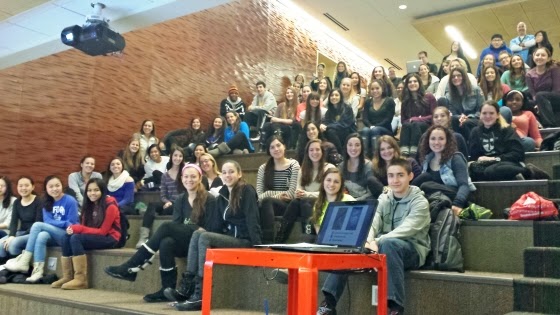 When the first school day was over, my friend (and YA author) Christa Desir took me to Walker Bros., where she promised I could eat a pancake bigger than my head. But she wasn't entirely correct. Yes, it was physically bigger than my head, but there was no way I could eat it all! (Especially when it came stuffed with apples.) 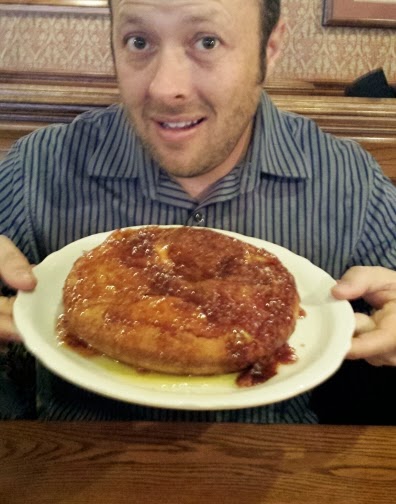 That evening, I spoke to some students and adults in one of the school's theaters. (Yes, I said one of their theaters.)

The next day, I spoke to two more groups during school. 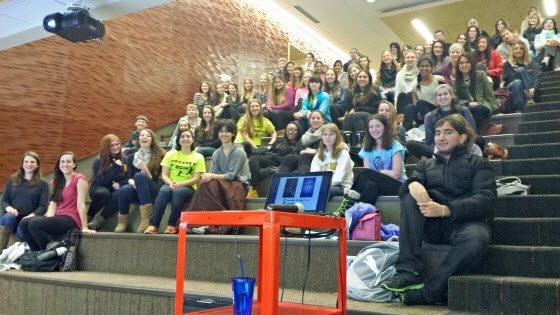 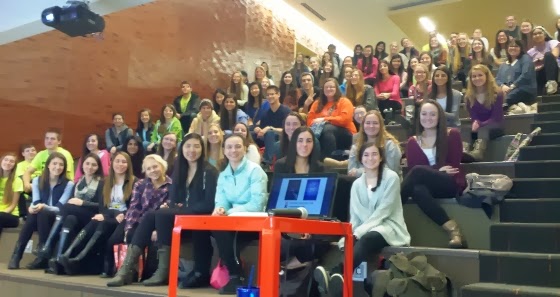 If you've read (or seen) Diary of a Wimpy Kid, you know there's a legendary piece of cheese on the basketball court that's bad luck to touch. At Stevenson, there's a similar tradition. In the center of a very busy hallway is a floor design no one walks across. No one! It doesn't matter how packed the floor is, everyone goes out of their way to walk around it. Everyone!

Actually, when classes were in session, I saw one guy walk across it, thinking no one was watching. And he got this real cocky look on his face when he thought he got away with it. But halfway down the hall, the dude's hair caught on fire.

It was pretty funny.

Even funnier, the Patriot holding the rifle in the artwork has six fingers. Six! Go on, count them. 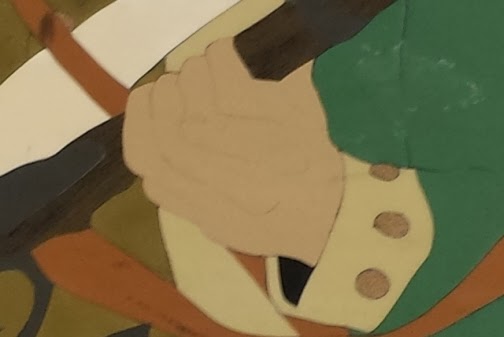 Apparently this was an accident, but I think it's symbolic of the artist's political leanings. If the mascot ever let go of his gun to flip someone the bird by raising his middle finger, he'd have to raise his middle fingerS, thereby throwing a peace sign instead.