For several days recently, I attended my third RWA conference. That anagram stands for Romance Writers of America. And yes, I was one of only a handful of dudes there. Thankfully, as one of my friends unironically said, "You seem to fit right in."

Truly, this is such a warm, welcoming, and supportive group of professionals. Unless you try really hard, it's nearly impossible to feel like an outsider. More than anything, the group is so inspiring. It's impossible to find authors who collectively work harder (as well as put up with the most crap) than romance authors. Check out the trailer for this new documentary, which they screened the first night of the conference:

As a bonus, this year's conference was held at a beautiful San Diego hotel. 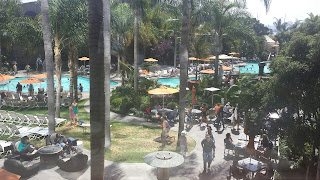 While conferences are great to get re-inspired, reunited with friends, and learn, it's also a great place to promote a new or upcoming release. For me, that meant bringing What Light hot cocoa packets to the Goody Room. I could have given away over 300 of these things if I'd brought them, but we were allowed very specific dimensions, so I had to return over and over to replenish my box. 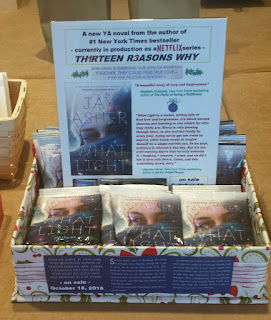 One of the first people I ran into at the conference was Crystal Perkins, who wore a dress that basically begged me to ask for a selfie. 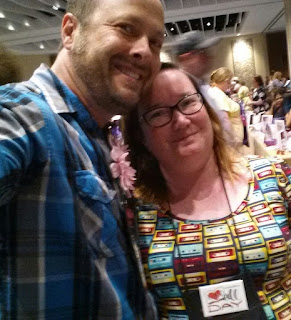 I had dinner with an author I haven't had a chance to hang out with before, Jenny Han. Chatting one-on-one with someone I've never really spoken with can be difficult for a shy, introverted, small-talk-fumbling guy like me. But I completely enjoyed--and learned from--our freewheeling discussion of writing, promotion, race, gender issues, politics and religion. Yes, we absolutely went there in our very first conversation. And we left as friends!

Plus, the food was delicious. Delicious! This wooden bowl is holding BBQ carrots. I know, they look all...whaaaaaa???...but they tasted like...mmmmmm!!!

Other wonderful authors whose books I've read that I dined with but was too dumb to document with a pic: Jennifer Snow, Heather Davis, and Sally Kilpatrick.


I also got to meet a YA author whose debut novel I've been wanting to read since I first heard its premise. And now I have a signed copy of Summer of Supernovas by Darcy Woods! 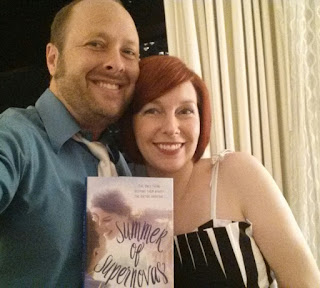 An exciting aspect of this conference was running into authors who had read my books and had teenagers back home who had also read my books. So they sent pics to their daughters to make them jealous! 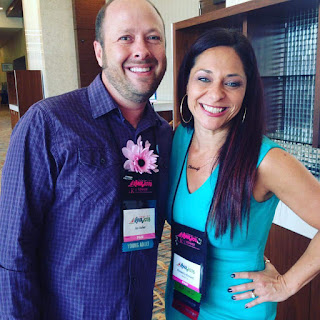 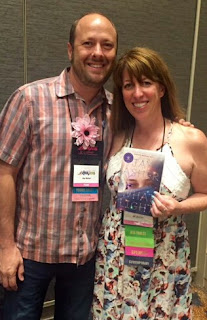 I can't wait to hear what their daughters (and these authors!) think of my new book, which I made sure they received.

Another thing I love about this conference is the thought put into presentation. The main ballroom always looks so glamorous, which adds to the feeling of respect for the art and business being discussed. 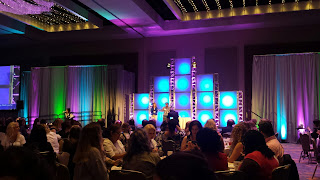 The highlight of the conference is always the awards ceremony. Awards are given to many subgenres within the romance category, with the RITA going to published books and the Golden Heart going to unpublished manuscripts. Both awards are given equal prestige, and the editors of the winning books are also invited to speak after the authors accepts their award.

One winner of a RITA is also a friend. Pintip Dunn's YA novel, Forget Tomorrow, won in the Best First Book category. 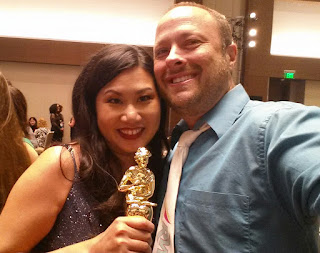 I would love to win a RITA one day. Love! Just sayin'. Just throwing it out there...

There were a lot of sequins and high heels at the ceremony, and even a dude in a kilt, but I was mighty proud of the tie I had made just for this event. I even had it signed by the RITA winner above! 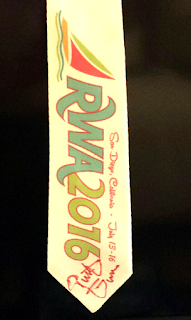 Here's the larger group of YA authors I had the opportunity to hang out with at the conference. 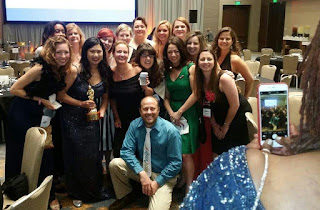 Hopefully I'll see you all next year in Orlando!
Posted by Jay Asher at 5:12 PM No comments:

Yes, I was in Puerto Rico recently. But it was for work, okay? I can't help it if I get to my hotel room and the window looks out on a view like this... 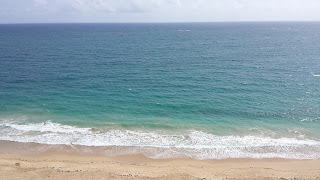 And I can't help it if that window slides open and I can lean out to get a view like this... 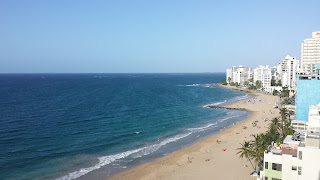 Sadly, I am not a beach dude. Beaches are so...sandy. And if you get in the water, when you get out, that sand sticks to you. And the sun is so...hot.

My wife and my son, they love the beach. So when I sent them the pics from above, they both said they would be very upset if I came home without getting in that beautiful water. But as I told them, which is the same as I told you, this was a work visit. I wasn't there to play!

Plus, I didn't bring my swim shorts.

First order of business, I was interviewed by a local newspaper. And they brought a photographer with them. But I can not help it that this was the backdrop... 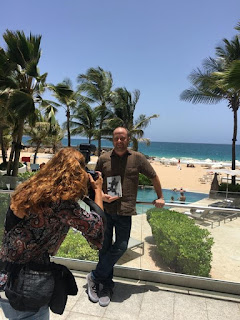 Primarily, I was in Puerto Rico to give a talk and do a signing at The Bookmark Boutique. The most nerve-wracking part of any bookstore visit is the lead-up. Will anyone show? If only a few people show--as can happen--I still enjoy myself, but more than a few is always nice. When I approached the store, that place was packed! People were standing outside!!! 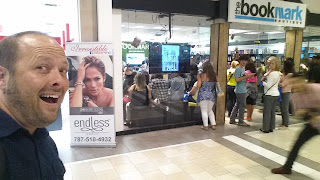 Yes, it was a small store (hence, the Boutique part of the name), but still!

I began by reading a couple of pages as Clay's character from Thirteen Reasons Why, and was soon joined by a girl from the audience who read the part of Hannah. 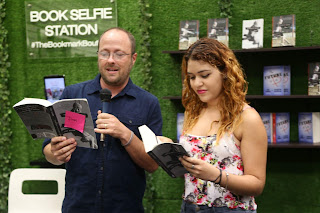 Then I spoke a bit about the writing for that book, and The Future of Us, and told them about the October release of What Light. During the Q&A part of my visit, I gave out packets of What Light hot cocoa mix. 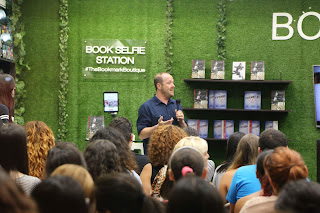 They were an amazing audience! I had a great time, and would love to come back. 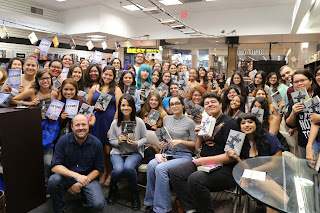 Before I hopped on the plane to fly home, I gave in and bought a pair of swim shorts. I think I was the palest thing on the beach without feathers, but the water was so warm, my only regret is that I didn't dive in earlier. 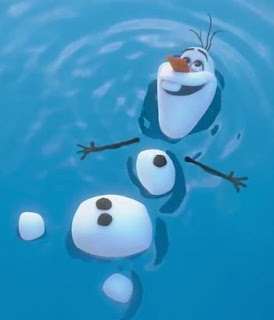