When Carolyn Mackler and I had one week left to edit The Future of Us, we began to get a bit loopy. Too many late nights, too many donuts (for me), and too much staring at the computer screen was a little...too much!

One evening, during a late night barrage of back-n-forth emails with my cross-country co-writer, one of us had a fascinating realization. Our book is set in 1996. Our characters initially have no idea what Facebook is, though it magically appears on one of their computers. So, when they search for their friends and family members in the future, the profile pictures they see then would be the same pictures we'd see if we searched those names today.

Thus began an absolutely hilarious (especially when you're tired) email exchange, linking to the various Facebook profiles our characters would find. And sometimes, the pictures they'd find, which just might be their friends/family, would have freaked them out!

But you know what's making me loopy right now? Knowing that my next book comes out in just a few days!!!

Speaking of... If you haven't seen the EW.com exclusive yet, here's the official book trailer for The Future of Us.

Did you notice that little stuffed animal next to Emma's computer? That's Snort, a Beanie Baby that Emma could've actually owned. And how do I know its name? Because my parents still own it! 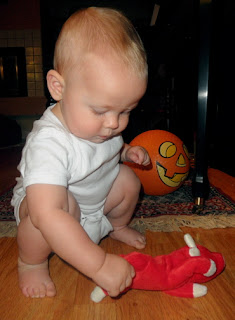 I am super excited about The Future of Us! And I love Snort; he's too cute. I still love and have Beanie Babies; the pink pigs are my thing. <3