I've been fascinated by the Salem Witch Trials since childhood, so I was really looking forward to today's trek. I hopped on a train bright-and-early and headed thirty minutes north to...

Anyone? Anyone? Yes, you at the computer.

It absolutely is Salem. Good for you. 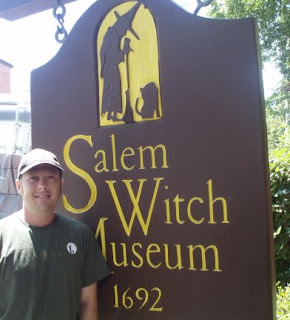 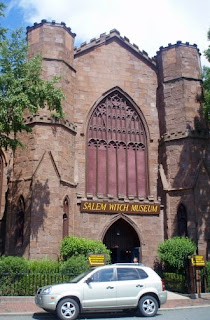 Salem is a town which takes full advantage of its reputation. There are more tourist traps per square mile than any town I've been in. But none of the traps are expensive, so if you don't mind spending eight bucks on a cheesy good time, you'll be alright. (Just to be fair, the cheese you see below was not taken at the Salem Witch Museum.)

There are some gems amongst the cheese, as well. But before I mention those, you need to check out this shot I took in one of the downtown bookstores. The other aisles looked exactly the same. 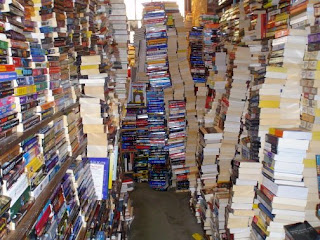 There's a fairly new wax museum dedicated to horror movie monsters called Count Orlok's Nightmare Gallery which is very well put together. I talked to the owner for a bit, and the Gallery is basically a childhood dream come true...which is probably why he took so much care constructing it. The Witch Dungeon Museum is also a lot of fun. It begins with a staged trial re-enactment. 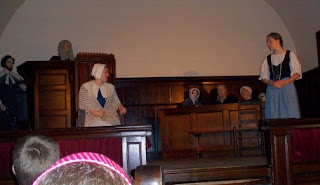 Have I ever told you how much I loved Bewitched growing up? It's true. And even though she was much older than me, I totally had the hots for Samantha Stevens. 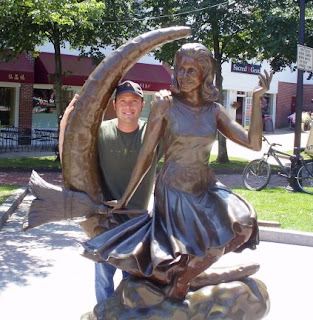 One of the reasons I came to the Boston area was to take a bunch of guided walking tours. Historical tours. Ghost tours. Whatever! I never mentioned the tours I took earlier because I wasn't very impressed. But today I went on the Salem Witchcraft Walk and loved it. Our guide, Tara, knew her history and was an amazing storyteller. I actually learned a thing or two (about the witch trials and storytelling).

The final stop on the tour was the Witch Trials Memorial. The place is beautiful on its own, but when you know the symbolism it's even more impressive. That's Tara walking near the stone wall, which contains protruding stone seats. 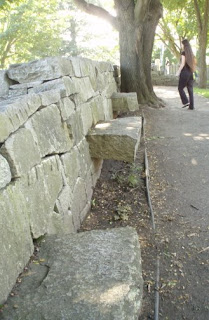 Each seat is a memorial to someone who was accused and executed. 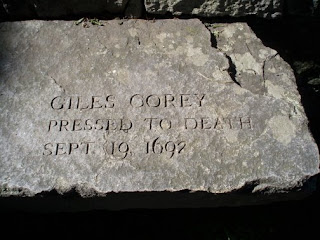 After my tour, I had dinner with Laurie Faria Stolarz, author of many teen books, including the series that begins with Blue is for Nightmares. Laurie actually grew up in Salem, which officially means she rocks. We had such a wonderful conversation about books and writing (which helped me tremendously), that I got all caught-up in chatting and made a couple of severe boo-boos. One, I forgot to get a picture taken with her. And two, I forgot to ask her to sign my copy of Blue is for Nightmares.

After we parted and I realized what I'd done, I punished myself.

No, don't ask me to go easy on myself. It's the only way I'll learn. 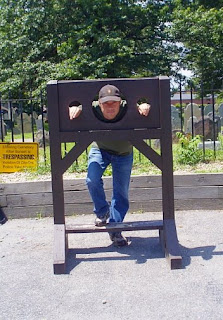 Wicked cool time you must be having :).

I always wondered why people thought they could kill witches through conventional methods. Seems like the witch would be able to stave off the fire or magically cut the hanging rope? Or were they doing it as a test, with a lot of, "Oops, she really did burn...guess she's not a witch after all..."

And I, personally, spent a HUGE portion of my childhood wishing I could BE Samantha Stevens, pretending to do magic...although, I never did master that nose twitch of hers :(. I even almost named my daughter Tabitha, but it doesn't quite go with "Heckenbach"--talk about a tongue twister :P.

Thanks for posting all the fun pics and commentary--you're making me want to plan a family vacation up there!

Kat, even though I'm a guy, I still spent many hours working on that nose-twitch. It was so cute when Samantha did it! But I just looked like I had an itch.

And rh3a, that's the man! Although, there are differing versions of what he actually said...which I found fascinating.

I love hearing/learning about the Salem Witch Trials. It's almost like I have an obession with traumatic events (like the Witch Trials) that have happened in our counrties past. My idea of a good time is researching events as such and learning more about it, pathetic? Yes. But fun? Very.

Don't get me wrong, I am not some odd, totally weird child that worships the unknown. I am an average girl with a wild imagination that just so happens likes to know more about America's disturbing past.

Oh yes, and I forgot to say that if I were to enter that bookstore shown in you blog, I think I would have just entered heaven. I mean, how much better can life get if a person like myself were to be surrounded by stacks and stacks of books?

A perfect place for a writer, don't you agree?