What Did I Miss?

After spending three days doing pre-planned activities in Boston, Salem, and Plymouth, I gave myself one day to just walk around without an agenda.

Of course, my feet happened to pull me into several bookstores. Once inside, they always yanked me to the teen sections where my eyes made me look for a certain book. And wouldn't you know it, I also had a Sharpie in my pocket to sign them!

I listened to a cool cover-band play in front of Faneuil Hall. I watched some breakdancers. And have you seen those people who give away free hugs? Every-so-often they show up at Farmer's Market back home, and I've seen them a few other places. I always thought it was a cool idea, and the huggers were usually so happy and sincere about the offer. So today I thought, "Why not!" 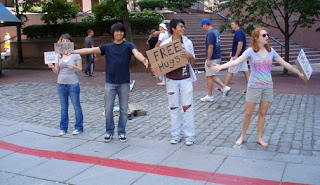 Then, since I still had a couple of hours to waste in Boston, I did what Bostonians do and went to see a movie. Brüno was hilarious!

At my home, we don't own a TV (which wasn't as hard to get used to as I feared). But when I travel and stay in hotels, the hour or so before bed is always something I look forward to. Here's how I spent tonight's dinner... 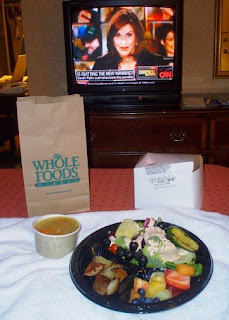 What was in that white box? Something yummy... 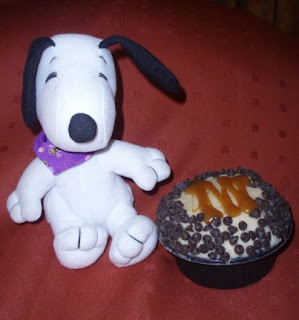 It was one of the best cupcakes I'd ever had! I even gave Snoopy, who's been my recent travel companion, a chocolate chip. But just one! Chocolate isn't good for dogs.

See ya back in California!
Posted by Jay Asher at 9:30 PM

Did the bookstore people get mad that you were writing in their books? lol.

You should come to Michigan and sign some of our books. =)

Oh, I have plenty of stories about clueless employees who don't understand why I would want to sign the books.

I actually have a frustratingly funny story about one of the stores I visited in Boston, but I'm saving that for the near future. I'm still a little too frustrated to describe it honestly.

And I would love to come to Michigan!

None of the authors I enjoy reading come to Michigan. Lisa McMann is supposed to in August though so that should be good. We need you too!

Well I just wanted to let you know that I enjoy your blog and I check back frequently. =]

And hopefully you're not frustrated for much longer. Have a nice day! =)

I forgot, but just last week I accepted a speaking gig in Lansing, Michigan for early May of next year. It's for a writing conference, but I'll try to squeeze in a bookstore signing while I'm there!

Yeeaaahhhh. Lansing is only an hour away from my house. I'm going out there in August for the MIPA Journalism Camp.


I'm so excited already and its so far away. lol. Thanks so much for telling me.

I'm so very excited that you'll be in Lansing, Michigan next May--which is my backyard. How awesome it would be to meet you personally. I also just have to say that I absolutely LOVE the picture of Snoopy. I so miss my long-ago-lost stuffed Snoopy from childhood.

Snoopy is THE coolest dog ever. I just moved into my new apartment and the first thing I did was hanging up my old Snoopy poster *g*

That "free hug" thing... I have no idea where that came from. I visited some conventions in the UK and there were people with such signs everywhere. Have you ever been to an Anime convention (I went there to see Edward James Olmos, don't ask *g*)? Thousands of "Free Huggers". You can't throw a stone without hitting one of them. Don't get me wrong, I think this is a nice idea and our world needs some more love among the people. But it is kind of strange when a 13 year old girl in a manga costume with a very short skirt (more likely: "belt") waves her sign in my direction. But still, I like the idea.