On the Road: Delaware

So far on this road trip, I've given eleven newspaper/radio/video interviews and spoken at six bookstores. My wife, a singer, always told me I needed to learn to project my voice correctly...and I'm finally beginning to think she's right.

My throat is raw! (And the massive amount of coffee I've been drinking probably hasn't helped.)

Today's stop at a Borders in Delaware was a lot of fun. The audience was full of the usual mix of teens, parents, librarians, teachers, and (increasingly) therapists. When I began to speak, we also had the traditional two empty seats in the middle of the front row. 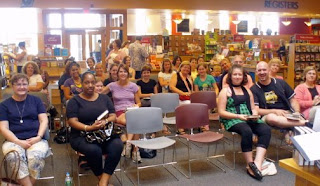 During my presentation, the crowd slowly grew. I was trying to project my voice (incorrectly, I'm sure) over the espresso machine, and I began to notice several people who were browsing throughout the store begin to move closer and closer to hear what was going on. Of course, that made me try extra hard to get the audience to laugh. So while I focused on the people in the chairs, I also kept an eye on the browsers. It became a challenge! And soon there was a fairly solid wall of people standing around the chairs...many of whom had probably never heard, or cared to hear, a YA author speak.

When I saw a few of those people in line for an autograph, I was glowing inside (which, apparently, makes the throat even rawer)! 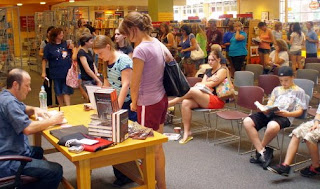 The person who volunteered to read the part of Hannah Baker today continued the streak of very strong readers. Thank you, Stella! 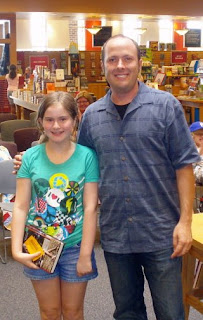 Tomorrow's bookstore event should be interesting. A few people from Penguin (past and present) will be there.

I love reading these posts about your book tour. I'm glad to hear it's so successful! That has got to be a cool feeling--having onlookers become enthralled by your talks and end up in the book-signing line.

Just wanted to let you know I finished the book last night, and WOW! Amazing book!!! I can not WAIT to see you in Bridgewater tonight!!! YAY!!!