On the Road: California & Washington

I drove up to Oakhurst, California, which is near the entrance to Yosemite National Park. Willow Bridge Books hosted me as part of the Central Valley Writers' Symposium. At most of my speaking gigs, I have a lot of fun with Powerpoint presentations. But for this book tour, I'm doing it the old-fashioned way. Just an author and a microphone! Turns out, it can be a lot of fun to go off-script and meander around with what you're saying.

One of my favorite things to do at book events is to do a co-reading of Thirteen Reasons Why. I read Clay's lines and get someone else to read as Hannah. I planned on getting photos from each stop of me reading with a different Hannah, but so far, it hasn't been working out.

But here's who played Hannah on Day One: 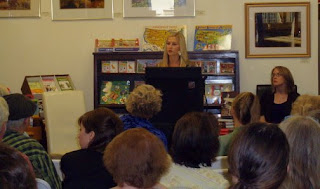 Kelly Sonnack is an agent at the Andrea Brown Literary Agency. ABLA is the agency which represents me, so this was kind of like doing a reading with my literary cousin.

I flew up to Seattle, Washington and got picked up at the airport by a media escort. A media escort! Sounds fancy, doesn't it? It feels fancy! She drove me all over Seattle so I could stop by several bookstores and sign their copies of my book. Then she drove me up to Bellingham, Washington so I could speak at Village Books. 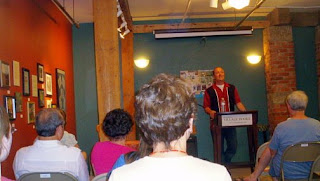 Once again, I didn't get a shot of me reading with a member of the audience. But here I am signing her book! Unfortunately, I also forgot to write down her name. But I zoomed in on this photo, and I think I can read what I wrote in the book. So thank you for doing a great job, Kaily! (It is Kaily, isn't it? That's what it looks like!) 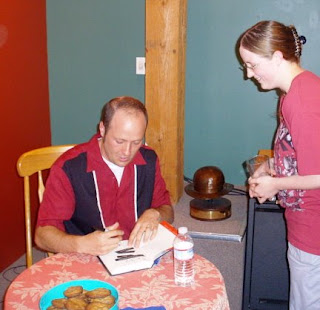 I happen to have an uncle and aunt living in Bellingham, so they took me out to eat and I finally got to see their house. They have a creek in their backyard. A creek! In my backyard, all I have is a broken sprinkler.

After driving back to Seattle, I was able to make the final hour of a party with some fellow writers. Here I am with Martha Brockenbrough, Holly Cupala, and Martha's cousin, Isabel. 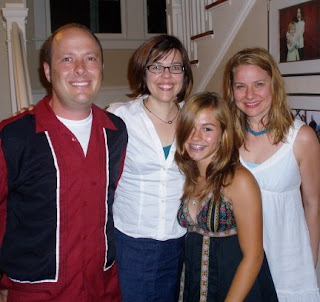 And then I signed Martha's copy of my book... 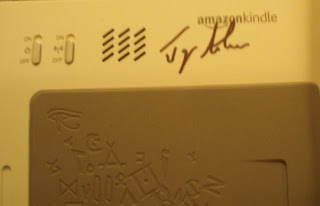 That's another first for me!
Posted by Jay Asher at 1:00 AM

It was fun to chill with you last eve, Jay!

And your daughter? So cute!

May I ask...What is the last picture of? I cannot seem to figure it out.

That's the back of an Amazon Kindle. So she has a lot of books stored in there...but I was the first author to sign it!

Hi Jay - It was so wonderful meeting you tonight at Anderson's. You are so funny and gave one of the most insightful author talks that I've heard.

That autographed kindle is hilarious. I am so opposed to kindles myself though, I much prefer the feel of a real book in my hands.

Hope you're having a great summer, touring and working on your mysterious work-in-progress book.

Lucky guy to hang out with two such cool writers as Holly and Martha. Sounds like they had quite the spread too. Too bad I missed your swing through Washington but good luck with rest of your tour.

Aww. You signed a Kindle? How funny. lol.

I am so happy Jay signed my Kindle. I love real books, too, and would have loved for him to sign it. But I had an URGENT NEED TO READ his book when I was in an airport (on my way to interview the Jonas Brothers, no less), so I downloaded it. Very glad to have the signature and Jay's presence in my home. :-)