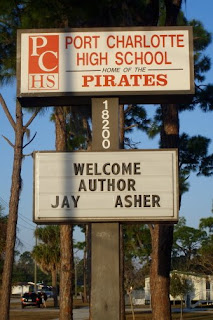 I arrived at Port Charlotte High School nice and early (just in case I got lost...it happens) to have breakfast with members of the faculty. Then I was off to give the first of three multi-class presentations. 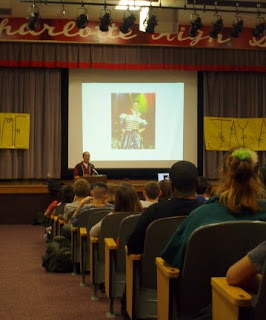 Yes, that's Vanilla Ice on the screen. And yes, it actually makes sense in my speech. At least, I think it does.

I don't know if other authors enjoy speaking at high schools as much as I do. But I remember back when I first began writing Thirteen Reasons Why, realizing that if it got published I would have to do a lot of these speeches...and that terrified me! For one, in college, Speech was the one class I dreaded. And two, I was so thankful to leave high school, did I really want to go back?

But it's honestly one of the best perks about being an author!

After each presentation I signed a bunch of books and discussion guides and bookmarks and even...an arm. 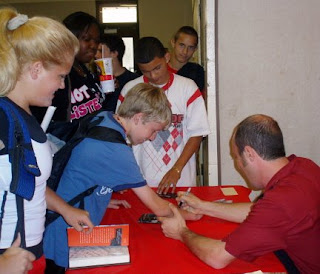 For lunch, I ate pizza with students who earned the most points in a read-a-thon. They raised money by getting people signed up to pay a certain amount for each page read, all in order to fly me out here. And since I've been having so much fun during my visit, I've gotta say, "Thank you!" 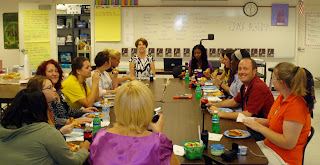 After the main presentations, I spoke to the school's book club. And there is something very cool about the following two photos. The first one has me hidden among the book club members... 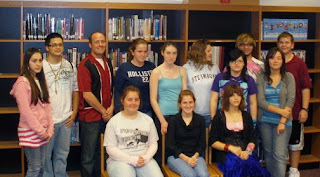 The next has me with their officers... 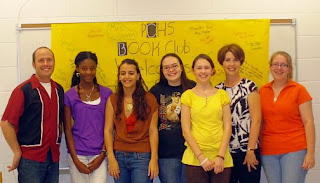 So what do I find so very cool about those shots? They're going to appear in the school's yearbook. I made it! Sixteen years after graduating, I'll be appearing in another high school yearbook!

Thank you so much for speaking at our school, it was a great experience. From your Camera guard!

Yes! Thank you so much for coming to PCHS, it was wonderful! I really enjoyed your speech. And if you really want to be in a yearbook again you can send us pictures every year and you can be an honorary member!

How was your visit at our Rival across the River? Hope it was good. Have a safe trip to your next spot.
The Camera Guard

A#1: I have no idea how you kept track of my camera! By the end, I stopped worrying about it and just assumed you'd have it for me when I needed it. Thanks!

A#2: Or maybe I'll just have to come back every year!

A#3 (actually, the return of A#1): That post will be up soon. And my next spot is home...where I plan to catch up on some sleep!

THANK YOU, JAY!
The entire day was better than any of us could have imagined, and the students and staff of PCHS are so grateful to you. It is a day that the students will remember forever.
We are already counting on you coming back after your next book is published, so plan on being in another yearbook for sure:-)
Thank you again, and safe trip home today!