Last Saturday, at the annual SCBWI winter conference, I spoke on a stage in front of 1,056 people! I can not even begin to tell you how nervous I was the closer it got to my speech. But let me back up a bit...

I arrived in NYC five hours later than expected because when my first plane landed, one of its tires decided to explode (which is always a tad disturbing). That slowed our ability to disembark and I missed my next flight by two minutes! But I arrived in the City with enough time to check out a crowded and loud shindig hosted by editor Cheryl Klein and librarian Betsy Bird (a.k.a. Fuse #8). Here's Ms. Fuse doing her impression of a 40's pin-up while I try to keep the camera from getting bumped. 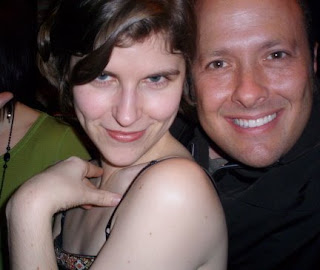 That night, the night before my speech, I was up till 3:30am, going over my presentation one more time, one more time, one more time. When I woke up, I was so nervous I couldn't eat. Thankfully, Jarrett J. Krosoczka's highly entertaining speech kept me distracted. Odd sidenote: even though Jarrett and I will never be confused for twins separated at birth, people were confusing us throughout the weekend. They congratulated me on my new (and non-existent) daughter and told his wife how much they enjoyed my speech. 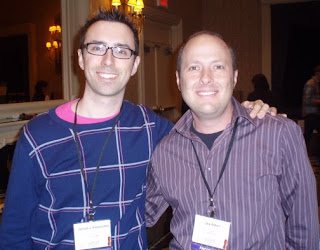 For lunch, everyone gathered in a huge ballroom where tables were dressed up real fancy. I sat with my editor/publisher and two other editors from Razorbill. Again, while the lunch looked fancy and delicious, I couldn't eat a thing. But then, after a wonderful introduction, I was called to the stage. As usual, once I began speaking I had so much fun. I spoke about the ups-n-downs, twists-n-turns, and total sidetracks taken on my 12 year journey to publication. I used a Powerpoint presentation to make it more entertaining (and to keep my face off the two huge screens they had set up) and basically tried to inspire people to not give up and to use the many opportunities available to stand out in a very crowded field. It seemed to work! After I told how winning joke contests at a conference helped me acquire an agent, the joke box at this conference began overflowing. They actually ran out of entry forms!

For those of you who weren't able to attend, here were my opening remarks:

When I was first asked to speak at this conference, they wanted me for tomorrow and they wanted something nuts-n-bolts about writing…which made me a little nervous. After twelve years of nothing but rejections on many, many manuscripts, I could speak for hours on how to help you get rejected. But in those twelve years, I sold one book. Do you really want me giving you advice on writing? When they called back and asked if I would instead speak during lunch, something more inspirational and less nuts-n-bolts, I jumped at it. My favorite parts of these conferences have always been hearing how other authors and illustrators made it because everyone who’s published got here a different way. As the years stacked up for me, that was a great thing to remind myself. So with twelve years to look back on, hopefully you’ll see something I did and think, “Hey! I made that very same ridiculously stupid mistake. That’s inspiring!”

That night, I went to Grand Central Station with Kristen Pettit, the editor of Thirteen Reasons Why, and we had a great time catching up. It was my first time inside the Station (which has been featured in countless movies), and we sat at a balcony overlooking the crowd. It was seriously an amazing sight! 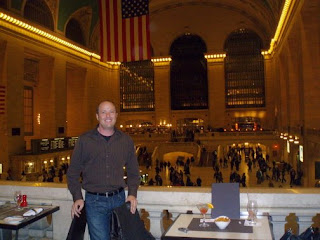 During the autograph party the next day, I got to meet Jack Gantos. I've admired his books for a long time and finally had the chance to get an autographed copy of Hole in My Life. I don't think I'll ever get used to people like Mr. Gantos, simply by looking at my nametag, knowing who I am. That's crazy! (I also got to meet his editor who...ahem...rejected 13RW.) 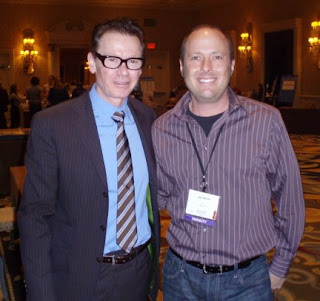 Unfortunately (though it's kind of cool, too), the bookstore at the conference completely sold out of my book. So I just had to take a photo with the handwritten sign: We are out of Jay Asher! 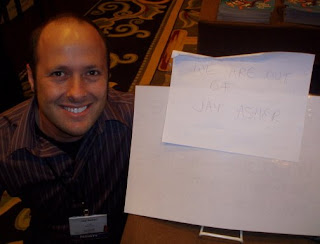 That is very cool.

I just finished your book last night, on Laini's word we should read it... It had me up half the night talking with my husband.

I was sooo close to being Hannah. I could have been Hannah. I went into social work, because I was that girl. I couldn't believe how many thoughts you got just exactly right!

Thanks for writing this book. I hope it continues to reach far and wide. I know I will be giving it away.

Jay, I was there and you did an incredible job speaking as well as inspiring that room full of writers.

This, coming from a woman who has been trying to get various things published since 1994. Sound familiar?

I enjoyed your speech and your honesty and humor so very much.

It was nice to meet you. I really enjoyed your speech and wonder how in the world you did it. It was amazing and you seemed so comfortable.

Thank you, Amber. Since the book came out, I've heard from many people who came close to being Hannah and it's so inspiring to hear how they often dedicate their lives to helping others. (And thank you, Laini, for pushing my book!)

And Danette, public speaking is such a weird thing for me. Before I get on stage, I'm always looking for a way out. (With the plane incident, I actually began fantasizing about it making me so late I'd miss my speech.) But once I'm in front of the microphone and there's no turning back, it's the most fun thing I can imagine doing. So odd!

Jay, way to sell out! (uh, you know what I mean). I'm jealous you got to meet Jack G. I just read A Hole in My Life recently and loved it so much. Keep inspiring folks out there. You're a worthy ambassador for our class!

Gah. Wish we could've gone to NY this year! Glad to hear your speech went well. Since we missed LA last year too (and will again this year!!!), we still haven't heard you speak.

Hope the writing is going well!

Hey, Jay, it sounds like it was wonderful. And your speech intro was hysterical!
Very happy for you,
Namaste,
Lee

I attended the NY conference. Your speech was one of my favorites because it was so inspirational and gave me some ideas about my writing... Y.A., an interesting area to research.

I wanted to buy your book at the conference and have you sign it, but was unable. Maybe I'll be able to catch up with you at the next one?

Thanks again for speaking. You did a GREAT job, and I'm glad I was there to be inspired.

Just wanted to say, I was at the conference (my first one!), and your speech was great. Very inspiring. It's funny to hear you were so nervous beforehand, because the person I was sitting next to and I were both remarking on how comfortable you looked up there speaking. I never would have been so chill in front of a crowd that big!
Also, your wife sounds awesome.

Jay, this was my first SCBWI conference and I'm still on a high. My husband told me that I act like I contracted A.D.D. in New York! You did a fabulous job on your speech, and it's funny you mention how folks got you mixed up with Jarrett because I mixed you both up too. However, I'll always remember the part of your speech about how you told your wife that you sold your book at the lake. I love how you took her picture - you made me cry!
You sure are inspiring, and you gave beginners like me hope.

Aw... now I am bummed that I was not there to see the speech. Is the text of this speech available? Perhaps someone recorded it for Youtube? :-)

Wait. Who are you again?

Jay, your speech was AWESOME, and it was great getting my copy autographed. I'm really glad that I'd bought it and read it ahead of the conference, as I was able to turn to the others at my table and say, "You haven't read 13 Reasons Why yet? You HAVE to."

Thanks for the inspiration! I'm glad you didn't quit!

Speech went very well... and it came at the right time having been frappe'd by my editor the day before...
But now I'm doubly frustrated that I have not had one single joke entry read at all 3 conferences I have attended. I will be traveling to LA this summer with that as my sole purpose.

You rocked the casbah, I mean conference. I especially liked the gopher.

There was something very intimate (though not in a creepy stalker way) about your speech. Like the best blog posts, it was at once intensely personal and universal. Your story holds within it the stories of so many hopeful writers (and artists) who were listening. So we all teared up when you did. And we all hope that someday, we'll be the crazyhappy writer buying a camera and driving off to the lake, anticipating the moment of saying "It worked."

I wish I had been there to listen to your pre-speech jitters (payback for you listening to mine in LA) Yes, when it gets up over a 1,000 people and there are giant screens involved...

But reading all the remarks here, it's probably time for you to realize that in addition to being a great, emotionally intuitive writer, you are a really good speaker with many gifts to give the audience...