With a few hours to burn before tonight's event, I walked over to the beach. Even though I've been to the East Coast a few times, I've never visited its ocean. And since I live near the beach in California and have dipped into the Pacific many times, I figured I should get my toes wet in the Atlantic, as well.

But along my walk I spotted some weird stuff hanging in a tree. What in the world are these things? They're three-times as long as a banana and look like crusty black socks. 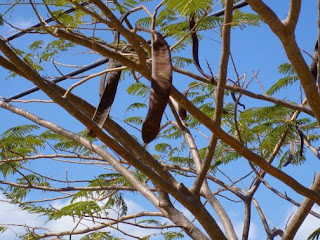 Finally, I made it to the beach. Ladies and gentlemen, it is my honor to introduce to you...the Atlantic Ocean! 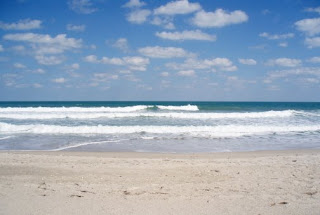 I'm actually not a big beach person. I mean, beaches are pretty. They sound cool. And Lost wouldn't be nearly as intriguing without it. But "Let's go to the beach!" is never something I say.

And yet, it was very cool to know I've touched both the Pacific and Atlantic Oceans. When I first lowered my foot into the water, my toes burying themselves in the sand, I felt kind of like Neil Armstrong when he first stepped onto the surface of the moon (but much wetter and a lot less historic). 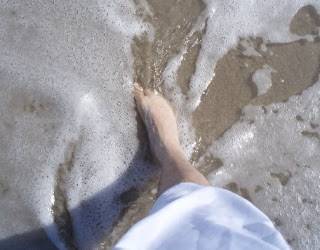 From there it was off to the Melbourne Barnes & Noble for a book discussion. I forgot to whip out the ol' camera until almost everyone was gone, but it was the most interactive event I've done...probably because it coincided with their teen book club meeting and they're used to discussing books down to the smallest detail. A lot of people were already seated when I arrived, but the lady who leads the discussions had no idea I was going to be there! So the evening had a hilarious beginning, which contributed to the relaxed and sociable feeling throughout the night.

Thank you Allison, Kaori, Steve, and Christine for inviting me to participate in your book club's discussion of Thirteen Reasons Why...even if it was a surprise! 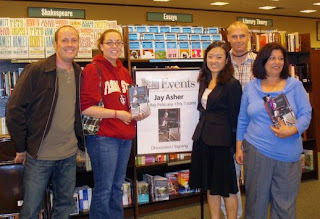 Tomorrow, I'm hopping in a rental car and heading across the state...
Posted by Jay Asher at 7:59 PM

Hey Jay,
Um, I think those things in the tree are carob pods - especially if the trunk was all knarled and story-book-ish.

Hello Jay!
I saw you at the Barnes and Noble discussion/signing on Tuesday. I was teen asking most of the questions. hehe. I just wanted to thank you for coming. You really brightened my week! I found it thoroughly enjoyable talking with you and meeting you. Thank you for your great advice! I told you that I keep getting asked to do newspaper, but I don't want to. I think Fiction is calling me like it called out to you. Just...thank you again! Good luck with everything (especially the movie deal. that would be ROCKIN if you got one!) ;)
-Marie
-thekbseries@yahoo.com

It was great meeting you, Marie. Definitely keep going with that fiction. And when one of your books sell, please let me know!