I won’t be home this Valentine’s Day, so on Wednesday my wife and I went to a nice restaurant for lunch…and we saw a famous person. Two of them, actually!

Then a real famous person came in and sat at the table behind us. He was having a nice meal with his wife, so I was hesitant to disturb him and ask for a photo. But JoanMarie offered to do it. “That way,” she said, “you’ll have something cool to put on your blog.”

Here’s the thing. For most of her life, my wife hasn’t been much of a movie buff. Only recently have I been able to convince her that staring at a flickering light while holding a bag of popcorn (extra butter) and a cup of soda (not much ice) was a good way to experience art…just like visiting a museum.

But she’s still not too familiar with the names of the artists. So before she headed over with our camera, she verified, “He’s Russell Crowe, right?”

“What? No, Russell Crowe’s the guy from Gladiator.”

I was busting up now. And I was so tempted to let her ask Kurt Russell for a photo, even though it wasn’t Kurt Russell. “Can I just tell you who it is?”

“No. He was in Jurassic Park, right?”

By then I was in no shape to have a photo taken with anyone. And JoanMarie was still tossing out names and movie titles, but I don’t think she was even trying to guess correctly anymore.

So I don’t have a photo with Jeff “The Dude” Bridges to share with you (The Big Lebowski, Iron Man). Thing is, I know there would’ve been no confusion whatsoever had it been Johnny Depp sitting at that table.

The last thing she said before we left the restaurant: “You’re probably still going to blog about this, aren’t you?” 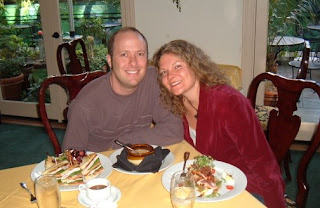 Meet-up:
All next week I'll be visiting schools, bookstores, and libraries in Florida. If you're around, here are the open-to-the-public appearances I'll be making:

Too funny! I once bumped into Marg Helgenberger (CSI)in the FAO Swartz store in NYC. My husband and I debated if it was really her for five minutes and then I finally mustered up the courage to speak. I was so afraid of mis-pronouncing her last name that I went over to her and said, "Marg?" When she looked up, I think she expected to see someone she knew and when she didn't recognize me she just glared. I can't even remember what I said after that because I felt so embarrassed. So tell your wife not to feel so bad! Besides, it DID make a really cool Valentines blog post!

Actually, my wife's proud of the fact that she doesn't know many of the celebrities by name. In fact, she thinks it's weird that I do.