I only had two real conversations today…both with women named Nancy. The first was with Ms. Hurd. If you check the acknowledgements page of Thirteen Reasons Why, she’s on it. In college, it was her Children’s Literature Appreciation class which inspired me to pursue this writing thing as a career. And just by chance, we were on the same flight out of town this morning. 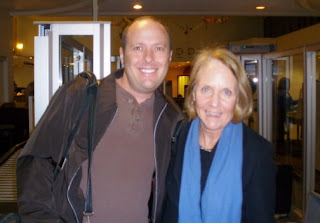 Once we landed in Phoenix, we ran full-speed toward different planes, but any chance encounter with Ms. Hurd is a wonderful opportunity to say, “Thank you!”

When I arrived in Florida, Nancy #2 picked me up. Ms. Grout works for the Brevard County Public Library system where she has a very important job. But for the next three days, she’s also my chauffer! I’ll be speaking to several groups while I’m here, which is very exciting, but the fun began on the drive from the Orlando airport.

I’m a NASA buff, and this part of Florida is heaven to NASA buffs. In a few days, I’m gonna steal myself some time to visit the Kennedy Space Center, but even on the drive I could see the VAB (Vehicle Assembly Building) out my window. That’s where the shuttle is probably sitting right now as it prepares to go up in about a week. Ms. Grout pointed out all sorts of cool things as we drove, such as the long stretch of single-bedroom houses which look like they sprouted up all together in the 1950s. And they did! That’s where the professional space buffs lived when the space program was just getting started.

Oh! And Nancy #2 can actually see shuttle launches from her office in the library!!!

This entire area is space crazy. There are space shuttles painted on walls of businesses that have nothing to do with space exploration, and it would be quite an accomplishment to count every miniature space shuttle on display around town. In fact, I just opened the hotel phonebook and there’s almost an entire page of business names beginning with the word space. Everything from Space Age Adult Books to Spaceport Realty. (I swear, I did not make those names up…those were the first and last listings.)

In my hometown, the local section of the newspaper is titled LOCAL. Here, it’s called SPACE COAST. And that rocks!

One more thing before I turn on the TV (we don’t have a TV at home…so hotels offer a wonderful excuse to turn on, tune in, and drool). The restaurant beside my hotel has the best hoagies ever!

Warning: vegetarians may wanna turn away. 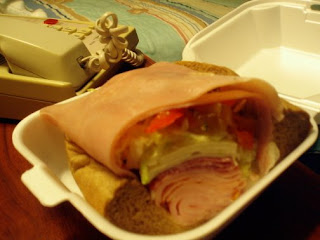 Note: the telephone was definitely not designed with space-age technology.
Posted by Jay Asher at 6:32 PM

Sounds like you're off to a great start! Best of luck with your speaking engagements and enjoy all the space stuff while you're there. I once caught an evening launch at Kennedy in 1998 - the ground shook and the sky lit up like it was the middle of the day. I'll never forget it.

Space Camp Musical should be book #2!