It was supposed to take three flights to get from my home to the sixth state on the 50 States Against Bullying campaign. But it only took two flights! Well, two flights and one very long drive.

I flew from my home airport to Los Angeles, and from Los Angeles to Houston, which looked nice while descending.

Cancelled? The last flight of the day was cancelled? I had to be at an Alabama high school the next morning at 8am! So I called the booking agency. There were no flights that could get me anywhere near where I needed to be until 10 hours after I was supposed to speak, which didn't seem very logical. So I rented a car. A truck, actually, and at 10:15pm I began a 7.5 hour drive from Houston, Texas, through Louisiana, through Mississippi, and into Alabama. I got to my hotel around 5am, slept 1.5 hours, and then went to Fairhope High School, which is beautiful! 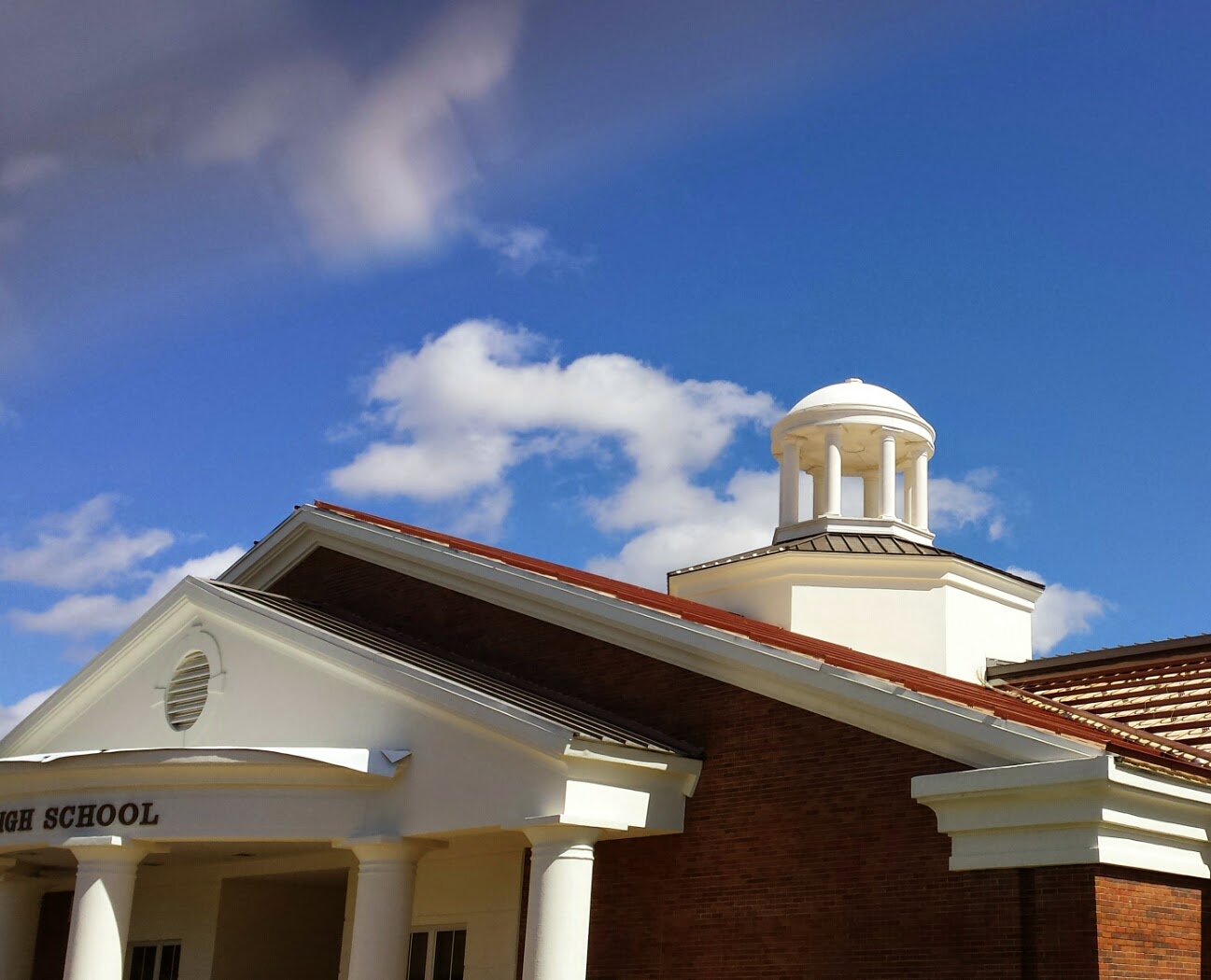 It was easy to figure out where I was speaking. 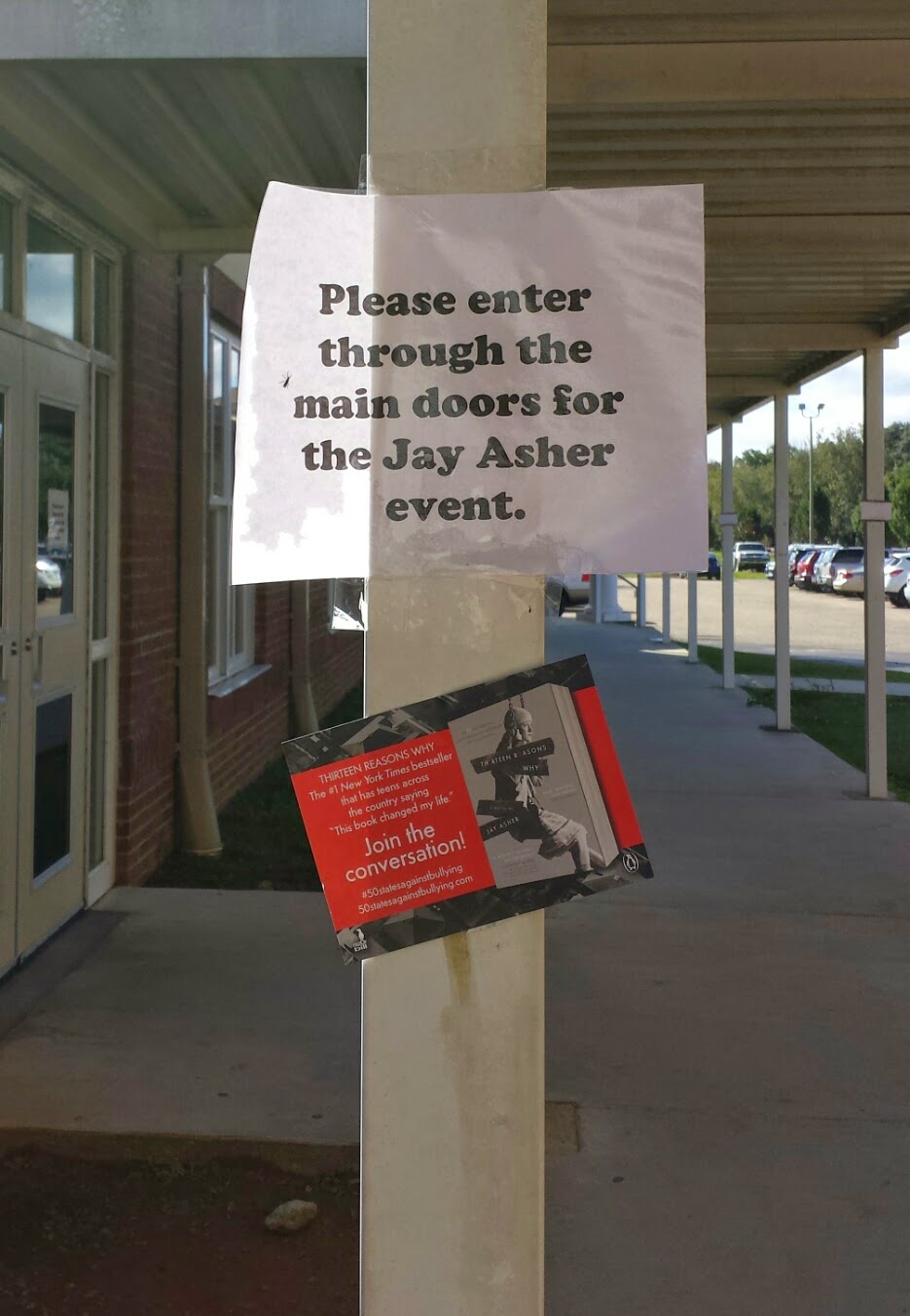 Before the school announced that I would be visiting, they had students create art pieces depicting 13 of anything. (For example, someone cut-n-pasted 13 photos of Ryan Gosling.) The pieces were up all over school, finally collected around two big red numbers. 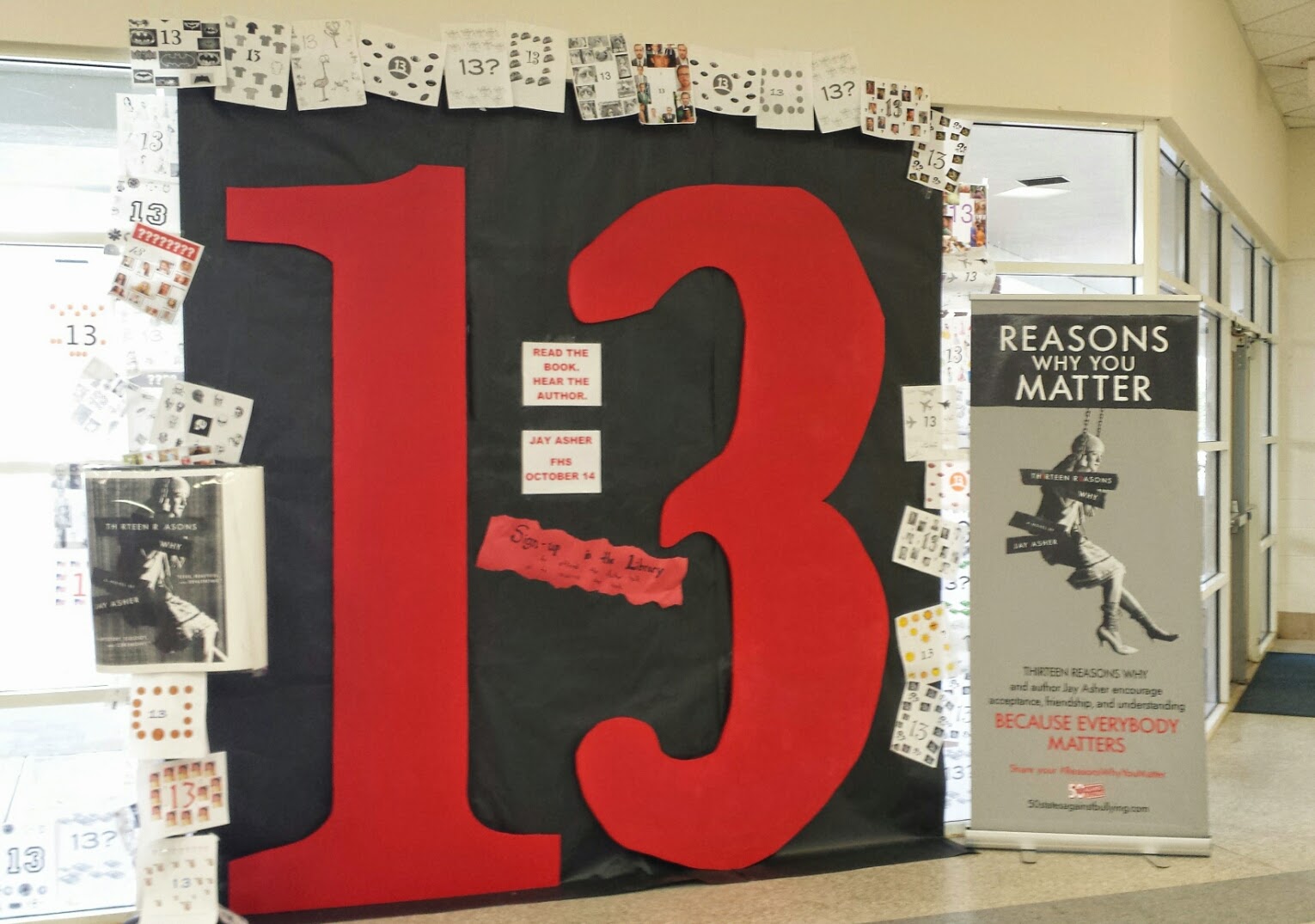 Entering into the theater today, students were greeted with artifacts from a bygone (but totally awesome!) era. 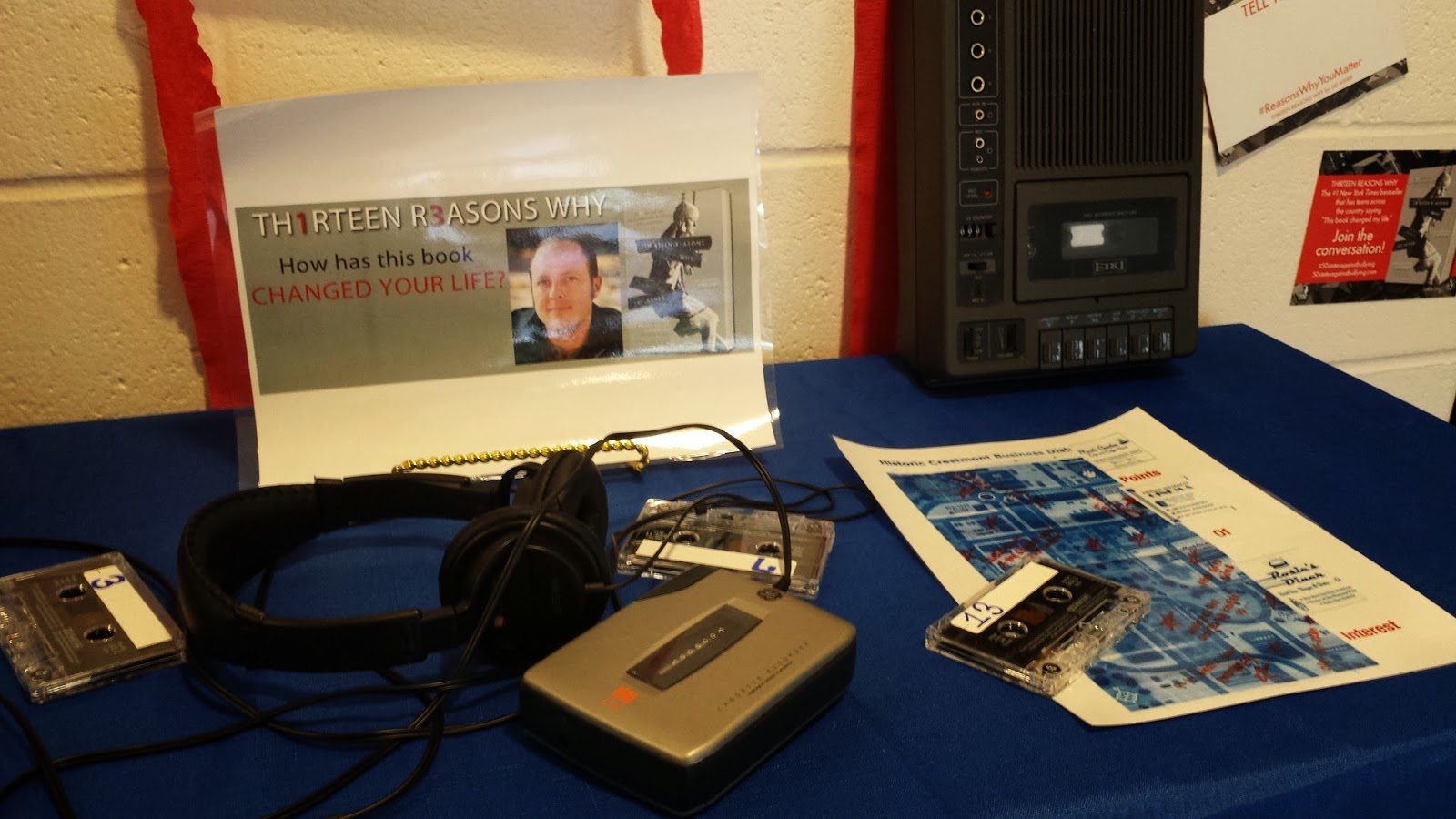 I spoke in the theater to two groups of students, and the majority of them had read Thirteen Reasons Why. Many of them had already discussed it in classrooms or in book clubs. 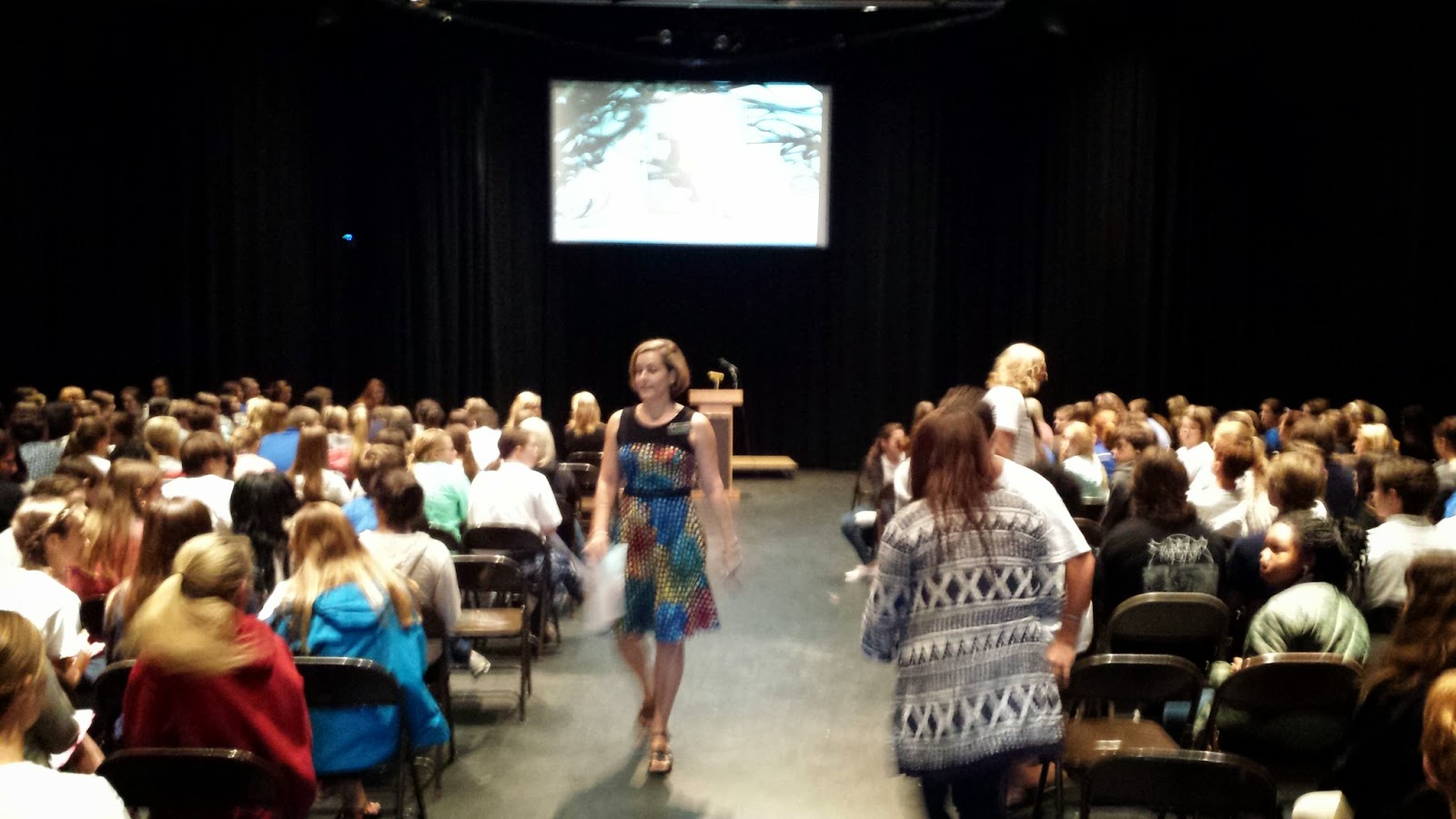 After my presentations and book signings, the booksellers from Page & Palette took me to a delicious lunch (after I perused their bookstore, of course). 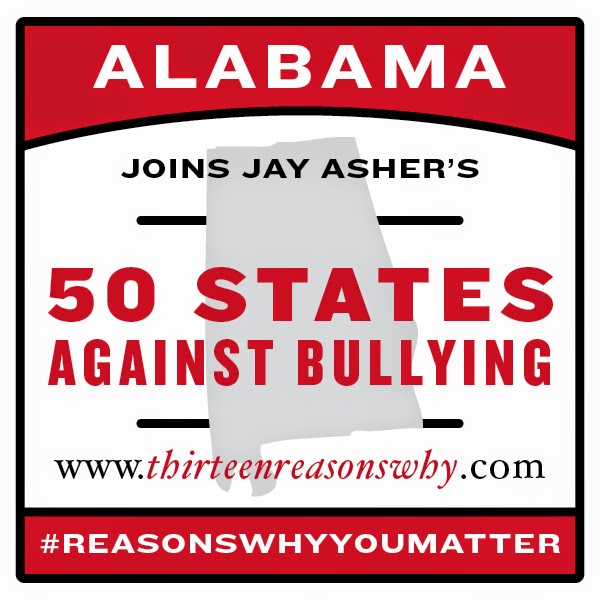 And now I'm sitting in the airport on my way to state number six.

The flight, they say, is slightly delayed.
Posted by Jay Asher at 5:54 PM

Wishing you safe travels regarding the rest of your journey. Impressed you pushed through, despite the flight hurdle.

Will you be stopping by Auburn Junior High School in Auburn Alabama because that would be a great school to visit about that and i would be very happy and amazed if you could come to AJHS
if you have any questions contact me at
phoenixcomputing@inbox.com
or if you are curious
sites.google.com/site/phoenixbatchprogramming