On our third stop as we move across the country to talk about The Future of Us, Carolyn Mackler and I spoke at the Bethesda Library in Maryland. Politics & Prose supplied the books, which is the coolest name for a bookstore based in Washington D.C. 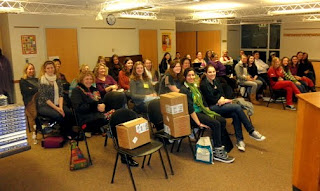 When we weren't at the library, Carolyn and I were driving from bookstore to bookstore, signing whatever they had in stock. So if you live in a city we're visiting on this tour, but you can't make it out to see us, there's a good chance several places in the area have signed copies of our books.

The next morning, Carolyn and I were up at 4am to fly to Georgia. There, we spoke at The Galloway School. It was our first time speaking at a school together, so we had to take a photo by their marquee. 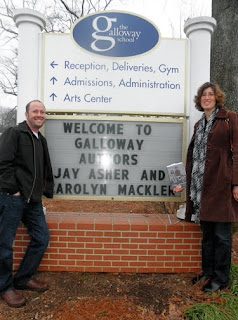 And then Carolyn had to pull out a plastic spoon to scoop some Georgia soil into a baggie. She's collecting soil from each state we visit for her son's school project.

She's such a good mommy! 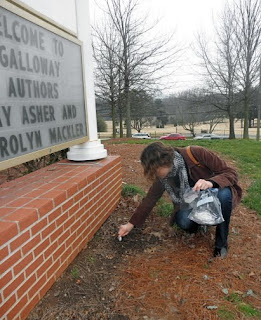 Even though I've enjoyed every school visit I've ever done, I still get nervous before I speak. Really nervous. Why-do-I-do-this-to-myself nervous. Thankfully, so does Carolyn! (Nervousness loves company.)

But we had a wonderful time! 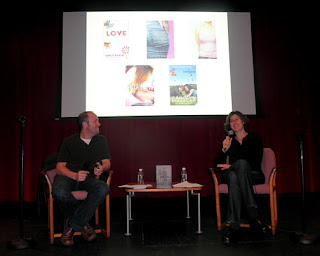 A student named Amanda showed me a Thirteen Reasons Why trailer she'd made, which includes some of the best acting I've seen in a fan-made trailer. (The scene on her computer is of Amanda/Hannah sitting on a swingset.) 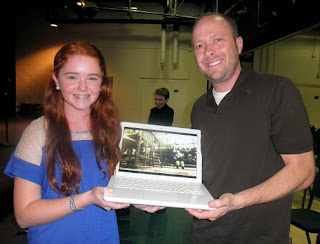 In one part of our presentation, Carolyn and I talk about editing The Future of Us, and we share four versions of the opening sentences to our book. When we read the final version, the students began to laugh. But we didn't understand what was so funny about "I can’t break up with Graham today, even though I told my friends I’d do it the next time I saw him.  So instead, I’m hiding in my bedroom, setting up my new computer while he plays Ultimate Frisbee in the park across the street."

And then they pointed out a student named Graham who plays Ultimate Frisbee. 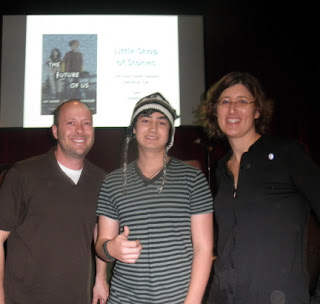 In the evening, we spoke in the loft at Little Shop of Stories, a beautiful store in Decatur. They had the best wall art! 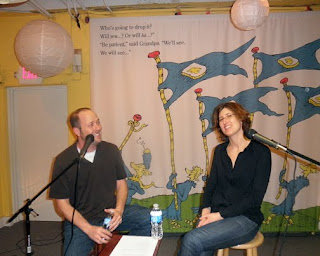 In attendance, we were lucky enough to have Jessica Khoury, who has a book coming out with Razorbill this October. So she's basically our sister! 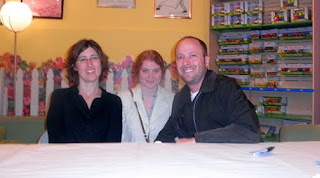 Awesome! How funny that you met a kid named Graham who plays Ultimate Frisbee! Too cool. Enjoy the rest of your tour you two! :)

P.S. Carolyn IS an awesome mom to help her son out with his project like that!

Hey Jay, is the 13 Reasons Why movie still gonna happen? We haven't heard much about it in a while.

I'm glad your having such a great time! I couldn't make it to any of the signings but I ordered a signed copy from Politics & Prose, so I'm eagerly awaiting that! Enjoy the rest of the tour!