It Starts With Me: Journey of Hope

When I was trying to write funny books for young children, I never would have imagined I would one day be speaking at conferences dealing with suicide and bullying. Within the past several days, I spoke at two of those conferences, and it was a huge honor to participate.

First, I spoke at an event at Cuesta College. It Starts WithMe: Creating a Community Without Bullying was an all-day event. Some speakers shared personal stories of being bullied, most gave tools to address and combat the issue, and a lot of time was spent just trying to define bullying.


I gave a breakout presentation focusing on Thirteen Reasons Why. It was the first time I shared my reasons for writing each chapter in the book. 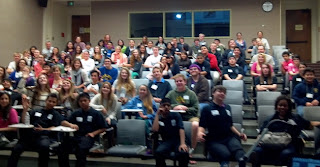 Then I gave a presentation to all of the attendees, having to stop to keep the tears in check more than I ever have in one of these presentations. Mostly, that was because I could see tears being wiped away by several people in the audience. Feeling so connected with them over an issue I care so much about is overwhelmingly beautiful.

(Okay, you're right, they don't look like they're crying in this photo.
It was taken when I was being introduced!)
Three other authors who spoke were JodeeBlanco, Trudy Ludwig, and Kathryn Otoshi. Getting to meet or get reacquainted with them during our lunchtime book signing was a definite highlight. 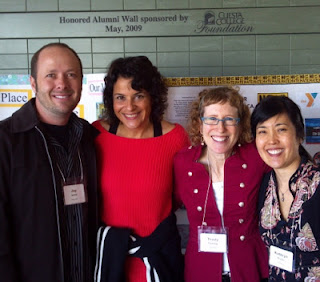 Yesterday, I gave a presentation at New Life Church for Journey of Hope 2013, put on by Transitions-Mental Health Association. This conference raised awareness about suicide, with over 30 organizations represented in the lobby, places people can turn to if they needed help, or where they can find help for others.

The stories shared on that stage brought so many people to tears. Because I was speaking near the end, I was just glad I wasn’t wearing mascara. (And yes, that was the first thing I said when I stepped in front of the microphone. Sorry, it just came out!) After my keynote, they played my wife’s recorded version of Soul Alone, which also plays at the end of the Thirteen Reasons Why audiobook. The lyrics to that song make up Hannah’s poem in the book.

The woman sitting just to the left of the podium in the first photo is Wendy Thies Sell, the event’s emcee. At the very end, we both went back onstage for a fun Q&A. 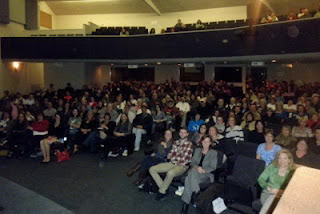 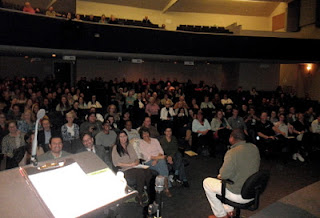 After the program, I sold out of both Thirteen Reasons Why and The Future of Us. So I came up with a plan and met several of the attendees at the Barnes & Noble a few cities over for an impromptu book signing.
Thankfully, I didn't know KSBY was filming my presentation earlier that evening. Knowing 500 pairs of eyes were on me was plenty!
Posted by Jay Asher at 10:04 PM

How wonderful, Jay! Thank you for sharing. This made me smile :)