On Being a Wallflower

On Friday, to celebrate Banned Books Week, the college in my hometown hosted Stephen Chbosky, the author of The Perks of Being a Wallflower. He also wrote and directed the movie based on the book, now opening across the country to amazing reviews.

I'd never met Mr. Chbosky, but was looking forward to hearing him speak. 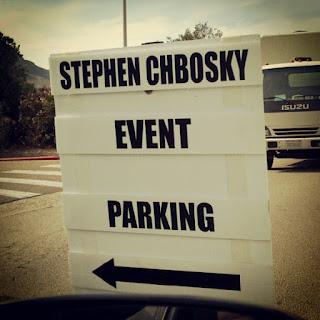 The auditorium was packed. Every seat was taken. Many people had to stand against the walls, and not because they were wallflowers. (Sorry, but you have to agree that I almost had to go there, right?)

The two most comfy seats in the room were reserved for Mr. Chbosky and his interviewer, Victoria Billings, a journalism student at the school. 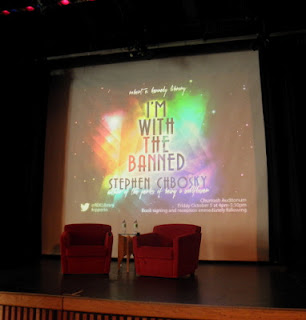 I love hearing authors speak. Some are hilarious, while others are mostly serious. (Mr. Chbosky was a nice mix of both.) But as long as the authors are sincere, I always leave inspired. 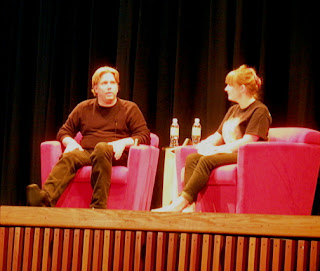 After the interview and Q&A, it was time to stand in line for an autograph. The line wrapped around the room in a circle, literally beginning at one end of the autographing table and finishing at the other.

Some people around me knew I was also a "banned author" and said I could cut to the front of the line. I told them that wouldn't be fair to everyone else, which was true. But also, I found myself imagining a scenario where I did squeeze my way to the front. I would tell Mr. Chbosky that they let me cut because I wrote two books called BlahBlahBlah and YadaYadaYada (not their actual titles), and he'd say, "Oh, really? I've never heard of them. Good luck with your writing!"

And that would crush this sensitive author's soul.

So I stood in line until it was my turn... 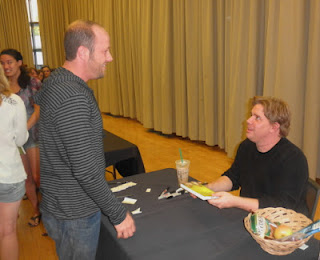 And he totally knew who I was!!! 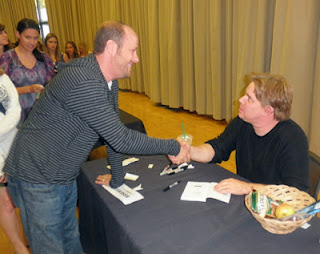 Seriously, I hope I never get used to this. 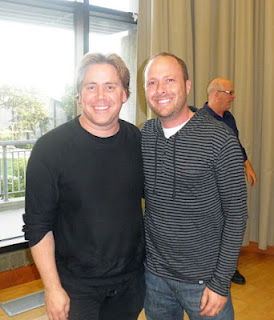 If you haven't already done so, go read his book! And go see his movie!﻿ I'll be doing the same on the day it comes out here.
Posted by Jay Asher at 9:03 AM

That's pretty awesome, Jay. And yeah... don't get used to it, cuz no good can come from it.

I was just telling someone that my memory from the first time I read Wallflower (as an adult, by the way) was that I was reading along, sipping coffee and ran into a single, unexpected, not-really-important-to-the-story paragraph that made me laugh so hard I did a classic spit-take. Good times. Good times.

So jealous! Wish I was at that event. I did read the book AND I am doing a paper on it for my grad school YA Realism class. AND I cannot WAIT to see the film! Thanks for sharing!!!!

Sounds amazing! Here's to never getting used to...

I read the book and really liked it, and then I saw the movie, and it impressed me too. You two look nice in the photo! :-)

I loved his book and your 13 Reasons. I haven't read your other yet. That's so amazing that he knew you! Congrats on some sort of form of making it :)

Sounds like a great event, and how cool is it that he recognized you even while you were being humble and 'blending in'.

The movie has piqued my interest in the story, and so has your blog post. thanks for sharing!

SO happy the film is done so well. I love that some of the lines that really resonated for me in the book, are utilized so beautifully by that phenomenal cast.

Oh! And having come across this post via a Judy Blume retweet about Perks, I have now gone to Amazon and ordered your Thirteen Reasons Why. :)

Haha! What a great name/label for those authors who have had their book/s banned.

Looks like you had a blast. I've only been at one author event (Kristin Cashore!) and luckily it was amazing. And yes, I plan on reading Perks. I've had it on my shelves for years.