On Monday, I spoke at the high school and public library in Jefferson City, Missouri. But first, on the night I arrived, some teachers and librarians took me ghost hunting. (They apparently knew I'd be into that sort of thing. I'm not sure why they knew that, but they were so right!) We took a ghost tour of the old Missouri State Penitentiary, which opened in 1836. 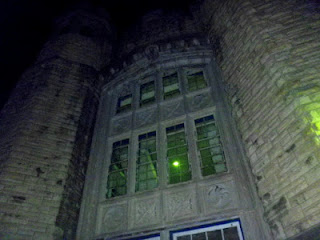 Creepy, right? The gas chamber was even creepier! They allowed us to sit in the chair within the chamber, but I'm happy to say I finally discovered something a little too creepy for me to partake in. 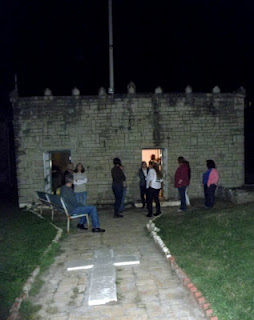 We spent a lot of time exploring the cells, learning about the famous criminals who were housed there...as well as some who "never left." Mwah-ha-ha!

As book dorks, we were fascinated by the literature left behind. 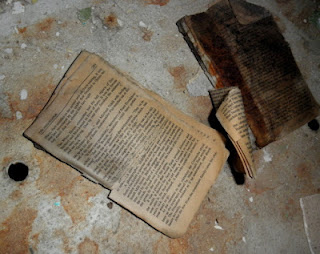 The guide let me hold and monitor the device that detected jumps in levels of electromagnetic energy. In order to hopefully catch a ghost on camera, she suggested that we take two or three pics in the same location so we could compare them later. That way, it'd be easier to notice anything unusual, such as puffs of mist moving around us. Here I am holding the energy detector in...what else?...cell 13. 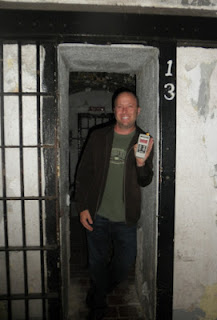 Here's another in a series of pics taken in the same spot. And while I'm still not sure if I fully believe in ghosts, it looks like we may have captured something...peculiar...in this shot. 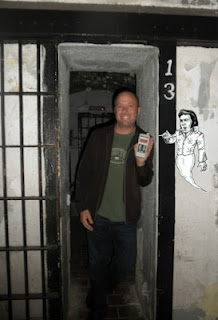 It was homecoming week at Jefferson City High, home of the Jays. The theme for the week? Jaypocalypse! 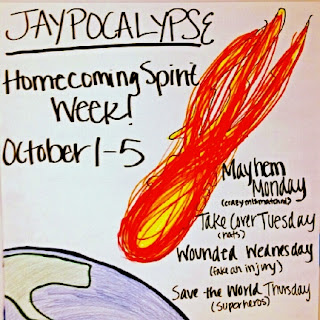 They also had signs declaring Jay Pride, which I allowed myself to think was entirely due to my visit.

Here are some of the students who came to hear me speak, a mix of entire classes and students who asked to be excused from class to attend, which always makes an author feel good. (Jay Pride Forever!) 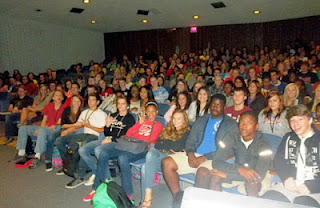 And here's the rest of that group. 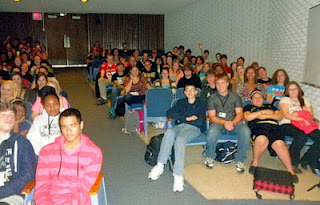 It's hard to tell in the above photos, but the homecoming theme of the day was Mayhem Monday, where several students dressed funky. In the first group shot above, near the middle of the very back, it looks like someone is raising her hand to ask a question. She wasn't. But I kept almost calling on her doing the Q&A.

Hair's the source of all my confusion (and no, I didn't misspell the first word in this sentence). 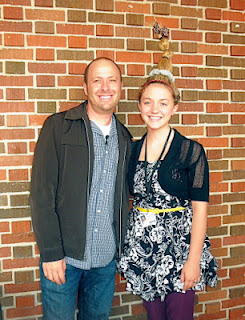 Then I took a tour of the Missouri capitol, which had some great exhibits. They had a few paintings done in a perspective that changes as you walk by. Notice how far the bridge extends to the right side of the painting. 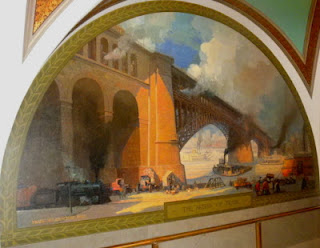 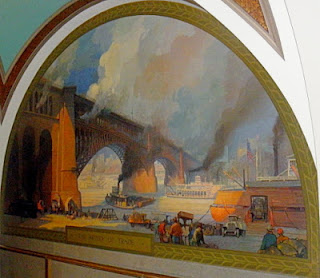 After my recent trip to Germany, I gained a new respect for miniature recreations of historical events. Here's the Battle of Island Mound, the "first Civil War engagement that involved African-American troops." 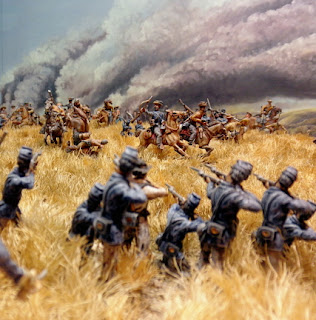 The capitol had busts of famous figures from Missouri, including one of my idols, Walt Disney. What am I whispering in his ear? None of your business! But he obviously thinks it's a great idea. 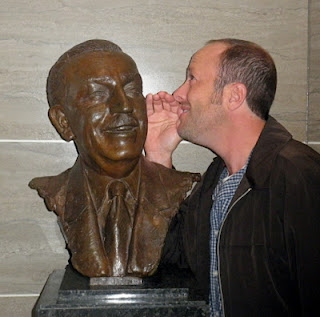 While I forgot to take photos at my next event, a workshop at the high school where I discussed my thoughts on writing suspense to about 40 students, I left inspired by their interest and questions. I can easily imagine a few of their faces appearing as busts in the Missouri capitol one day. (I know, that was overly cheesy. But I couldn't think of a better way to end that paragraph and my flight's about to board so I don't have time to be too creative!!!)

In the evening, I also forgot to take a photo of the people who came out to hear me speak at the public library, including a group of students who traveled on a bus from a nearby college. But everyone there was...awesome? (See, that's what you get if you don't want cheesy.)

I did get a pic of the high school faculty who helped organize my visit. 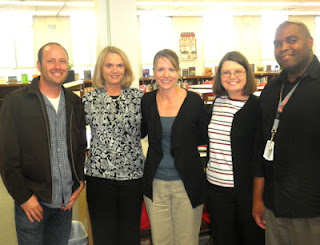 And here I am with the librarians from my evening presentation. 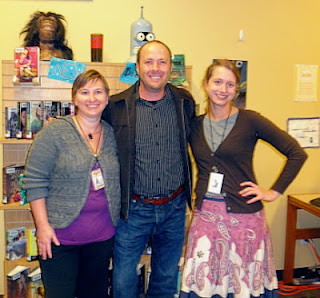 Missouri, thank you for showing me a great time!

(See, cuz Missouri's the Show-Me state. Still too cheesy? Too bad! My flight's boarding!)
Posted by Jay Asher at 10:16 AM

That ghost tour sounds like the coolest thing in the world! A city near me does one too, and we did it two years ago on Halloween. They even let us go into the graveyard at night! We got to see all these old areas under a main strip of street that was speakeasies! I've heard that Savannah, Georgia is the place to go to do ghost tours!