Backstage to the Future: The Codename

[First in a series of posts about collaborating on The Future of Us with Carolyn Mackler.]

I have a semi-crazy idea to run by you. Now a good time?

I’d given a quote for Carolyn’s latest novel, Tangled, but other than that, we didn’t know each other. Still, she was one of my favorite authors, so of course I wanted to hear her crazy idea. Even though neither of us had ever tried writing a novel with someone else, that was her crazy idea. And since I love crazy ideas, I thought we should give it a shot!

We both knew the collaboration could fall apart. Just because we were fans of each other’s books didn’t mean we could write well together. We wanted to come up with a premise and write a few chapters before letting anyone know what we were up to. If we couldn’t agree upon a premise, or didn’t mesh well creatively, no one would have to know we’d even tried.

To go along with the clandestine feel of the operation, we needed a codename. So we jumbled up the combined letters of JAY ASHER and CAROLYN MACKLER and began referring to this as a project of the… 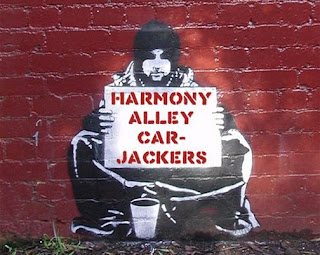 Carolyn’s Two Cents: My first cent is a question, Jay. Should I read into it that in your first paragraph you wrote Carolyn once followed by crazy three times? Three times! And hey, you have to admit it wasn’t such a crazy idea after all. We had a blast (but more on that later). My second cent is the whole Harmony Alley Carjackers thing. Remember how I originally thought that you scrambled the letters of our names by yourself and I chocked you up as some kind of genius? But then you told me you used a web program to do it. Not that you’re not a genius, of course.
Posted by Jay Asher at 6:20 PM

Hey, he's still a genius for coming up with the idea of using that program, right? ;)