The Tension of Contests

This week, the paperback edition of The Tension of Opposites by Kristina McBride was released. The quote on the cover calls it "Tense! The constant push and pull of friendship, pain, love, and jealousy is beautifully drawn. A definite must read." If I were you, I'd listen to the guy who said that (okay, it was me) because he only has your best interest in mind. 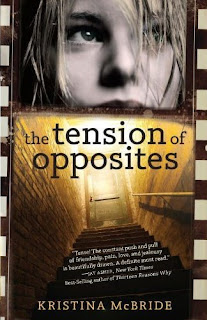 Here's the premise of the book:

For those two long years, her best friend Tessa has waited, living her own life in a state of suspended animation. Because how can she allow herself to enjoy a normal high school life if Noelle can't? How dare she have other friends, go to dances, date boys, without knowing what happened to the girl she thought she would share everything with?

And then one day, someone calls Noelle's house. She's alive.

A haunting psychological thriller taken straight from the headlines, The Tension of Opposites is a striking debut that explores the emotional aftermath of a kidnapping on the victim, and on the people she left behind.

To celebrate the paperback release, I'm giving away a copy of Kristina's book, along with:

To enter, all you need to do is leave a little info in the comments section of this post by midnight (PST) on Monday, May 30. Tell me your name and three things no one would say when describing you. In other words, because this is a thematic contest, how would someone describe the opposite of you. For example:

After entering, check back on Tuesday to see if you've won. There's no need to leave your email because I'll tell you how to send me your mailing address when I announce the winner.

(THIS CONTEST IS NOW CLOSED)
Posted by Jay Asher at 2:15 PM

I really want those poptarts. xD

What a fun contest & prizes!

Hmm... Three things no one would say when describing me?

Thanks for the contest Jay! This. Is. Awesome!

Optimistic
Enemy to all Animals
Illiterate

Niki Moss
1) Tall
2) Mathelete (Unless we're talking some sort of special math Olympics, but probably not even then.)
3) Chocophobic (Again: Mmmm, Skor.)

thanks for the contest!

hey Jay it was really cool to see my art on your page, hopefully I can actually finish it and send it to you.

Candyland
Icing from the can hater
Town gossip
One-upper

Thanks for the contest! Please only include me if you are making this international! (Couldn't find any mention, so I just entered!)

My 3 non-descriptors...
*laid back
*life of the party
*sexy

Congrats again on the movie and the book! Joan

the opposite of me:
non-reader
reluctant to share books
addicted to video games

Fun entry idea! Thank you for having such a wonderful contest :)

Organized
Even-tempered with no tendencies for melodrama
Tall

2. Would rather do anything to avoid reading.

I had fun doing this :)
Seeing as i dont have a google account or anything my facebook is :
http://www.facebook.com/Aimeef.fb

Aaron Saenz
Hateful
Ignorant
All over the place

hahaha that was fun!

Donut-phobic
Too dumb to read a book
Hates writing

Jara Amarillo
1. Despises books
2. Loves statistics out of all her courses
3. Hates all genres of music

the opposite of me?

Athlete
Pickle lover
A beast in the kitchen

I'm in, if the giveaway is international. I've heard great things about these books and would love to try them myself.

Loather of the written word

count me in.
iris


Ps: I know my name sounds french speaking - which I'm, but I've been living in California for a while, so I'm in the US.
Thank you for the contest!