Have you ever had your carry-on luggage taken from the overhead bin? One that contained all of your clothes, other than what you were wearing, for a very important trip? Because, y'know, a purple suitcase looks just like a green suitcase!

Last week, my whole family spent several days in NYC. It was my fifth time visiting that quaint little town, JoanMarie's second, and Isaiah's first. It was also his first time on a plane, and I was hoping he would enjoy his first flying experience. Thankfully, he loves words. All we had to do was pull out a book, and he was fine. In fact, any words would do! 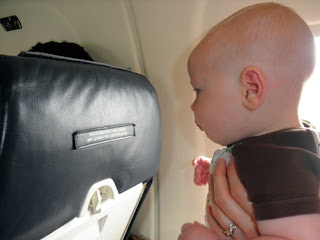 Our plane landed at 11:30pm, and I hoped to get straight to the hotel because I had a breakfast with some booksellers first thing in the morning. Then I noticed that a green (not purple!) suitcase was the only one left in the overhead bin. Even in NYC, the cab driver and hotel staff couldn't think of any clothing stores still open. And they wouldn't be open until after my 8am meeting. Thankfully, my breakfast-mates love a good "Guess what happened to my luggage" story. Immediately after the breakfast, with no time to shop, it was off to the Penguin offices. 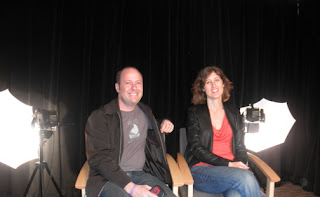 The main reason we went to NYC was so Carolyn Mackler and I could film videos talking about our upcoming novel, The Future of Us. Thankfully, Carolyn's husband and I wear the same size shirts, and he loaned me a few. But the ladies at Penguin thought the t-shirt I'd been wearing since I left California the previous morning worked best. Plus, the design happened to include a little joke from our book. (You can get your own Pluto R.I.P. shirt by clicking here.)

After Carolyn and I laughed our way through the video shoot, we headed to lunch with some of the amazing Penguin peeps who've been working so hard on our book since we turned it in last December. And we're excited to work with them even more...in the future! 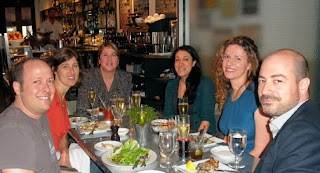 Me (in a t-shirt), Carolyn, Jen Loja, Jocelyn Davies, Elyse Marshall, Ben Schrank
The fun lunch conversation was interrupted by a phone call I had to answer. While I can't tell you what that phone call was about, I will tell you that I can't wait to tell you about it!

After lunch, JoanMarie and Isaiah met us back at the Penguin offices. Even though I write from home (or a coffee shop...or a donut shop), it felt like I was introducing them to my co-workers and friends. It was a wonderful meeting of my two worlds.

Then Isaiah experienced his first stroll through Times Square. And if you look over JoanMarie's hat, you'll see the white cowboy hat and tighty-whities of the Naked Cowboy. 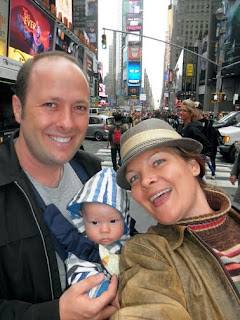 Because my Pluto shirt was getting a little too "well-worn", I bought a NYC t-shirt from the hotel (still no luggage), then train-hopped my way to Brooklyn to attend a bookstore event with my friend, and world traveller extraordinaire, Jodi Kendall. It was only a week ago that I discovered The Wilder Life: My adventures in the lost world of Little House on the Prairie. While researching its author, Wendy McClure, I noticed she was doing a signing my first night in New York. I love non-fiction books by authors who explore one specific topic and write about their amusing/hilarious journeys/discoveries. So I had to go! Now I'm determined to read more than just the first book in the Little House series. 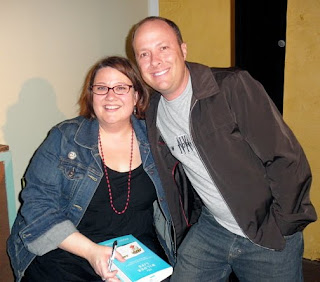 The next morning, my family went out to breakfast with my film agent, Sean Daily. I'd never met Sean before, though we've talked on the phone many times over the past couple years. Not only is he a great agent, but he's also a great guy. 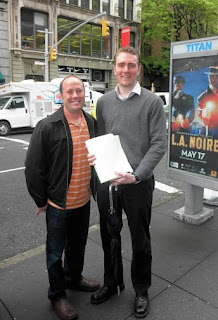 He's also a very tall guy. And as you'll notice in the above photo, I'm wearing something other than a t-shirt! That's because my luggage was finally delivered the night before (to the wrong hotel, but I don't want to get into that). I'm also wearing a very dorky smile, and that's because Sean's holding the Thirteen Reasons Why film contract, which was finally ready to sign!

Breakfast was followed by an interview at the Museum of Modern Art, which I can't wait to tell you about later (maybe next month?). Then the three of us jumped on the subway for Isaiah's first subway ride. 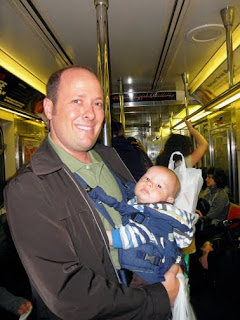 We exited the subway station and walked to Carolyn's house for dinner. In my five visits to NYC, it was the first time I'd eaten a meal somewhere other than a restaurant or hotel room. It was nice! And it was weird to think that our families, after all the time Carolyn and I worked on our book, had never met. But finally, we were all together. As we sat our children on the couch to take a picture, Carolyn made a very touching comment as we looked at the three boys. "They're the future of us." 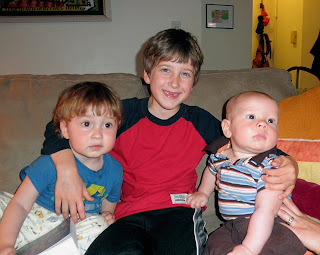 Yes, that comment sounds cheesy now, but it was very touching in the moment!

If you squint and tilt your head to the right, you can see the galley of our book in the lower-left corner. And if you happen to be attending BookExpo America this week, check your program to find out when Penguin will be giving copies away.

On Wednesday, I had a photoshoot for the interview I did the day before. And it was a full-on photoshoot with a make-up artist, lighting dudes, and everything! I brought my suitcase full of clothes with me so the photographer could choose whichever shirt he wanted me to wear. Mixed in with all my nice shirts was also my "well-worn" Pluto shirt.

Guess which one he chose. (Again, you can buy it for yourself by clicking here.)

Then we walked with one of JoanMarie's college friends, Tami Reichert, through Bryant Park. Even though NYC feels like it's all buildings, streets, and taxis, there are a lot of beautiful parks scattered throughout. 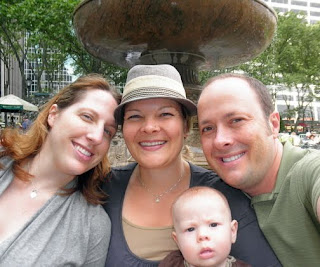 Yes, that's one of my favorite Isaiah "figuring out the world" expressions!

Tami helped us find Macaron Cafe, which is where we were meeting my friend (and editor of Thirteen Reasons Why) Kristen Pettit. The guy in this photo was making a really weird face, so I plopped a macaroon on his head. 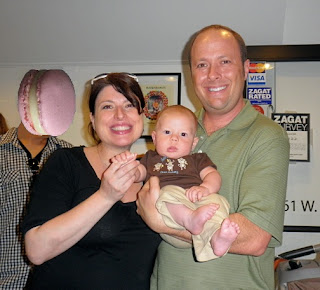 Tami and Kristen are both beautifully pregnant, so I will never eat a macaroon again without thinking of third-trimesters.

Finally, the morning we were set to fly back to California, there was one more thing to take care of. I met Carolyn and her agent, Jodi Reamer, in my hotel lobby and we walked to a restaurant to have coffee. There, we signed Jodi's galley of The Future of Us. 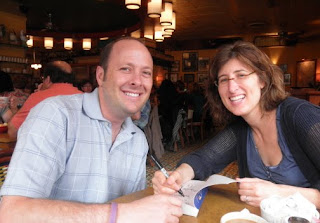 And then, we signed the contract for our book. Yes, it sounds odd to finally sign a contract for a book we've already edited and is now in galley-form. But that's what I love about this business. It's so wonderfully odd!

You met Wendy McClure! How cool is that! I just finished reading "The Wilder Life" not too long ago myself and got a real kick out of it.

Glad to see that you had fun in NYC in spite of the luggage debacle. Congrats on signing that film contract! Isaiah is looking adorable, as always. What a little cutie pie! :)

Sabrina, you should get to a book signing if you can. She's very entertaining!

Great post, Jay. Fun sharing a trip to NY with you and your family.

I went to NYC in half term :D It as amazing, apart from the fact that being from England, we had a little trouble trying to get our point across. Whoever thought that accents could act as a language barrier?!