(Before we get into this post, I invite you to check out the new 13RWproject website. Courtney Wood, the web designer, is a genius!)


Yes, I’m aware that today is not April 5, 2010. But I want to tell you about something exciting that happened on that date. I know you’re thinking, “Wasn’t April 5, 2010 when the White House Easter Egg Roll was attended by J.K. Rowling and Justin Bieber?” Yes. True. Good memory! But that’s also when I got an email from Carolyn Mackler saying she had a crazy idea to run by me.

She wanted to know if I’d be interested in writing a book with her!

Soon, Carolyn will tell you about what prompted that email (it’s a cool story!), but I thought you might be interested to know what my relationship with Carolyn looked like before I opened that email.

At the time, we’d only met once. It was at the 2005 Society of Children’s Book Writers & Illustrators conference in Los Angeles. I was a huge fan of Carolyn’s, but she had no idea who I was, and I was still several months away from finishing a manuscript called Baker's Dozen (turns out, Thirteen Reasons Why was a much better title). After she concluded her conference speech, I waited impatiently at the side of the stage for the other unpublished writers to finish pestering her with questions and gushing over how much they loved her. Finally, they all moved away and it was my turn! I told her how much her books meant to me, that I was in the middle of writing my first teen novel, and that the honesty in her stories was something I strived for. We had a nice conversation about Vegan Virgin Valentine, which was my favorite Carolyn Mackler book, and then I asked her to sign my copy of her Printz Honor winning novel. 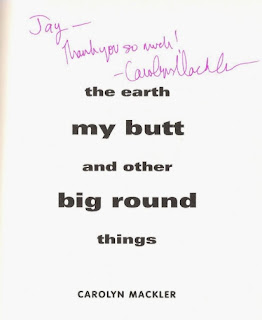 (In elementary school, I did a report on handwriting analysis. Notice the way her lowercase K and H look identical, and the way the second peak in her capital M is a loop? Carolyn is subconsciously wondering whether or not she should one day write a book with this nervous and awkward writer. Isn’t that weird?)

Fast forward a few years. I’m published, and now Carolyn’s a huge fan of mine. She’s never said that in those specific words, but this is my blog, so I feel okay putting words into her mouth (which is something we both got used to doing over the past year). Her next book, Tangled, was coming out and she wanted to know if I would read it and maybe offer a quote for the cover.

Here are two of the biggest honors I’ve felt as a writer:

A few months after Tangled came out (with my name in tiny letters on the cover), Carolyn asked if I wanted to write a book with her. In the time it took us to write and edit The Future of Us, which included hundreds of hours on the phone and thousands of emails exchanged, Carolyn and I became good friends.

This is such a cool business!
Posted by Jay Asher at 1:45 PM

I am curious: do your MCs dress like the My So Called Life kids? Because I'm thinking flannel could make a serious comeback ... or maybe not. :)

You already know I think this is so very cool! Too funny about stalking CM at the 2005 conference. I'm sure that was the same conference when I told her that as a teen reader Judy Blume was my idol, but as a writer for teens it was her. I also told her my favorite was VVV. :)

I cannot WAIT to read it!

Jess, there's not a lot of "clothes talk" in the book, so feel free to picture everyone in flannel.

Jolie, here's another thing that freaked me out during the writing of this book. Carolyn is a friend of Judy Blume's, and Ms. Blume was the first author Carolyn told about this project. And that means Judy Blume was having a discussion about...me!!! *faints*

Shifra, I can't WAIT for you to read it!

I always love hearing the “story behind the story,” and this one is most excellent! *said in my best Bill & Ted voice*

Yay for you and Carolyn teaming up to create something awesome. You’ve both spoiled us. Can’t wait to read it!

that's so awesome! I love hearing the back story about how books began..... and I love your handwriting interpretation, haha ;) Can't wait to read THE FUTURE OF US.

Hey Jay,
I was so very pleased when I heard you & Carolyn were teaming up on a project. May The Future of Us have a great run & do good things in teens' lives.
Charlie