You're so cute, yes you are!

We're going to have a baby!!!
Sorry, I'm just so excited that I couldn't string you along like I planned. Here's the proof I was going to show you at the end of this post...which is now at the beginning! 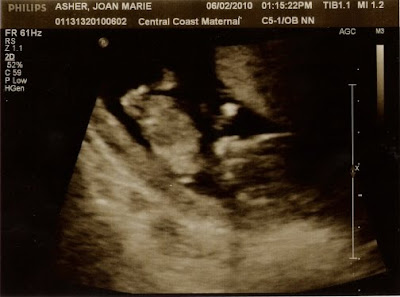 That's what the baby looks like as of this Wednesday, just over 12 weeks into the pregnancy (due date: December 13th). It's not the clearest ultrasound, but some scar tissue still remains from JoanMarie's surgery last November. Remember that? Yep, from surgery to pregnancy, my woman's a fighter!

Apparently, so is my baby. To get a better look, the doctor shook JoanMarie's belly (that was weird!), but my baby decided he/she was having none of that and turned to the side so we could only see his/her back. 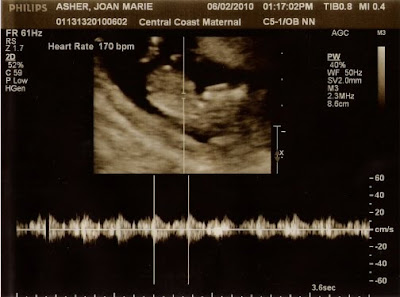 So here's where I originally planned on beginning this post. (But I was just so excited!) A few months ago, JoanMarie and I bought a new house. Why? Because we wanted a little more room. Room for what? Well, you know for what by now.

Here's JoanMarie, doing a very clumsy cartwheel through our living room the night the place became ours. 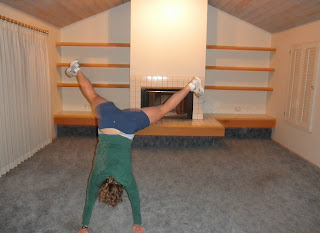 But my friend Ryan and I, minutes later, began ripping that blue carpet out. 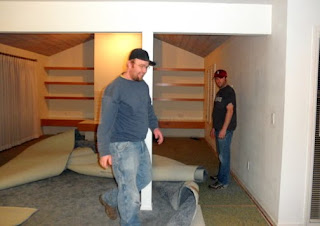 Within the next few days, we began taping and priming. 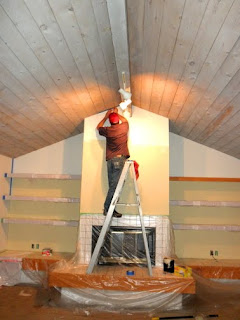 Then came the paint. 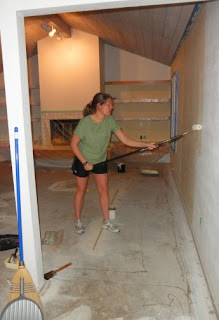 And here's the almost finished product! 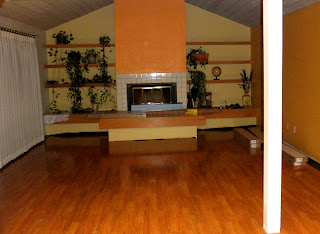 Not too much later, after returning from a speaking gig, JoanMarie picked me up from the airport a little late. Why was she late? Because she wasn't done setting up a scavenger hunt. Each clue led me to a new place in our house, where I discovered another clue...and a word. 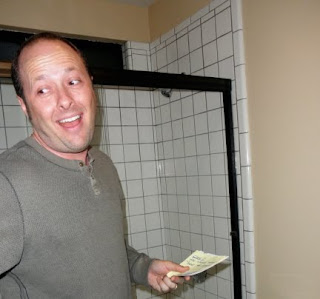 The last clue took me to our bedroom. Beneath the blankets on our bed was a basket with a bottle of sparkling grape juice, some Reese's Peanut Butter Cups (mmmmm!), and a pregnancy test with an extra blue line, plus one more word.

Our friend Brittany recorded the whole thing, and here we are watching my reaction. 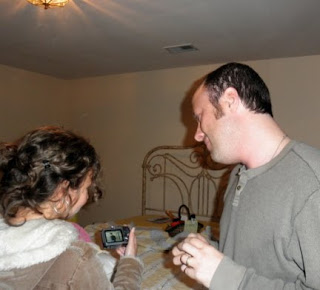 You may remember this photo, taken back in the fall of 2006, when I woke up my mom to let my parents know that I sold my first book. Obviously, it was an awesome night! But there was a slight glitch in the delivery of the news when my mom mistakenly thought, just for a moment, that she and my dad were going to be grandparents. 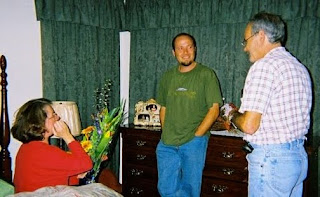 Well, this time, that's exactly what we were saying! JoanMarie and I are starting to learn songs to play to our baby while he/she is still in the womb. Just today, with me on guitar and JoanMarie on piano, we taught ourselves a lullaby version of Sweet Child O' Mine (sorry, Axl).

And I've already bought two onesies! Here they are, set atop a blanket with the theme of our new baby room. 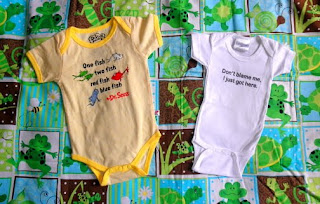 In case you can't read the one on the right, it says Don't blame me, I just got here.

Jay!! That is SO exciting! Congratulations to you and Joan Marie!!!! Awesome news! :-) And I LOVE your living room.

Jay, this was such a sweet post and a great way to start my day. Congratulations to you and your wife! Parenthood is the greatest thing EVER, truly.

That's awesome. Congrats to you both.

Congratulations! It's hard to keep the news quiet isn't it? It's an amazing experience. Very happy for your both!

The Many Thoughts of a Reader said...

congratulations!!! you both seem to be fun loving people!

Congrats Jay and Joan Marie! What an exciting time! Enjoy every minute!

Wow! Congratulations! What a creative way for Joan-Marie to deliver the news!

I love how you guys celebrate life, and now a new life! You are definitely good people. Congrats!

Awesome news! You two will be great parents. Congratulations!

Hooray! Congrats to both of you!!

So JOYOUS!!!!!!!! Love the house stuff and of course the BABY stuff... ooooooh so cute!
Your baby does have a great sense of humor and a spunky attitude!
Go Baby!

I can't wait to show JoanMarie all of your comments when she gets home from work today.

It's so nice to see the excitement for our li'l one coming from all parts of the country (we've even gone international!), because it shows that we'll have free babysitting when we travel!!!

YAY JAY - WOOOO HOOOOO! This is so exciting! Every baby and every pregnancy is special, but NOTHING compares to the first one... So amazing!

You totally made me laugh when you mentioned your mom thinking your first book announcement was a baby announcement... LOL! So cute!

CONGRATULATIONS to you both! I can't wait to see pix of your MINI ME!!!

Little Asher is always welcome to my home if you're ever in Reno. My son is even named Asher :) His name means happy, lucky, and blessed and he is!! So happy for you both and I loved all the pictures! Your house is so beautiful and you both did such an amazing job, I know the baby's going to enjoy those wood floors, especially because toys with wheels go mighty fast on them :) Big Congrats!!!

Congrats to you both!!! Amazing post about this awesome time in your life. Thanks for sharing!!!

Here's to an easy pregnancy and an even easier birth! Parenting isn't easy so good luck with that part! ;) j/k it's even fun sometimes o.O

AWWW Congrats! I'm so happy for you. I feel like it would be cool to have you as a dad. Plus, when you're president, you'll just be that much cooler of a dad. =]

Aww....Congratulations! You're both in for such a wonder-full ride! Ummm...this doesn't mean you'll be switching to picture books does it? LOL.

Congratulations! That is such exciting news!

Yay!!! What fantastic news! Congratulations to you and JoanMarie!

Awww, Congrats Jay! My little one came December 12, 2003 and well, I know exactly how you feel!

Congratulations, Jay! No accomplishment in my life has ever been as profound as bringing my children into the world and watching them grow into the incredible human beings they are.

WoooooooHooooooo! Congratulations Jay! There is nothing like it in the world. Enjoy every wonderful poopy minute! Cause there will be lots!

Hi.
I am in a computer class and we are learning to write letters. We recently have a project to write to our favorite author. Although I have searched do you mind posting your address? I really would like to write the letter to you because you wrote my favorite book! !3 reasons why! Thanks in advance