A Quick Trip to Kansas

Last week, while in Texas, I got a frantic phone call asking if I could make a last minute trip to Kansas. Another author had been scheduled to speak at Ottawa High School, as well as at an awards banquet for student writers, but she unexpectedly canceled. Kansas was in a bind. Kansas needed help!

It's not often that I get a chance to feel like a superhero coming to the rescue, so I take that opportunity whenever it comes. To help you imagine how I answered that call, picture me standing tall, hands on my hips, puffing out my chest, looking off into the distance, and saying in a deep voice, "Have no fear, I'll be there!"

So I flew home to California, kissed my wife hello, then gave her another kiss goodbye, and flew to Kansas.

(To be honest, I got motion sickness and almost barfed fifteen minutes into my first flight, but to tell you anymore about that would totally ruin the superhero image...)

Even though some students were still expecting the other author (surprise!!!), we had a great time. I spoke to three different groups of students in the library. 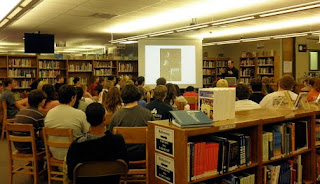 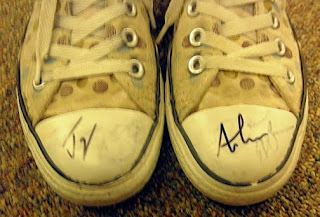 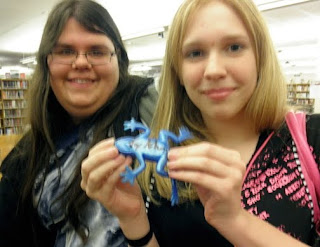 I also signed a very cool Thirteen Reasons Why poster a girl made for a report, and I'm now kicking myself for forgetting to take a photo of it. Have you ever been kicked by a superhero? It hurts! (But I deserved it.)

I also had a delicious lunch with faculty members and the people responsible for getting me here. And no, the faculty doesn't always dine with linen and shrubbery. 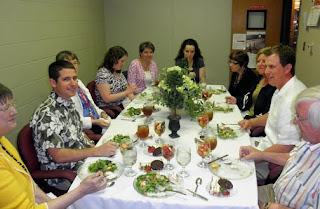 At the awards banquet for student writers, I gave a "motivational speech" to a group of students who are currently writing at a level leaps and bounds beyond my own writing at their age. I have no doubt that some of them will be very successful when they eventually get published.

So what will I be leaving Kansas with (besides an inferiority complex after hearing those poems and essays)? I'm leaving with this... 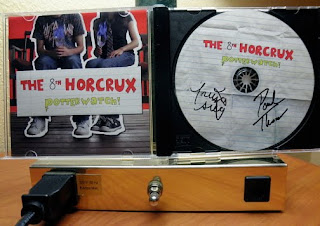 (I'm leaving with the c.d., not the base of the lamp it's resting on.)
The 8th Horcrux is a c.d. of twelve Harry Potter-themed song parodies written and performed by Paul Thomas and Trina Sieg. "Ginny, Are You OK?" is a parody of "Smooth Criminal" by Michael Jackson. "Witch" is a parody of "Bitch" by Meredith Brooks. And "Potions Wizard" is a parody of...you guessed it..."Pinball Wizard" by The Who. I even got Paul and Trina to sign my copy!!!

You flew to Kansas? You should have just clicked your heels!

You don't think I tried that???

kansas and harry potter??? these are the things i dream about at night! except you arent there. sorry.

Probably not the best place to post this but i read your book on Thursday night found it in target of all places and i didn't sleep that night,not a wink i loved it!

WHOA you actually replied to a comment that's sooo cool I read all your blog posts but I didn't think you would reply to comments! I LOVE your book and I'm an (aspiring,im only 14,) author too! If you have extra time and feel like it, I would really appreciate it if you looked at my blog (www.siennastories.blogspot.com) and left feedback! I'm working on multiple novels, and getting your opinion on ANYTHING would be lik a dream come true! I love your writing! :)

Btw, you don't have to look...I was just really shocked that you replied to a comment, most writers don't do that!

It should be: "Yep, Kansas wrocks. Literally." And ya, it does :D (as do paul and trina) by the way, it was awesome to see you at our school!!

I don't think Hannah backer is a good character.
She gives other peaple the fault that she had killed herself. You can't give the fault for what you did to other peaple.
But I loved the book. Even if I don't understand the character of Hannah Backer it realy made me think about what taking about peaple can do to them.

Of course Hannah Baker isn't perfect. That's the point. Have you ever met someone who doesn't blame others for their problems? If she didn't blame others, she'd almost be a Mary Sue character. The inherent flaws in Hannah's character make her all the more realistic. Good book! :)