Thirteen Reasons Why recently won South Carolina's Young Adult Book Award. State awards like this one, voted on by teens, are my absolute favorite awards to receive. 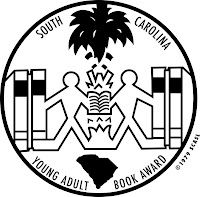 So here's the current tally: South Carolina holds 8 electoral college votes. Thirteen Reasons Why previously won teen book awards in Florida, Kansas, Kentucky, and New Jersey (27, 6, 8, and 15 votes). In 2012, I'll finally be old enough to run for President. If I can keep the teens in that state on my side for a couple more years, and since many of them will be able to cast their first votes by then, I could potentially have a chance at 64 electoral votes...needing only another 206 to win.

Thank you, South Carolina!!!
Anyone want to be my running mate?
Posted by Jay Asher at 12:01 AM

I would sun run with you!

Except I'm not American? Would that be a problem?

i would SO be your running mate... if i was anywhere near old enough. can it wait 30 years?

Congrats! BTW, Peepy said you could be her running mate.

Congrats to you Jay. Very deserving.