Back At It: YORBA LINDA

Last week I spoke at the Yorba Linda Public Library. It was my first author talk since before Thanksgiving, so my nerves were hitting hard. But I knew it was friendly territory because Amy, the teen librarian who set this up, used to work at the San Luis Obispo Public Library. And that's where I used to work!

I love seeing book displays at libraries and bookstores based around topics. Or, if there's an author visit, a display of books that touch on similar themes.

I gave my first author talk eight-and-a-half years ago, so it's rare to see something done for the very first time. But at this library, they labeled the refreshment stations after places in Thirteen Reasons Why! The coffee table became Monet's Garden... 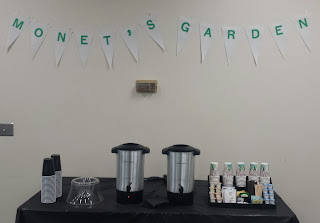 ...and if you wanted a root beer float, you went to Rosie's Diner. 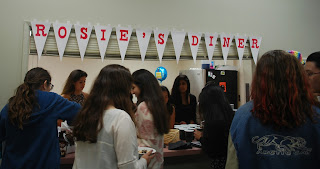 The audience was great, which isn't unusual...thankfully! 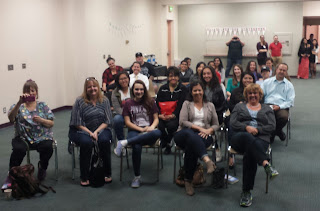 But I was especially grateful to have such a good audience for this visit. This was my first talk where I was able to mention two exciting career developments. As you can see by the screen behind me, I can now talk about three books: Thirteen Reasons Why, The Future of Us, and What Light, which comes out this October! 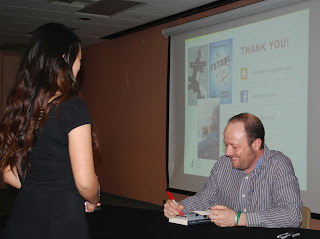 It takes a long time for me to figure out the best way to describe a book, so this was my test audience for What Light. And I totally messed it up! But like I said, I was happy they were a great audience.

Here are members of the library's book group, as well as Amy on the far left.

The second development I was finally able to discuss publicly was the upcoming Thirteen Reasons Why Netflix series. The lucky audience in Yorba Linda also had the chance to meet, get pictures with, and speak to some of its producers and writers, who came out from Los Angeles to attend the event. 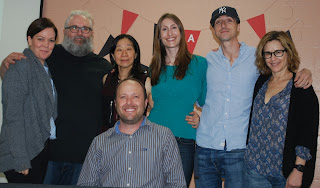 Maybe the next time I speak I'll have even more news to share!
Posted by Jay Asher at 1:48 PM

Wow. A Netflix series. Congratulations! I look forward to watching it.