When a librarian picks you up at the airport in a convertible Mustang with the top down, you know it's going to be a good visit. 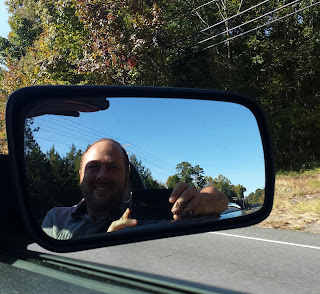 When you get to the school (in this case, Marvin Ridge High School in Waxhaw, NC) and the cafeteria is covered with posters saying YOU MATTER and PAUSE; PLAY, and those posters are covered in affirming statements, you know it's going to be a very good visit. 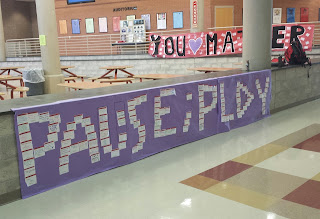 During a dinner with faculty, I was given insight into the many things they've done with Thirteen Reasons Why leading up to my visit, from classroom readings and analysis to community discussions on the issues in my book. That night, I spoke to mostly adults in the school's auditorium.

Back at school the next day, I gave a writing workshop to two groups of students who were selected to participate based on essays they'd written.

In that first group was the fourth student I've met named Hannah Baker, the main female character in 13RW. 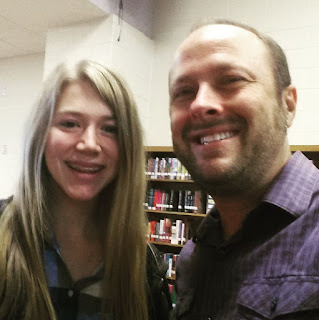 Then it was off to the auditorium with my coffee to set up for the first of two presentations. 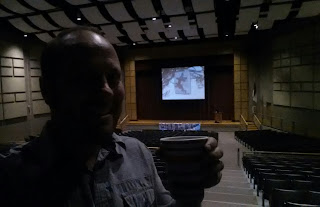 The sign on the stage was made up of even more positive statements
and spelled out MAVERICKS. It was supposed to say
MAVERICKS MATTER, but they ran out of time.

I spoke to the entire school over those two presentations. Both groups had great questions. Some questions were actually more personal comments, often greeted with applause by the other students for their openness. 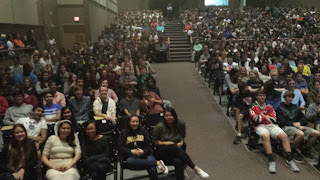 I heard about that type of openness happening in classrooms as students shared reactions to the characters and issues in my book. Some of those discussions included tears, often by the students listening to other students speak. One of the best statements I've heard in my eight years of doing this was when one teacher apologized to another for not being more encouraging about the school-wide activities inspired by my book. Understandably, he was nervous about how the subject matter would be handled and taken. But after seeing the reactions of the students, and how they participated in my visit, after decades of teaching, this was his favorite day.

Openness and empathy are so powerful.

Then I spoke to the second group of essay winners.

This was another visit that required me to sit in my hotel room for a while after, and then take a long walk outside, to let myself fully appreciate what these amazing students and teachers shared with me during my short time with them.
Posted by Jay Asher at 10:42 PM