The forty-first stop on my 50 States Against Bullying campaign is one I'll have to come back to visit just for fun. Or relaxation. Or, more than likely, relaxing fun! Descending into Vermont was where the beauty started, even though it only involved a couple of colors.

Walking through the airport, I couldn't help comparing what I saw to my stereotype before ever setting foot here. For example, the chairs available to watch planes land and take off made me think, "That's so Vermont!" 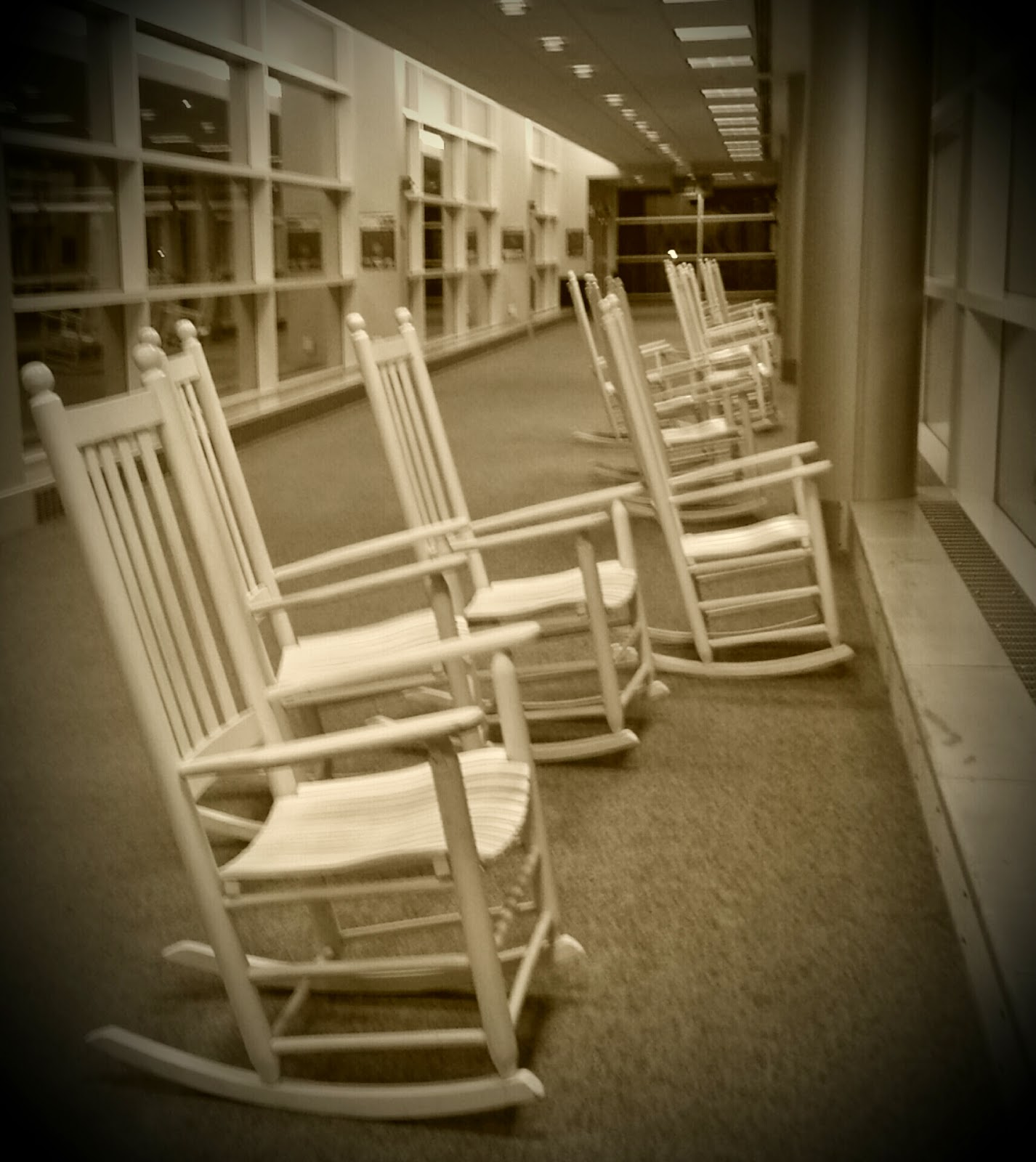 Where did my stereotype of the Green Mountain State come from? From watching and loving this show in the 80s. 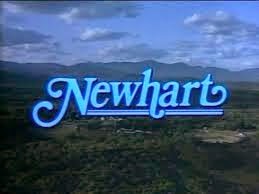 Even though the show about the inn run by Dick and Joanna was filmed in a studio, it was supposed to be set in Vermont, and the outside establishing shots of the inn were from a real Vermont inn. Even though it required driving an hour through snow to get there, I had to go there! 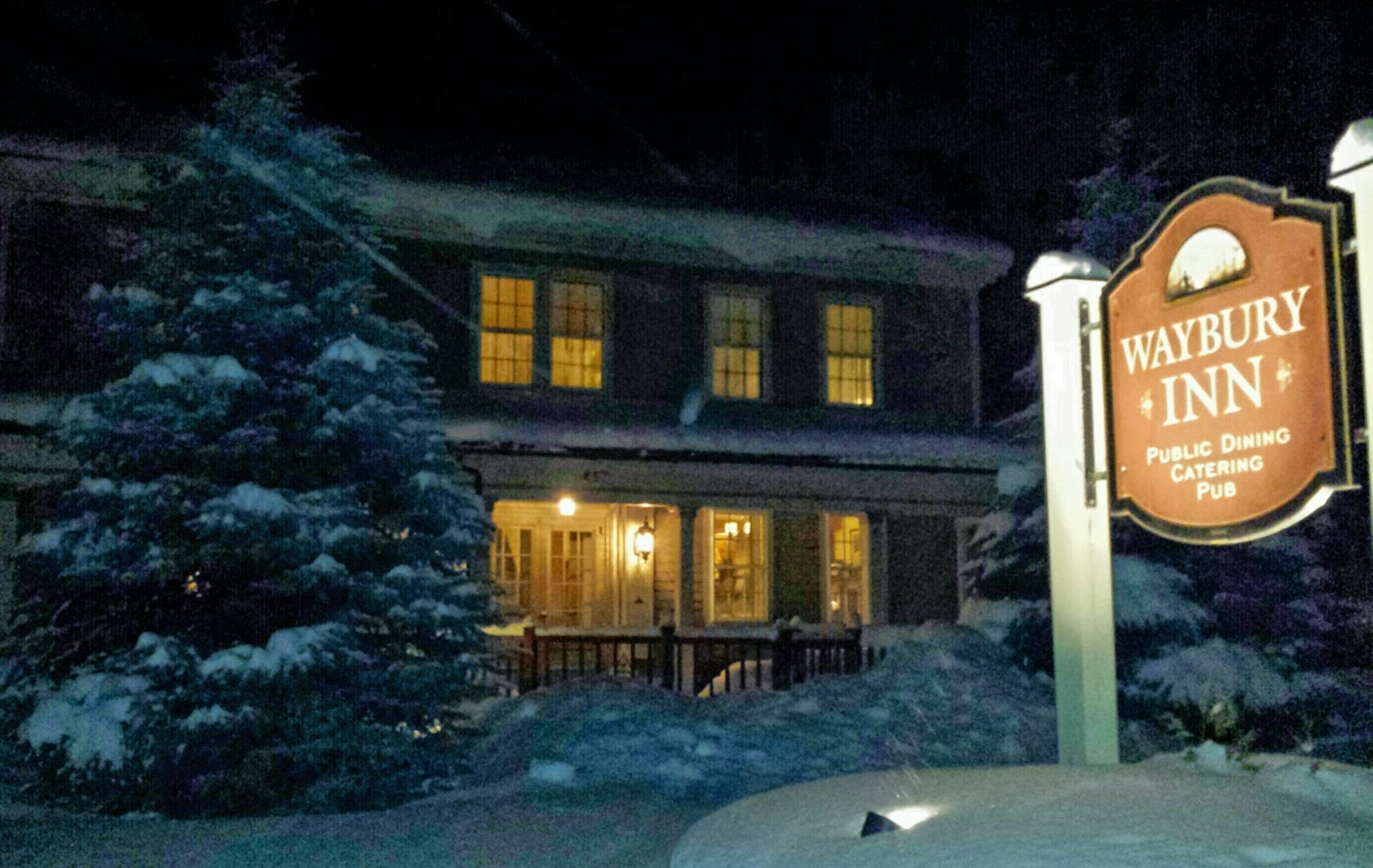 Yep, this was the place. 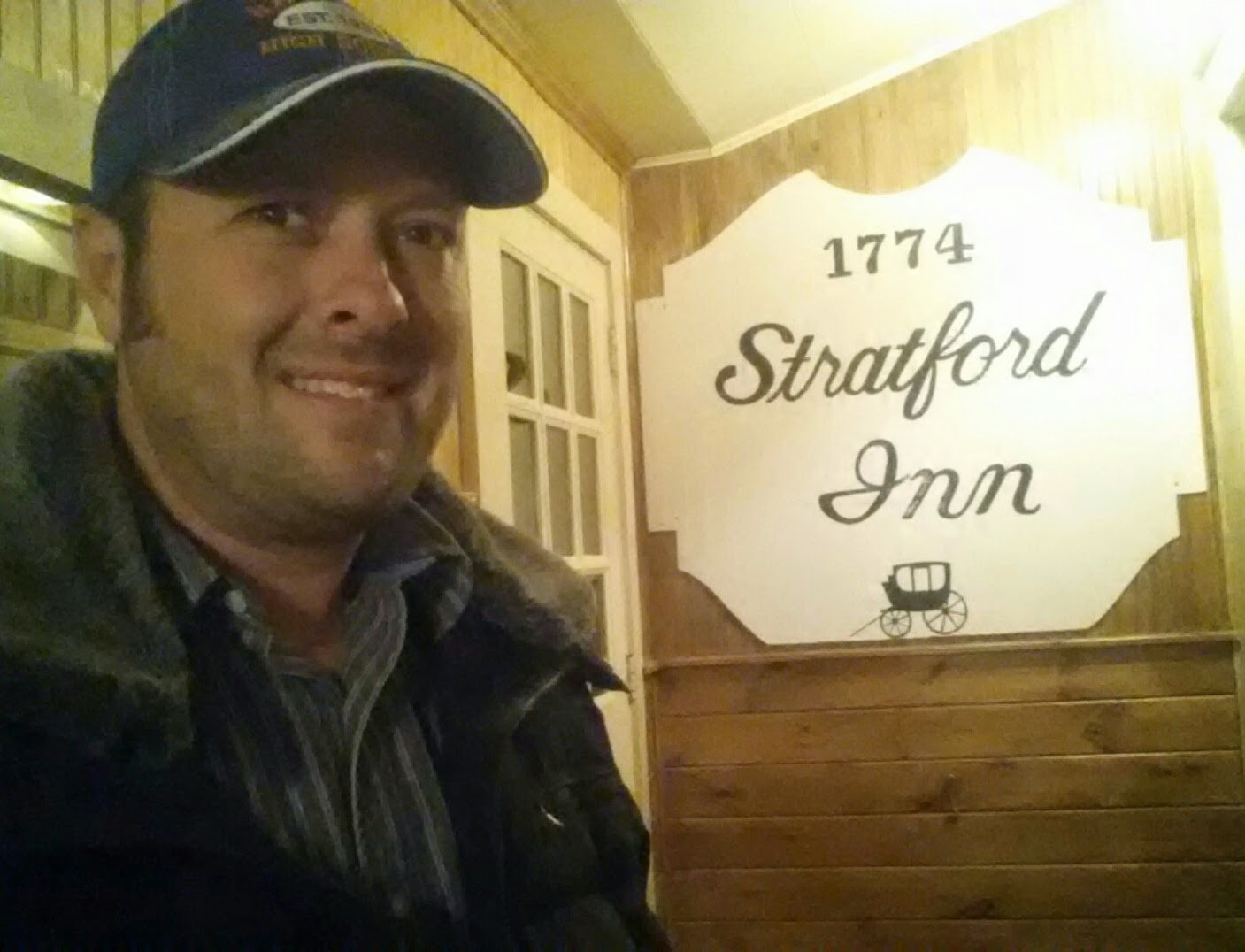 I drove an hour back to Burlington, and my tummy was growling, so I grabbed some yummy spaghetti and walked around (briskly!) in the negative-degree weather. It was so beautiful, even late at night, I couldn't just sit in a hotel and stare at generic hotel walls. 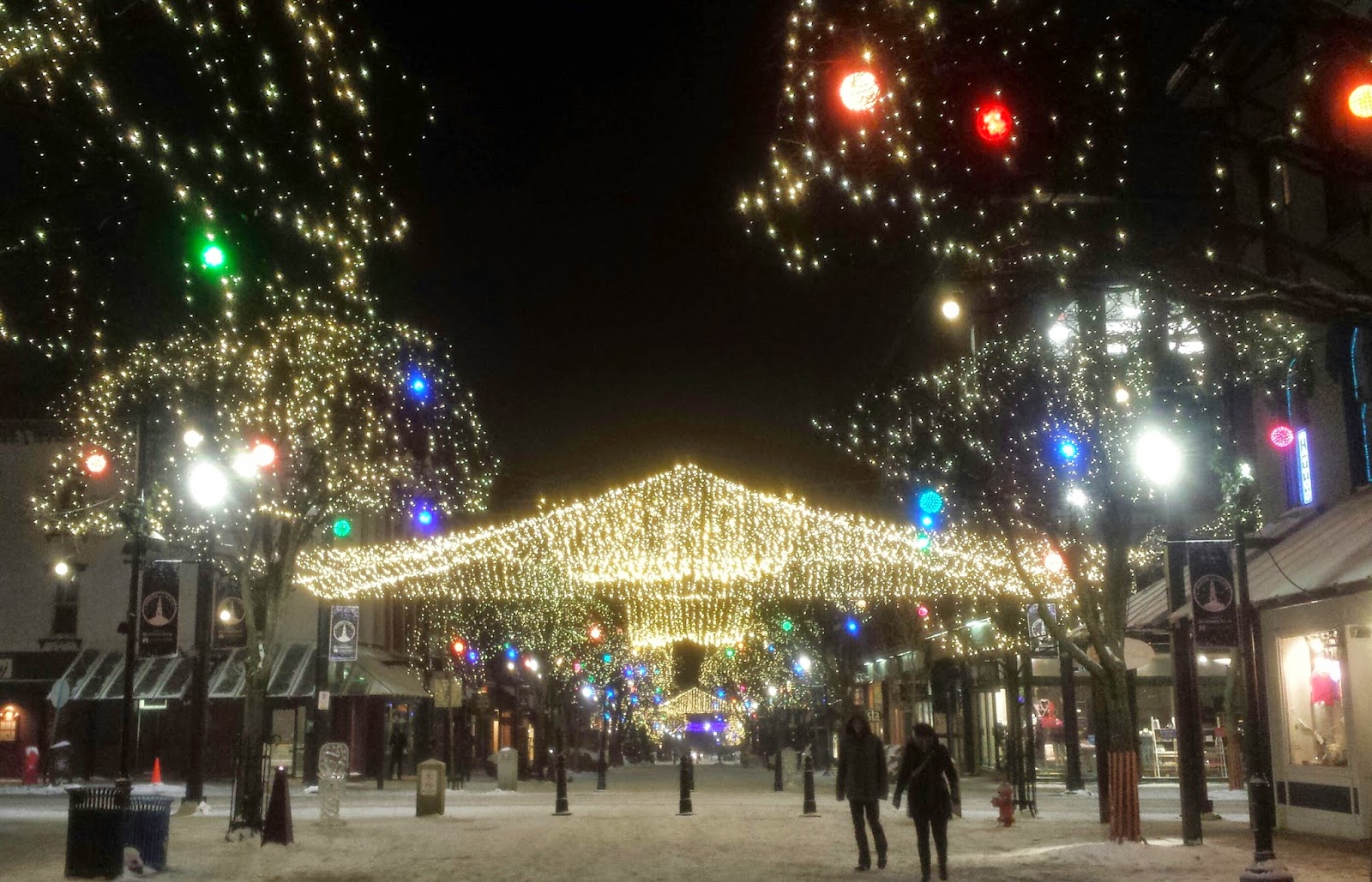 This is an ice sculpture, of which there were many around downtown. This one, if you lick it, actually has a hint of chocolate. I don't know if people are supposed to lick it, but how often do you have the chance to lick a Lake Champlain Chocolates ice sculpture? 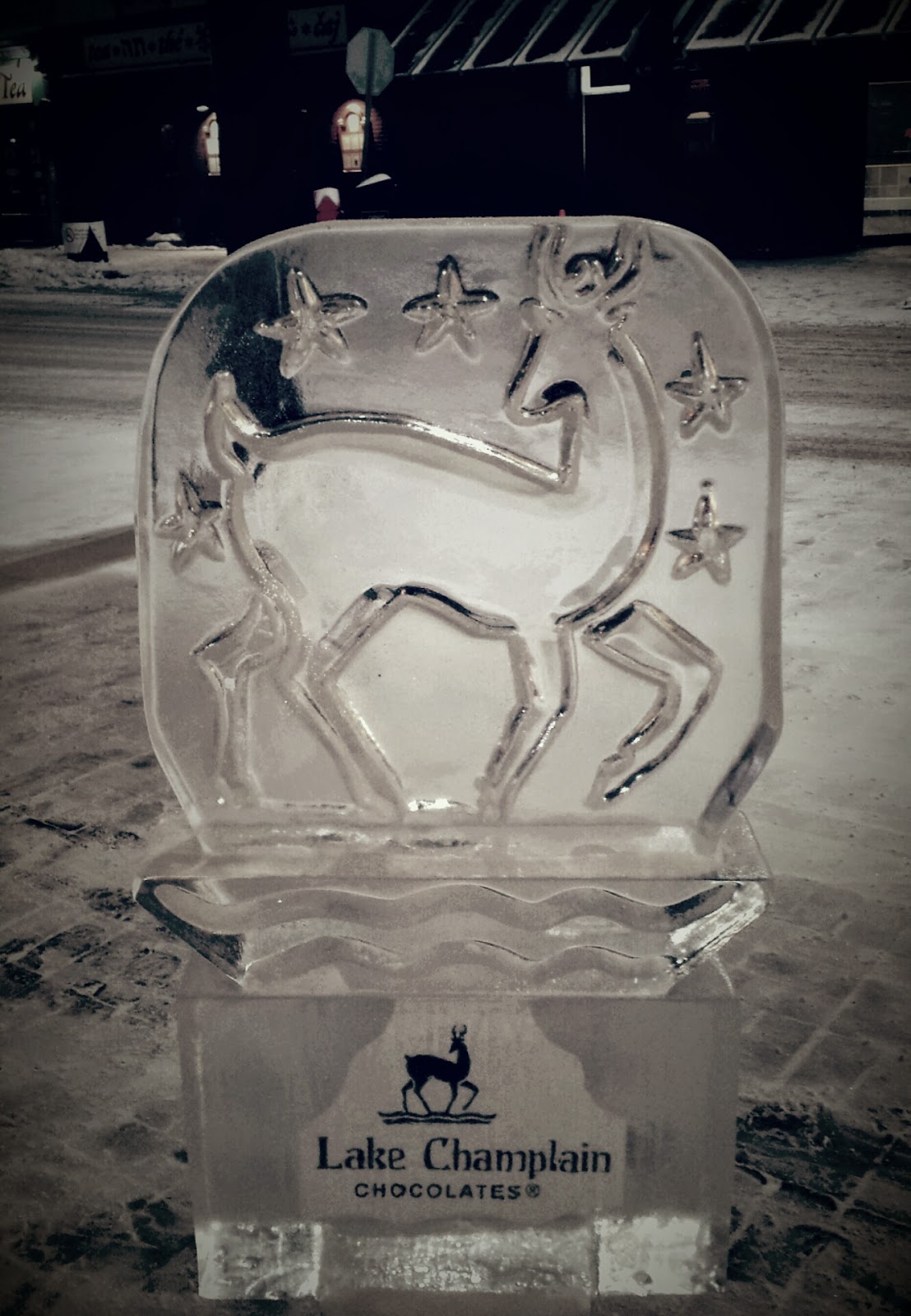 No, I didn't really lick it. That would be too weird even for me. But seriously, that would be cool if they mixed a little chocolate into the ice.

This is the second time the people who stayed in a hotel room before me were so frickin' hilarious that they set the alarm for some random middle of the night time.

That tweaked my sleep just enough that I woke up five minutes before I was supposed to leave for Burlington High School. Luckily, my hair takes about as long to sculpt as it took you to read that first "Ha" above.

Upon entering the auditorium were filled out #ReasonsWhyYouMatter notecards, wristbands, and books. Three of my favorite things! 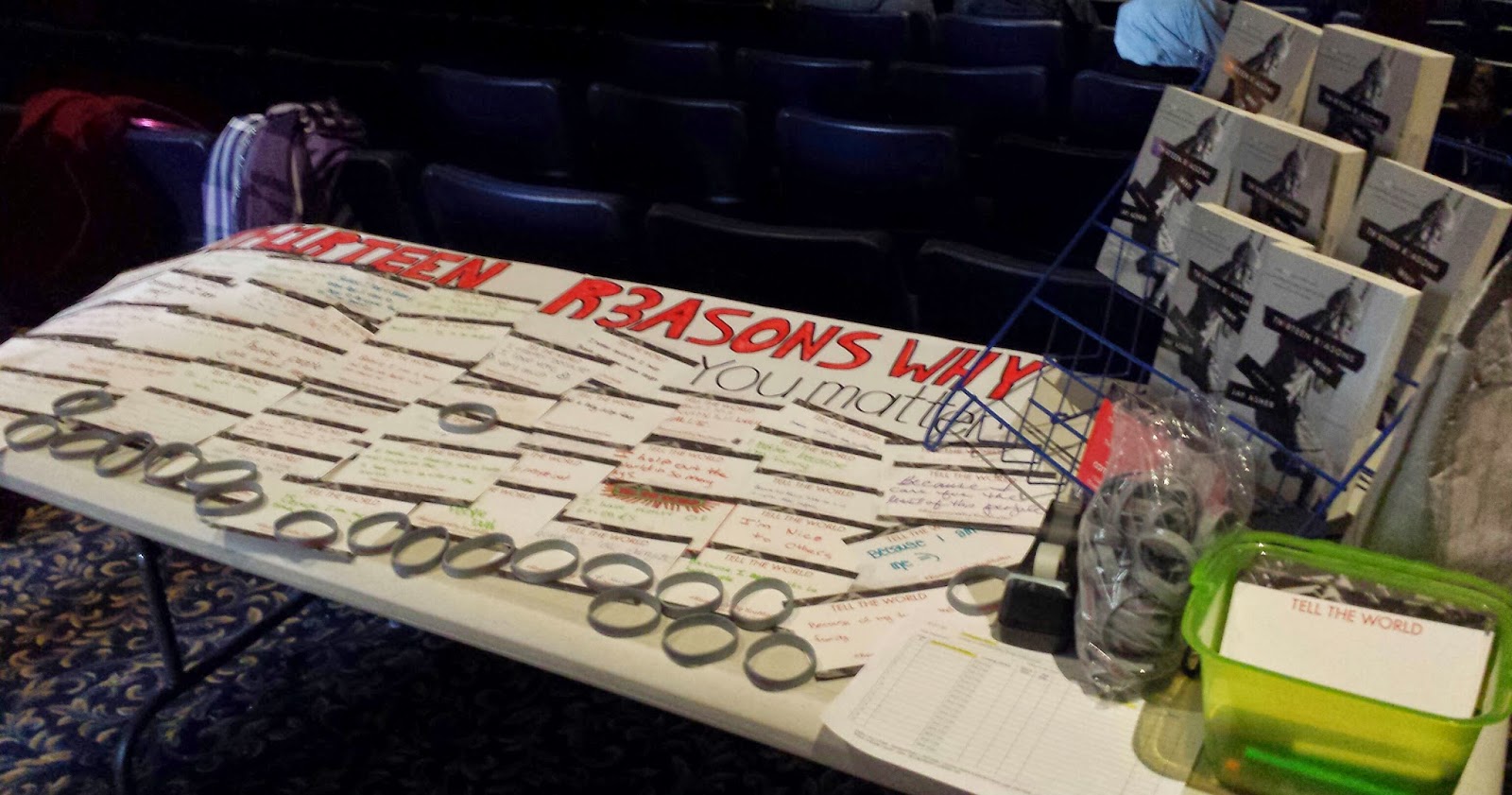 Then, a great introduction by a student... 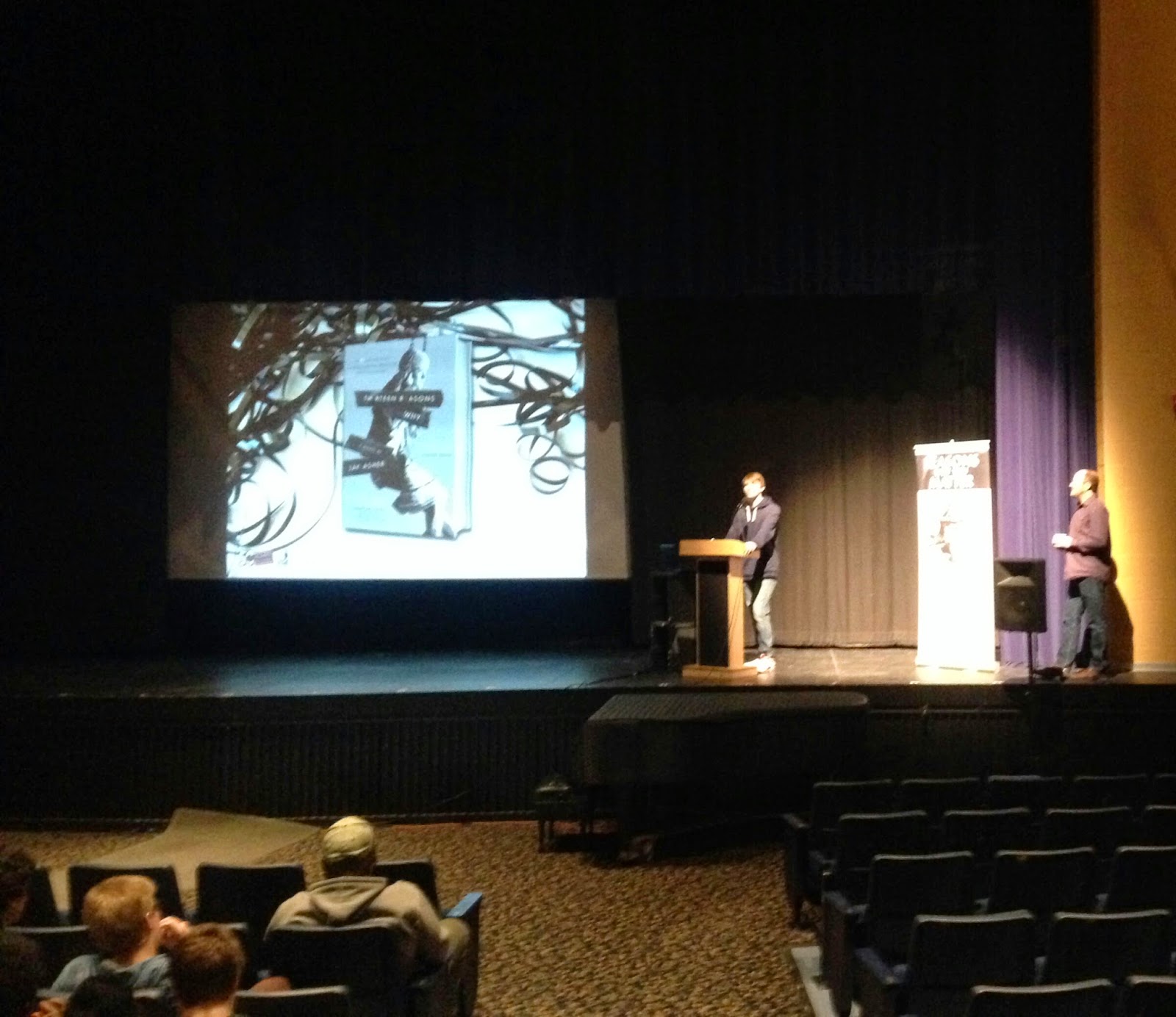 ...and it was my turn to speak to these beautiful people!

I loved all of the positive and thought provoking messages throughout this school.

And the flags hanging in the cafeteria depicted all of the nationalities represented by the students. It's a wonderful thing to see a school recognizing and celebrating its diversity. 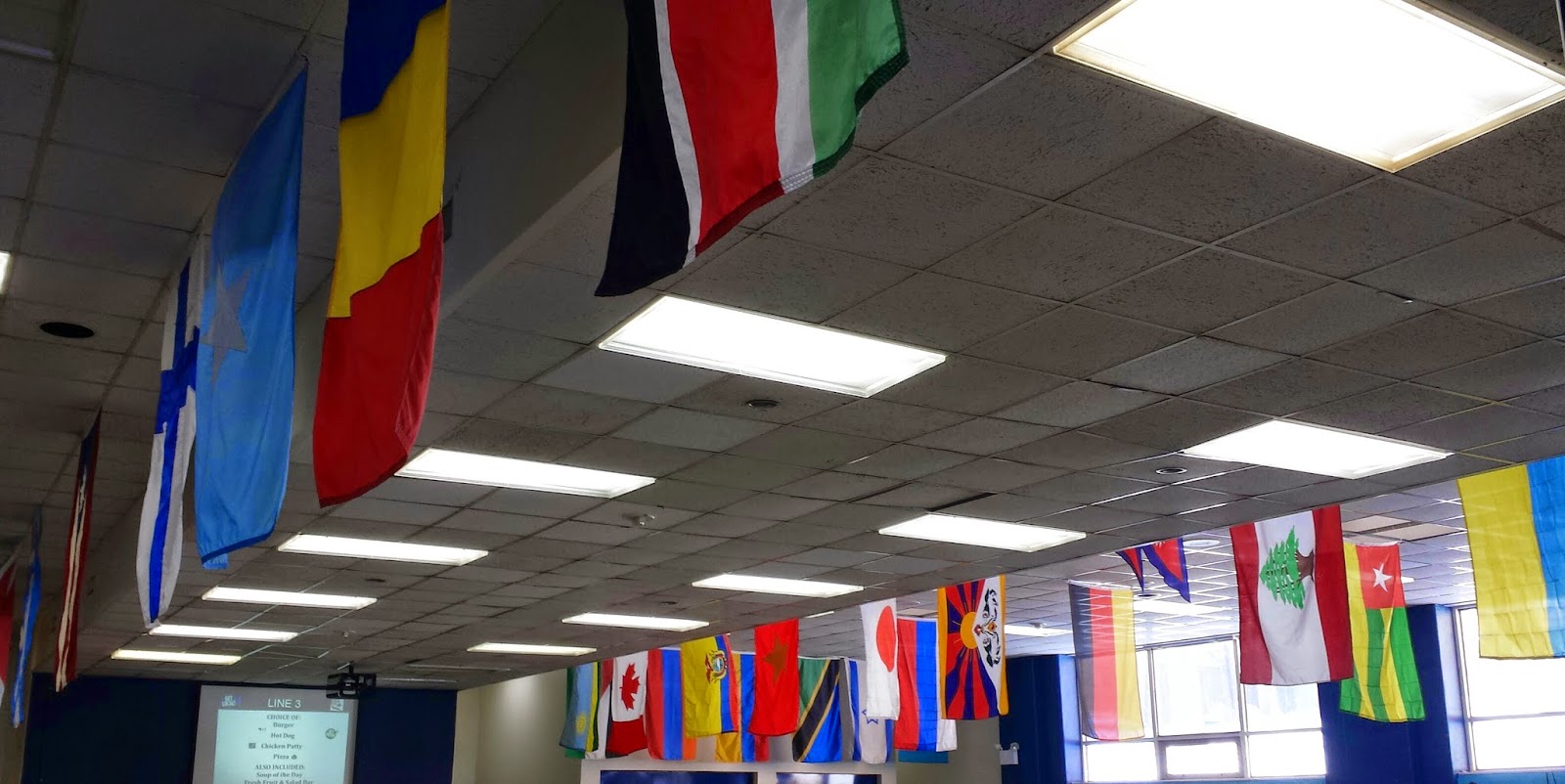 What didn't I see in Vermont this time? Colored leaves on trees. The Ben and Jerry's factory. The Vermont Teddy Bear factory. The Rokeby Museum of the Underground Railroad. The Christmas Loft. And so many maple-making and cheese-making tours...with samples! 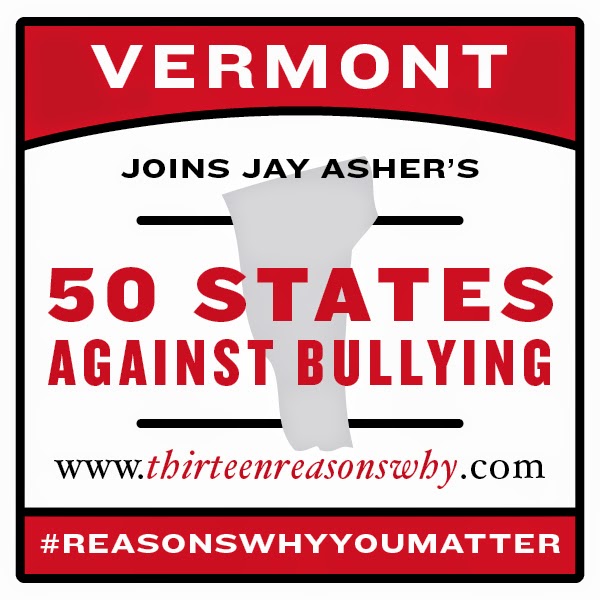 Hi Jay, I am chair of the PA of a K-12 special ed. school in NYC, the Child School/Legacy High School. It is a publicly-approved special ed. in NYC, state-funded and chartered, and our students come from every borough of NYC. Bullying has been a hard issue to deal with at the school, because some children have emotional issues and poor filters on what they say, so that the school has to take into account their IEPS in terms of executing suspension policies. All of the parents really want to work together to create a strong anti-bullying climate, but it's very hard in a school where children's disabilities vary so widely. Basically, it is a high-functioning population of children. I would really like you to visit our school. We have three divisions--a high school, a middle school, and an elementary. How do I contact you about an appearance?

Wow. Just wow. I just finished reading Thirteen Reasons Why and my head is filled with so many ponderings. Being from Vermont, I thought this would be a good place to leave my comments for you. First off, I am not your typical YA reader. I am a 36 year old homeschooling mom to three. A friend (in her mid-20s) recommended your book to me last year. I added it to my extensive "to read" list on GoodReads but a few weeks ago I wandered into my local library looking for some books. I just grabbed a few off the shelf, and I immediately remembered your title as it sat in my hand. As I sat the book down on my bed, after only reading three pages, my 12 year old son grabbed the book and said "this looks good" and took off with it. He got about a third of the way through it (within the day) and left it within my reach so I stole it back and plowed through (so now he can finish it, lol). This book really rattled me! No one person felt they did anything bad enough to cause Hannah to feel the way she did, but the cumulative effect was detrimental. This is so often the case in our schools and in society in general. When you're not sticking up for someone, you're effectively fighting against them. I am so very thankful for being able to provide my children with the opportunity not to have to deal with bullying in school, but it still happens on the soccer field, at the playground, and anywhere that self-focused people congregate (we are all self-focused). We, as a society, need to focus more on how our behaviors will effect others rather than how we feel and where we are headed. We need to slow down and get to know people, and give them the opportunity to open up if they need to. You never know when you'll be that one person who makes them feel life may, in fact, still be worth living.

Enough of my ramblings (sorry, it's still so new in my head that it's all just bouncing around). I encourage you to definitely come back to Vermont. When it's not below zero. It actually is pretty nice here a few months of the year ;) When you do, please let me know. I've love to meet you . . . maybe have you speak with some of our homeschoolers in the area (there are a LOT of us!), and possibly hook you up with some schools in our area that have a lot of bullying issues that no one seems to be able to get under control. We are about 20 minutes away from the Ben & Jerry's plant, Cold Hollow Cider, Cabot Cheese, any many more must-see attractions. My kids and I would be more than happy to be your personal tour guide.

Thank you for your book. I will be suggesting it to many people, young and old. I hope to see more from you in the future!

Once I left Vermont, I knew I'd have to come back with more time to explore!