El A and El Paso

This past week, I did a booksigning in Los Angeles, and a school visit in El Paso.

In L.A., I spoke at a Barnes & Noble where I've always wanted to do an event. Why? Because it's in the middle of a cool shopping district called The Grove, and because they make really cool banners to promote their events. 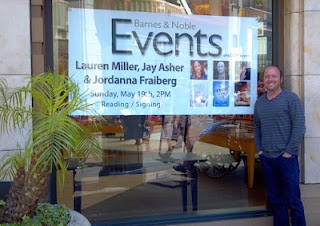 I was one of three YA authors at this event. One of the authors was my friend, and fellow Razorbillian, Jordanna Fraiberg. The other author was Jordanna's friend, and my new friend, Lauren Miller. 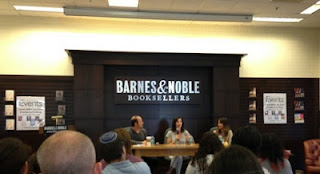 After discussing our books (which you should all run out and buy), and before the Q&A, we held three contests so audience members could win prizes. The first contest had them line us up by how old we were when we had our first kisses. One of us was young, one was a late bloomer, and one was just right (not that you should judge the first two). It took two tries before we had a winner in that contest. Then we had them guess which author went to Harvard, which went to Yale, and which dropped out of college. Someone won that on the first try (and I'm going to assume that was a lucky guess). Finally, we told them that, as children, all of us used to dress up in costumes and go out in public even when it wasn't Halloween. One of us went to school dressed as a bellydancer, one went shopping wearing an old lady wig, and one went to the mall dressed as Wonder Woman. That question really stumped the audience.

Other authors who came out to hear us, which made us very happy, were Jennifer Bosworth, Aaron Hartzler, Alexandra Monir, and Greg Pincus. And yes, you should definitely buy all of their books, too (or pre-order it if it's not out yet).

A few days later, I flew to Texas. Right before my visit, I found out that my great grandfather lived in El Paso in the late 1970s. I also found out where he liked to eat, which was a total greasy spoon diner. When the librarian who organized the event (Hey, Gloria!) picked me up at the airport and asked if I was hungry, I said, "Have you ever heard of Elmer's Family Restaurant?" 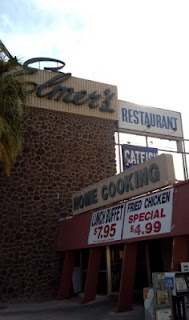 Yes, the place looks very similar to how it probably did in the '70s. But the food was good!

The next day, I gave four presentations in the library of Burges High School. Almost all of the students had read both of my books, which always makes an event more fun, and also makes the Q&A more engaging. 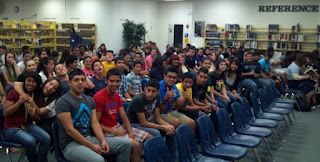 That evening, I had dinner with several students and faculty at a great restaurant called The Garden. With more chances to interact with the students, we had some wonderful literary discussions. And the artwork around us helped set the tone. 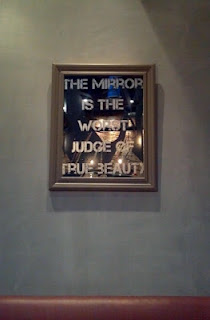 So what happened to the banner from Barnes & Noble? While I was all prepared to arm wrestle or do a spelling bee or have a watermelon seed spitting contest, Jordanna and Lauren basically said, "You can have it." 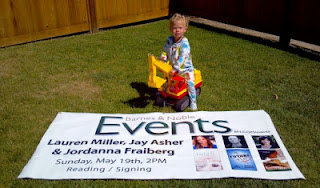 Isaiah and I are thinking Slip-n-Slide!
Posted by Jay Asher at 6:26 PM