When I travel, I rarely get a chance to check out the town I'm visiting. But in Rochester, NY, between two book signings and a speech at the New York Library Association (NYLA) conference, I snuck away to three museums!

The first, the Strong National Museum of Play, is one of the most fun museums I've ever been to. They have so many unique areas, but I spent most of my time browsing the exhibit on the history of toys. This first pic is of The Landlord's Game, which eventually morphed into Monopoly. 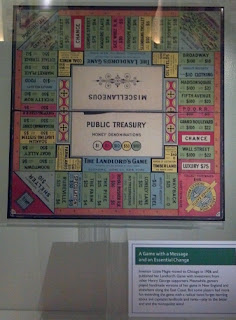 They had a Commodore 64, which was the first computer my family owned. And yes, the keyboard in this pic was the entire thing. You plugged it into your TV, and off you (slooooooowly...) went! 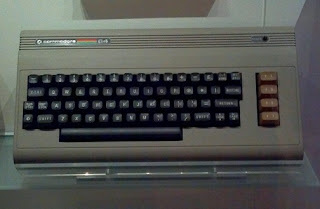 I also played the original versions of some of the first video games, including Pac-Man. Look at these cutting edge graphics! 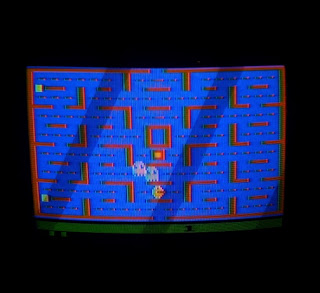 When I saw their Teddy Ruxpin (which I never owned), a great/twisted idea hit me. 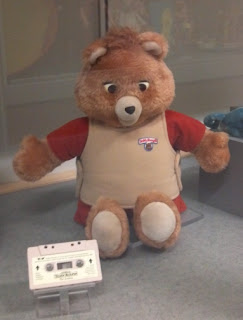 In Thirteen Reasons Why, Clay has to figure out how to play Hannah's cassette tapes so he can listen to them away from home. What if Clay, instead of what happens in the book, goes into his attic and finds his dad's old Teddy Ruxpin?

Imagine him holding that bear close to his ear, riding a city bus, as Teddy's mouth moved, saying things like "There was just something about you that made me need to be your girlfriend."

Someone please film that book trailer!

After the Museum of Play, I went to the house where Susan B. Anthony lived. On the guided tour, it was almost overwhelming to imagine the history-making conversations and events that happened right where I stood. 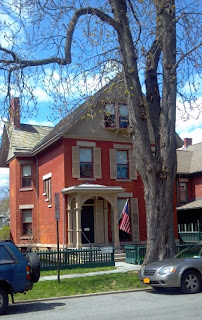 That tree pictured above was growing there when Ms. Anthony lived in that house. The stones making up the sidewalk were the actual stones she walked on. I love that the city preserved that section of the sidewalk!

That night, I got to hear Jacqueline Woodson (another very inspiring woman) accept the Knickerbocker Award for Juvenile Literature. 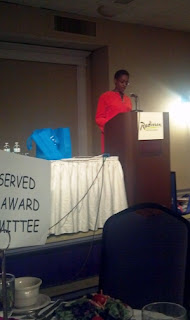 The next morning, I gave a presentation as this crowd of librarians ate breakfast. 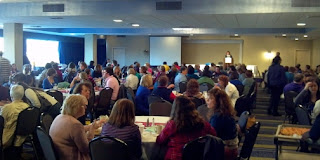 Maybe it was the "breakfast pizza" (topped with scrambled eggs!) that put them in such a good mood, but they laughed so easily that even I laughed a few times. And I'm usually good at keeping a straight face during presentations.

After my talk, Svetlana Chmakova and I were taken on a tour of the Eastman House, owned by the man who built the Eastman Kodak Company. 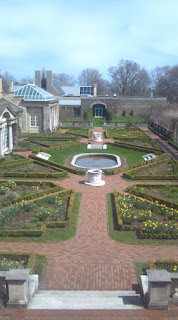 Especially while viewing his massive library of (non-digital) books, I felt guilty taking (digital) photographs on my phone. I wouldn't blame the museum if they only allowed tourists to use cameras that required Kodak film! 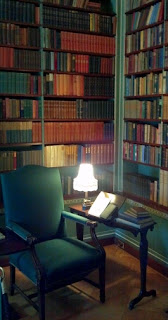 I returned to the conference to hear Dan Gutman give the closing keynote. This dude absolutely cracks me up! 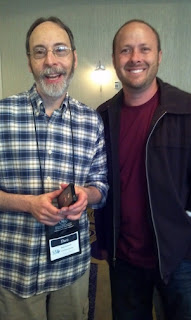 Thanks for a great visit, NYLA!

And yes, Rochester, I absolutely got the message that your teen book festival is an amazing event. I am very seriously looking into attending next year (hopefully with Carolyn Mackler and my family...Isaiah would love the Museum of Play). And if any of you readers are near Rochester this May 18th, check out this list of authors you can meet!
Posted by Jay Asher at 3:54 PM

Wow, looks like you had a great trip! Loving the trip back to old school too (I mean, Teddy Ruxpin! Makes me think of "My Buddy"--was that even his name? And then, remember, Kid Sister? Ack.) I had no idea the first computer worked that way. My house obviously waited WAY too long to get one.

And I am not even going to go there about the things you want Teddy to whisper. (CREEPY!)

Glad your presentation went well and you got to see lots of great things. (Gorgeous books, for one!)

That is amazing! I went to The Penn Museum last month with friends in Philadelphia. That trip made us all decide to go museum hunting nearby or somewhere close by. Although I wouldn't really know about Teddy Ruxpin but I sure do remember that the first computer I've ever had was in 2001 and the first keyboard I remember is a typewriter. I would add this place to my list :)

Speaking of remembering... I was just going through old posts and remembered that I wrote about Thirteen Reasons Why and how it opened old wounds. Out of all the authors I've read you were the first one I interacted with. You even commented on the post I did. I just want you to know that up until this day I hold those very words you said dear to my heart and is my inspiration to keep writing.