Hey Now, You're a Rock Star

Last week, my family flew to Portland, Oregon to attend a performance at my nephew’s middle school. I love Portland! Not only do I have family there, it’s such a literary town. I’ve been there twice for speaking events. Also, that area gave us Beverly Cleary, and I love Beverly Cleary! Some of her best-loved books are set in Portland, and the town even renamed her old elementary school Beverly Cleary School. (In contrast, my town hasn’t even hinted that they’re thinking of changing my old high school to Jay Asher Senior High.)


Because I travel so much, when JoanMarie and Isaiah normally go to the airport, Isaiah knows they’re dropping me off so I can “Go to work.” So it’s nice when my airplane-loving son gets to fly on a “passenger jet” with me (even though he’d much prefer to fly on a “military jet”). 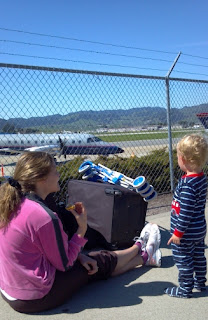 To keep him occupied on the flights, we brought plenty of activities. If that meant I became the stickee for his stickers, I was game. 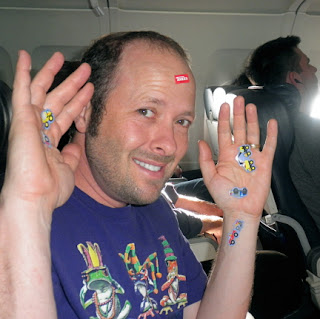 Like I said, Portland is a literary town. The day before we arrived, I noticed that several YA authors were speaking at Powell’s in Cedar Hills, a nearby town. (Aside from being literary, the people in that area are also very nice, including the officer who noticed I was driving at California freeway speeds. Sorry, Officer Warren.)


Here are Ann Aguirre, Lish McBride, Jessica Brody, Elizabeth Fama, Marissa Meyer, and JenniferBosworth. (Lish doesn't always pose like this, but sometimes a suggestion for an entire group to make the same silly pose doesn't work. Been there!) 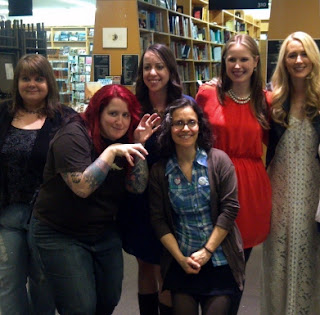 I then joined these authors and an assortment of husbands and friends at a restaurant for a late dinner, where I had one of my most enjoyable group-author evenings in a long time. We talked about hippie communes, movies, infinite moments, future book projects, and our favorite literary critics.
Then it was time to see my nephew, Ellory, rock. The students at his middle school produced their own rock opera. Yes, the students did it. Not only did they sing all the songs and play the instruments, they also wrote every song in the production (Ellory wrote three numbers)! 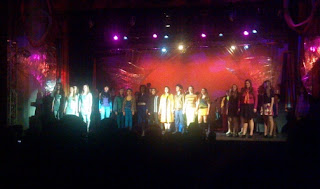 Space Out was a lot of fun (even if my nephew's character had to die), with great songs and singing. Here's Ellory during his solo. 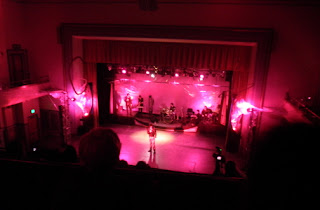 That wasn’t the end of our "rock" activities in Portland. Because Isaiah’s interest in heavy construction equipment is well known, my sister-in-law told us about a great site near her work, so we spent a lot of time watching rocks and concrete being moved from here to there. 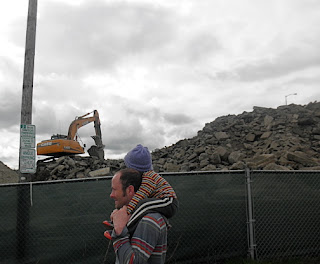 We also took Isaiah to see Mo Phillips, a great Portland children's musician and songwriter. Here’s my son rockin’ out on his air guitar. No, I don’t know where he got that stance, but I refer to it as Izzy Straddlin’. (That joke was brought to you by the letters G-n-R.) 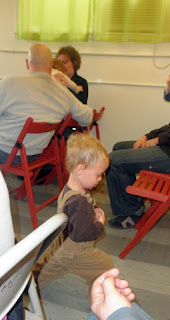 Then we put a real stringed instrument in his hands, and he instantly fell in love with the viola. This wasn’t a surprise since JoanMarie and both of his cousins played this instrument (or its cousin, the violin). 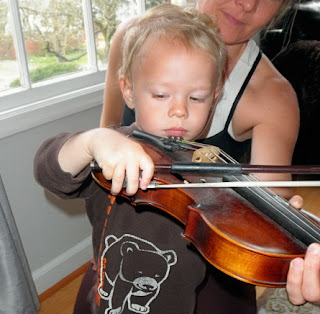 Every time he played a few notes successfully, he lifted his bow and beamed! 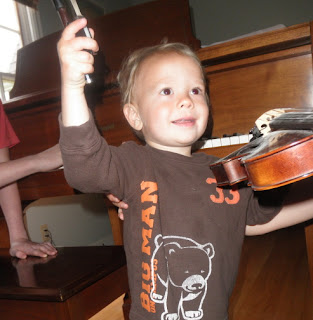 Next, I want to teach him to play the viola while doing the Izzy Stradlin’.
Posted by Jay Asher at 3:36 PM

In a word: Awesome.
Super kudos and congrats to the composers and creators of the show!

Next to reading and writing I'm a huge fan of classic rock, so your nephew's school performance sounds awesome! And boy oh boy, does Isaiah look like a natural! Way cute. :)

The poet I told you about:

By Philip Larkin 1922–1985 Philip Larkin
The mower stalled, twice; kneeling, I found
A hedgehog jammed up against the blades,
Killed. It had been in the long grass.

I had seen it before, and even fed it, once.
Now I had mauled its unobtrusive world
Unmendably. Burial was no help:

Next morning I got up and it did not.
The first day after a death, the new absence
Is always the same; we should be careful

Of each other, we should be kind
While there is still time.