This past weekend, I spoke at the first annual Teen Author Fest in Ithaca, NY.

When I announced that speaking engagement, I was bombarded with messages saying I was going to love that town. And now that I've been there, I wish I had arranged to stay an extra day. Ithaca has so many beautiful creeks and waterfalls, quirky shops, and great places to eat.

Of course, I still got to meet three great authors!

We each spoke and answered questions for about 90 minutes. First up was Elisa Ludwig... 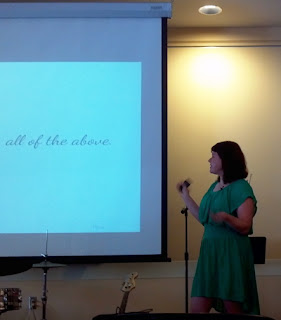 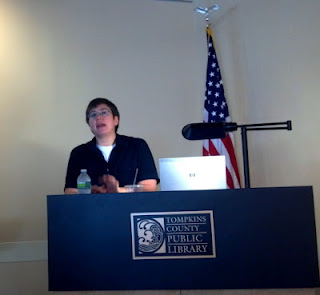 I spoke last, but between Madeleine and Shawn, a great student band played during lunch. Introducing...Bümph! 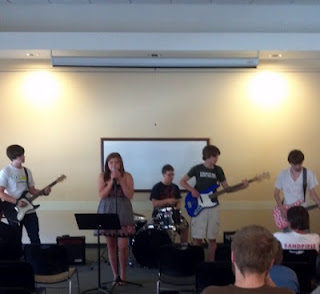 After the Author Fest, I strolled through The Commons in downtown Ithaca. As you may already know, I'm kind of a space geek. But I didn't know Carl Sagan had been a professor at Cornell (in Ithaca). In his memory, they built a scale model of the solar system, which begins downtown with the sun, and leads to the Sciencenter.

Here I am at the sun. 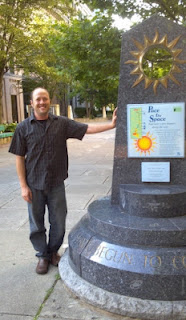 The hole in the structure represents the size of the sun. Over my left shoulder, you can sort of see the structure representing Earth (Mercury and Venus are out of frame). That structure also includes a sun-size hole, with a to-scale dot representing Earth placed in the middle. The structure itself is the to-scale distance between our planet and the sun. This solar system continues out to Pluto. Thankfully, they put too much work into the installation to remove Pluto when those dang scientists decided it wasn't a planet.

Then I took a trip to the Ithaca City Cemetery as research for a possible future writing project. As with anything spooky, it looks much better photographed in black-and-white. SO wish I could have been there! I went to Cornell and my love for Ithaca knows no bounds! Looks like it was a ton of fun.

Ah man, I'm totally bummed I didn't see your announcement for this. Ithaca is only 35 min from me! :-(

I love the town! Glad you enjoyed it!

Then there are 2 of us creepily visiting cemeteries for writing projects...

1st annual means it will only continue to grow, possibly. how exciting to come in on the ground floor, and with a side order of sagan to boot. sounds like a fun trip.