Soon after flying into Harlingen, Texas, I went out to dinner with a couple of high school librarians. There, I was introduced to one of the best cheeseburgers I'd ever had the pleasure of making disappear. The next day, I lunched on a scrumptious BBQ sandwich with English teachers. For dinner, I had a chicken-stuffed and deep-fried avocado. The next day, I joined a school's book club for lunch where we shared some amazing Mexican food. They even made the tortillas right there! That night, some spicy and delicious BBQ.

My stomach absolutely adored this week.

But in between all that good eatin', I also did a lot of speakin'.

First, I spent the day at Med Tech. This school was just oozing school spirit. They had a specific theme every day this week. During my visit, they were raising awareness and money for breast cancer research and prevention. As you can see, almost every person was wearing pink. Usually a lot of pink, including in their hair! 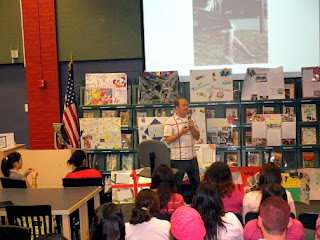 In the above photo, you can see some of the Thirteen Reasons Why displays the students made. Here's one which photographed particularly well. 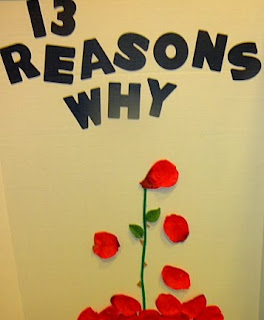 I must say, I've visited a lot of libraries while traveling around to discuss my book, and the three school libraries I visited on this trip to Texas were on the tippity-top of the tippy-top tier. It really is amazing what they've got going on here.

During my second day, I began by speaking to students at the Gateway Library. This included one of the best Q&A sessions I've ever had. I probably could've stayed another hour and still been fielding questions, which would've been great. But, of course, we had to eat!

Before I feasted on catered Mexican food with members of the book club, everyone went around dropping notes of encouragement into the personalized paperbags of the other students. Yes, just like in my book! They even made a bag for me, and I think I may have received the most notes. Woo-hoo! (Not that it was a contest or anything...) 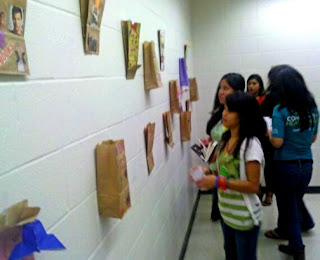 I presented a writing workshop that afternoon at Biblioteca Las Americas and I'm really upset that I forgot to take pictures because so many of them were dressed up for Halloween. There was even a Penguin! I also figured out a way to toss a sliced banana at students in the library and get away with it. All you have to do is pretend you're teaching them a lesson about storytelling. Seriously, with this job, you can get away with practically anything if you work it right!

The poster which led people to that writing workshop and the following presentation was my favorite event poster ever. While at Med Tech the previous day, one of the librarians took a close-up photo of my shoes while I was speaking. They blew up that photo, added text, and wa-la! 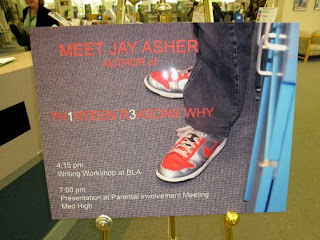 That evening, I spoke at the Parental Involvement meeting. I discussed the importance of making sure issues such as the ones presented in my book weren't swept under the rug. In fact, we need to do a better job of bringing those issues out in the open so people aren't afraid to talk about them. It was the largest group I'd ever spoken to about such serious issues, but I had some of the most honest conversations with parents afterward, which made the night end beautifully. 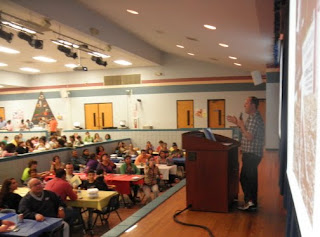 And then some dude asked me to sign his chest. 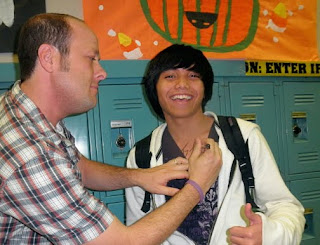 (1) I love that the first half of this post is about food (homemade tortillas? Amazing).
(2) That poster rocks (told you they were cool shoes).
(3) His chest? How very rockstar-ish you are!

I say your presentation on Thursday at BETA's Library "Gateway To The World". It was super exciting and I'm happy you enjoyed our school and food. Hope to see in the future if you decide to make a movie out of Th1rteen R3asons Why!

ahhaahah I was there when you signed his chest! hahahaah

Glad to hear that you had such a great time, Jay! I wish I could have been there because it all sounds like so much fun! =)

I think every story should end, "And then some dude asked me to sign his chesT!"

Congrats on an awesome Texas :)

As a big-time avocado fan, I'm trying to imagine one fried...

My mother-in-law makes homemade tortillas and they are amazing!

I bumped in to you at the Ventura/Santa Barbara SCBWI writer's day. It was nice seeing you in person!

Man, I'm in Texas but not a student! Otherwise, would have loved to hear you speak!

Hi Jay! I was the reporter who interviewed you and took those group pics of you with the students, I FINALLY got to read your bokk after convincing a student to check it out for me at Biblioteca Las Americas (My local Barnes sold out) and I was blown away! I read many many books, but not many affect me on an emotional level as yours, I did not think I could relate since I am no longer a teen, but I could, I even remembered what it was like to be 15 again, I could feel Clay's despair, it is similar to the despair I feel when I see any 9/11 footage, this book should be complex with all of the characters and subjects but it is not. You leave enough for the reader to fill in gaps and understand whats going on in each action. All I can say is BRAVO for your first book being so good and making a positive difference. I will definitely purchase any book you write from now on and will order my own 13 Reasons Why :)