Local Boy All Growed Up

Friday night was the beginning of the 26th Annual Central Coast Writers' Conference. The keynote speaker, Nathan Bransford, had a lot to live up to. His blog is one of the absolute must-reads for any writer hoping to get published. So how did he do? Sure, he's nice and charming and smart and engaging and optimistically realistic and informative and funny. So yeah, if you like that sort of thing, you would've loved his talk.

That was followed by the first workshop session. In this biz, the author I've been friends with the longest is Kathleen Duey. So I was feeling pretty cool getting to "guest speak" in her workshop to a class full of teen writers. No, not adult writers writing for teens, but teenaged writers. While this conference is geared toward adults, they've started offering teen-writer tracks, as well as special scholarships for those teens. Much respect to the people who thought of that!

On Saturday, I attended a few workshops which gave me ideas for writing topics to discuss later on my blog. But in each of those workshops, I was slightly nervous because in the afternoon...I was to be presented with a plaque! And they expected me to say something inspiring! THE PRESSURE!!! 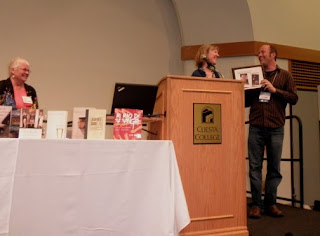 Conference Director Judy Salamacha and Cathe Olson
They named me the Central Coast Writers' Conference 2010 Success Story, which was an extremely kind and wonderful honor. I began writing while attending Cuesta College (the location of this conference), and the Central Coast Writers' Conference was my first professional step toward publication. So I briefly shared with them some of the ups and downs of my journey, and I even let them in on a little secret that I haven't shared publicly yet.

Hey, I told you to attend! 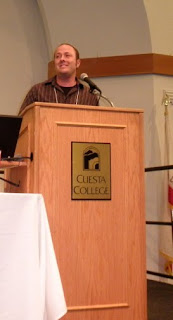 And the after-party? Mmm...! It was held in the beautiful garden at Coalesce Bookstore in Morro Bay, and they had nummiest hors d'oeuvres I've ever had. Let me repeat: Mmm...!

See ya there next year! 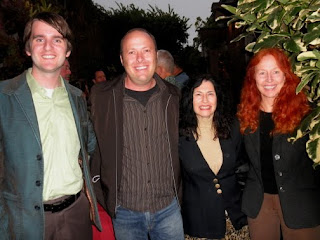 Nathan Bransford, me, Merrily Kutner, Kathleen Duey
Posted by Jay Asher at 12:01 AM

Wow! Looks like a great conference. I need to be in the West! :)

There are a lot of great conferences out here. But look around, I'm sure there are some closer to you!

Wasn't that a great conference! So fun to get to talk with you. Congratulations on your award and on getting going with that next project. Sounds exciting.

And I agree. The world's best party food, ever! The wine was pretty spectacular too.

I was an attendee and loved your speech. Yes, teared up. I'm good that way.

Congratulations on all your success. I wish I introduced myself in person, but a blog is the next best thing, no?

It was fun. I love leaving the office of silence and daydreams to hang with other writers for a day or two. The adapting screenplays-to-novels session gave me a lot to think about.

Loved meeting JoanMarie. How smart you are to have a lovely wife--who is a really good musician!!! I love the CD.