I'm not (very) embarrassed to admit that I was a huge fan of the original Beverly Hills 90210. Of course, I probably wouldn't bring it up unless I had an extremely good reason. And that reason is, today's...

International 90210 Day!!!
We won't get another chance to celebrate this wonderful day until September 02, 2110. So you might as well party it up now!

Before you laugh at me too much (I'm not sure what constitutes "too much" in this case, but I'll let you know when you reach it), let me remind you that Beverly Hills 90210 was fairly groundbreaking in its early years, tackling subjects like drugs, sexual abuse, eating disorders, and lying to your parents(!!!). Yep, that was controversial stuff back in the early '90s. Thankfully, our society isn't afraid to openly discuss those issues today.

When the show was in its first season, a bunch of my guy friends were really into it. But I was much too cool to watch a show with such a silly name, so I made fun of them. Eventually, I had to start watching it just so I'd have something to talk about with them during lunch. And then...

I got totally hooked! I needed to know what trouble Steve was going to get into next. Was Donna going to lose her virginity to David on prom night? Would the hairless patch on Dylan's eyebrow ever be explained??? 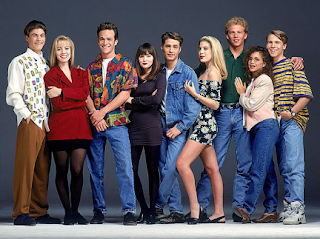 Here are some me-centered 90210 facts:
And now, for your viewing pleasure, the opening theme song and credits to the original (and still the best) Beverly Hills 90210...

(If you never caught the episode titled "A Night to Remember", you're probably wondering: Did Donna and David do it on prom night? Well, it truly shouldn't matter anymore. Seventeen years, one month, and twelve days later, David married Megan Fox.)
Posted by Jay Asher at 5:00 AM

You made my day, Jay Asher!

Team Dylan or Team Brandon? That was all the girls at school argued about. lol.

Just last year, I was sitting on a couch in a hostel in Tokyo and a rerun of this came on. Every single person in the room was in their late 20's and 30's and had loved the show growing up. Watching it as adults, we couldn't believe how corny it was. lol.

See, that's how groundbreaking it was. Long before Team Edward or Team Jacob, it was Team Dylan and Team Brandon.

I'd forgotten about that because, among my guy friends, there was no lover's quarrel. It was Team Kelly for all of us!

I loved the show growing up. When I got older and they were out of college my best friend and I would sit on yahoo and watch the show chatting back and forth about what we liked and didn't like.
I tried to watch the new series, but I couldn't get into it. The original was just to hard to replace.
I have to say the only thing that every made me mad was when they made Ray start abusing Donna. I thought that was kind of crappy they made the blue collar guy be the abuser instead of some middle class or rich kid. I liked Ray.
You made my day a little brighter. Thanks.

*I would love to know who contacted you about making the book into a movie. hee hee

I agree with you about Ray. I liked him because he was such an outsider, and a good songwriter, which made it much more heartbreaking when he turned out to be an abuser. But if it wasn't that, he would've been a drug dealer or an alcoholic or something else. No one got away clean on that show!

And Catherine, don't tell me you missed the UK celebration!

It was always team Dylan for me. What is it about those bad boys?

No Use for a Name does a great version of the theme song at the end of their Making Friends album. :)

I was in junior high and high school when 90210 was on TV, and I still remember not being into it at first - but watching it because all of my friends did, and subsequently getting hooked (I even bought the trading cards!).

I remember trying out "Friends" because all of my girl friends were into it as well - but that show never went beyond the catchy theme song for me.

Okay, I am embarrassed to admit this (which is why I didn't mention it in the post), but since Sabrina brought it up...I also had the trading cards.

Wow. I didn't think you could do it, but you just got cooler.

He DOES have a hairless patch on his eyebrow! What is UP with that?

And I have to say, wow, you are the only guy I know (and by know I mean I blog stalk you and harrassed you while you waited in line at SCBWI--but whatevs, it counts) who will openly admit to watching 90210. But maybe that was because I was class of '98 (well, actually '99--I finished a year early) so it was kind of 'past the cool' by the time I was watching it. But I LOVED it. I swear I've seen every episode. Twice. And I met Jamie Walters once (yanno, Donna's singing bf who threw her down the stairs?) I totally went fangirl on him.

But the best was when I actually worked in Beverly Hills, at an office IN the 90210 zip code. Yeah...I pretty much giggled every time I gave out the address. I'm awesome like that. ;)

As the true 90210 fan you were (trading cards!), here's a podcast Bill Simmons just did yesterday. Two hours of 90210 goodness. Hope you'll enjoy it. I mean, how could you not?