When I first began speaking at schools as an author, I was terrified. So here's a tip for any brand new authors looking for a good place to test the waters. Come to Houston! The students here are great. They're interested in books, they ask great questions, and (my favorite part of all) it's so easy to make them laugh!

Even though it was a Saturday, students from nearby middle and high schools decided the best use of their day would be to spend it listening to a bunch of authors talk. Why would they give up half of their weekend for that? Simple answer: Because they rock!

The day began with an awkward moment when the ROTC marched the U.S. and Texas flags to the center of the stage. Everyone said the Pledge of Allegiance to the American flag, and then they said another pledge to the flag of Texas. The problem? Everyone in the room, including the other authors, were Texan. Everyone, of course, except me. So I held my hand over my heart, but I didn't say the words. Actually, I didn't know the words. But now I'm wondering, since my hand was over my heart, do I need to somehow make amends when I get back to California?

After that awkwardness, I gave the opening keynote speech. 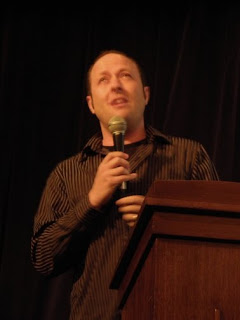 I shared a bit about my journey as a writer, including some discussion of previous manuscripts I'd written. 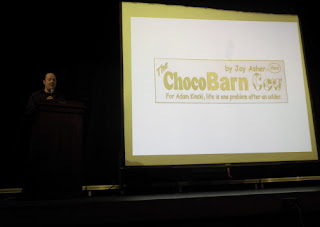 One of the other authors speaking at Nimitz High School was Jennifer Ziegler, author of How Not to Be Popular. Jennifer and I had a ton of fun discussing things like negative reviews, diva authors, and the fact that even though schools far away will fly us in to speak and put us up in hotels, schools right where we live often don't seem very interested in hearing "local authors" speak. 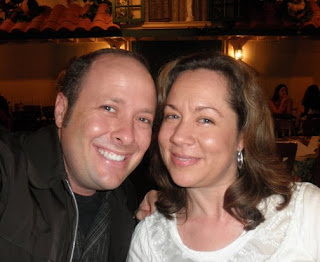 But that's okay, because Houston likes us! And the students here, such as everyone in the photo below, rock. I know I already said that all of these students rock, but it's true! 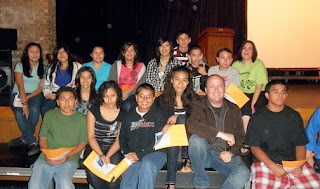 After my keynote speech and lunch, all of the speakers had three back-to-back sessions where we got to speak to smaller groups of students about our work. 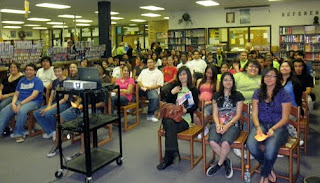 So thank you, Houston, for making me feel at home. (And did I mention that y'all rock? You do!)

I hope by now everyone knows how much fun I have traveling around, meeting my readers face-to-face (and hopefully making new readers along the way!). I just checked my calendar and I've been in a different state every week since the end of March. It went like this: Washington, Texas, Kansas, New Jersey, Michigan, Ohio, and back to Texas.

And it's been great! But I am so happy to now be able to spend some uninterrupted time at home with JoanMarie. Even though I haven't been home much, we've had a very exciting life the past several weeks.