Today I finished reading the latest issue of Entertainment Weekly. Later in the day, while reading The New York Times, something odd caught my eye...

As mentioned in a previous post, I absolutely love Stephen King’s EW column, “The Pop of King”. His latest column is called Decoding Movie Blurbs. He translates what it really means when an ad claims a movie is “Delightfully funny!” or “Fun for the whole family!”

“One of the best films of the year!” This is the Mother of All Blurbs, most commonly sighted on TV and in newspapers around awards season. TRANSLATION: “It’s not.”

But now check out this ad from The New York Times: 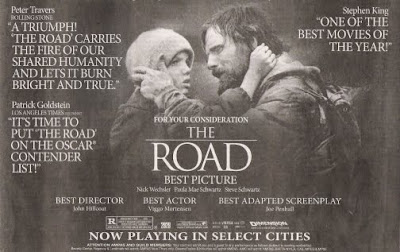 (Yes, it is awards season.)

Several times, I have purchased c.d.s, read books, and seen movies based on Mr. King’s recommendations. And he’s been right every time!

But now...which Uncle Stevie do I believe?
Posted by Jay Asher at 6:35 PM

Everyone is wrong at least once, and this time he is definitely wrong. The Road is a great movie based on one of my favorite books of all-time.

I've noticed most of those catchy phrases on movies, just because they're. They might as well say, "Everyone will end up seeing this, either in the theater or on TBS in five years."

You might have noticed that The Road was not a box-office hit.

In a study of irony, I showed my community college writing students the Swift/Elliott miracle "When Love and Hate Collide."

Hahaha that's too funny. I love The Pop of King. He's awesome, and completely unapologetic.

You should send a letter to the editor of EW.

I plan on seeing The Road no matter what Mr. King says...or doesn't say.

And Debby, I just sent it off!