I think I hid it well, but I had an insane amount of butterflies in my stomach all day. One minute I would be completely excited, and the next minute totally nervous. Seven months ago, a high school drama teacher asked if her school could turn Thirteen Reasons Why into a play...and I said yes.

At seven in the evening, I would find out. Thankfully, the school kept me busy during the day. 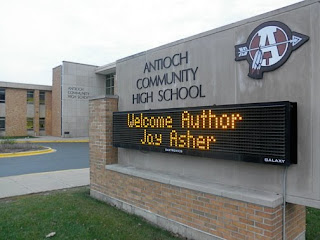 I began the day in a discussion with the Seminar for Scholars group. This group meets about once a month to discuss controversial issues with guest speakers. It's been a long time since I've heard any group of adults dissect and discuss moral issues with as much openness and honesty as this group. 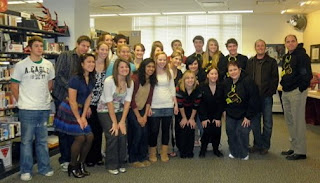 During the three lunch periods, I gave three presentations in the library. 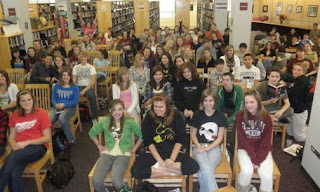 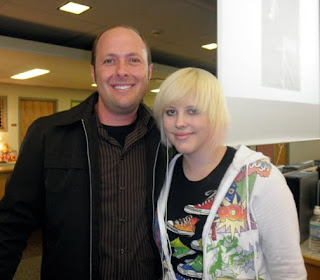 After school, I walked around the beautiful downtown streets. The alternative would've been to pace back and forth in my hotel room, watching each minute pass on the digital clock.

Finally, it was six o' clock and I headed back to the school.

The halls were decked out with posters depicting the different covers of my book from around the world. From the ceilings, they hung giant cassette tapes.

And the brownies? Delicious! 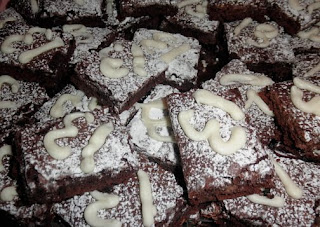 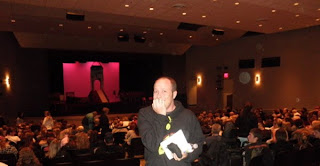 I chose a seat near the middle of the audience. J-113. When the lights went down, my pulse began to race.

For the next two hours, I sat in my chair and watched Thirteen Reasons Why brought to life on a high school stage. When the entire cast returned to the stage at the end of the show, I clearly had my answer as to whether or not I was crazy to entrust my story to these students. 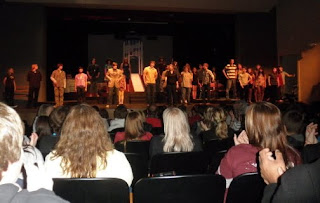 No. I was nothing but honored and awed by the performance.

The staging and lighting were beautiful and extremely creative. The momentum of the story kept building, and every actor and actress fully embodied their roles. They literally brought Hannah, Clay, Tony, Jessica, Courtney, and the rest of the characters (yes, even Bryce) to life right in front of my eyes.

Many times throughout the night I kept thinking, I can not believe what I am experiencing right now.

When I was called to the stage, I took a moment to shake the hand of the actor who played Clay (in the yellow shirt) and give the actress who played Hannah a hug. She had to memorize an unbelievable amount of dialogue! 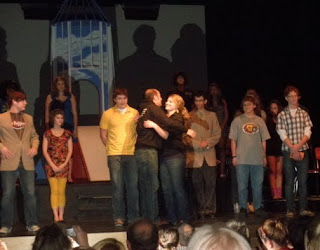 I will never forget this night. 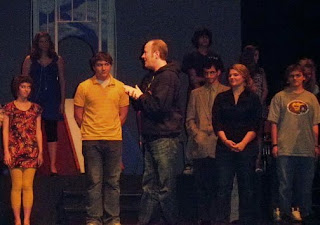 From here on out, I will always consider this Friday the 13th as one of the luckiest days of my life. 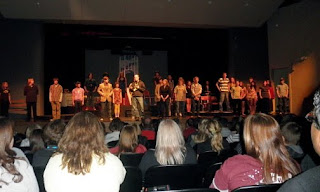 What a great day! I could not be any prouder to be part of this community. Thanks Jay for allowing this incredible series of events to play out so successfully. Kudos to the students and staff that demonstrated how wonderful and incredibly talented you all are.

It would be sweet if they recoded this and put it online!

Those brownies look great. I'm sure the show was amazing and that the school was just as honored to have you there as you were to be there.

I got all choked up for you, LOL How wonderful.

Did they let you keep a giant cassette tape? That would be a cute memento. =]

I read about this performance in the local paper. My daughter was reading the book and I told her about it. She immediately insisted we needed to attend - mind you, Antioch is a loooong drive for us. But then, I read your book too. She was right - we had to go. What an amazing cast, crew and directors. And Jay, thank you for saying "yes."

How wonderful! I'm glad it was such a success.

This is . . . completely awesome. Even your name on the marquee is awesome, and it kept getting better from there. Congratulations!!

the girl who played hannah is one of my best friends from middle school and i was so proud of her! she had so much to memorize! i go to the other school in the district lakes and it was so cool to see them put this show together
and have you there, such an honor for our community
i really am intrigued to read the book now

glad you enjoyed your time in antioch

It was an excellent show, I enjoyed are meeting in the morning for seminors for scholars and i even can to here your presentation in the lunch period twice ( my english teacher took us and so I has the honor of listening to you twice). I could see ur excitment during the play as i looked back and you waved and me with which looked like a perfect blend of anxious excitment. One of my best friends played the role of Clay during the play so i was very excited to see him preform. In the end I was wowed with the creativity of everyone involved from yourself down to the actors. I had seen many plays in my life ranging from high school to professional. This had topped my list by then end. Thank you for your time spend at antioch and i wish you the best of luck on future projects in the future.

The interpretation of your novel must've been really amazing!

How exciting for you to see it turned into a whole other medium.

And it's awesome that you said YES to the cast and crew's opportunity.

You finally got to see it! Congrats to the cast & crew for doing such an awesome job.

I still haven't stopped talking about how amazing the production was. It was just...amazing!

As a gift, they sent me home with one of those digital picture frames that you can load up with tons of photos. The frame is sitting on my writing desk right now, flipping through shots from their rehearsals!

(And yes, I wore the hoodie again today.)

The director, Wanda Teddy, is my cousin. She's always had an eye for stage creativity. Thanks for trusting her with this phenomenal undertaking of breathing life into your literary creation. For the record...I taught her everything she know's about stage lighting and sound. ;o)

I'm actually so excited for you that I'm crying as I type this. Kudos to the kids who performed it and the people who transformed it into a play. I hope to see a stage production of Th1rteen R3asons Why someday. :O)

That is so awesome! I wish I could have seen that. It sounds like it was amazing :)

Sounds amazing! I wish I could see this!

This is the greatest. How cool for you to be able to see your book made into a play by teens who love it. Congratulations to you and to the students.