JoanMarie and I love handing out candy to trick-or-treaters, so that was a difficult thing to give up this year. But for some reason, we felt like scaring ourselves silly this Halloween...so we headed down to Universal Studios Hollywood for Halloween Horror Nights!

The park wasn't scary during the day. We went on all of the rides and caught most of the shows, including the live-action Waterworld. 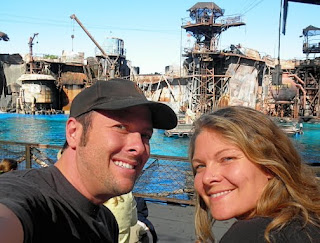 I got to hang out with Lisa Simpson, who is much taller than she looks on TV. 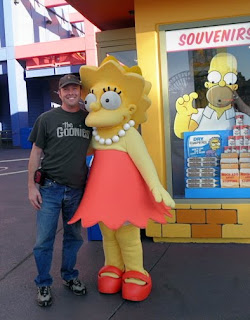 If JoanMarie hadn't warned me just in time, I would've been zombie lunch. Thankfully, zombies are much easier to outrun than they appear in the movies. 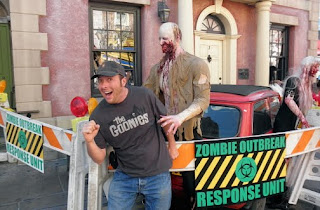 For JoanMarie, the highlight was probably getting to stand mere feet from an outfit Johnny Depp wore in Public Enemies. (You'll notice, she just happened to be wearing a Cry Baby t-shirt on this day.) 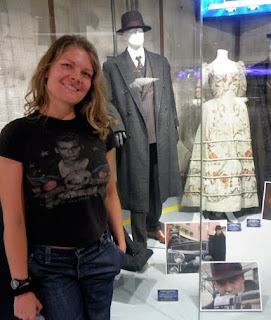 After getting to stand so close to Mr. Depp's costume, even getting eaten by Jaws couldn't keep her from smiling. 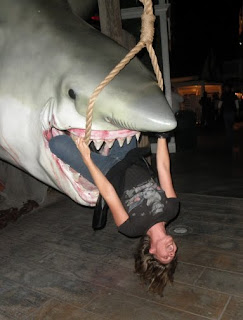 For the scary part of the evening, we met up with a couple of friends, Natalie and Floyd. 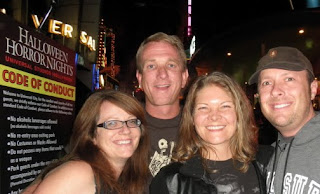 I was really looking forward to Halloween Horror Nights because I love all things eerie and scary. And HHN did not disappoint! There were very well-constructed mazes (similar to haunted houses) based on Saw, My Bloody Valentine, Chucky, and Halloween. And there were six "scare zones" throughout the park, fog-blanketed sections where costumed actors stalked you and chased you...often with buzzing chainsaws!

But next time, I promise to come to JoanMarie's rescue if she gets chased up and down a scare zone by a chainsaw-wielding psychopath rather than trying to take their pictures. That was insensitive and I should not have assumed that she was enjoying herself simply because she was smiling and laughing. 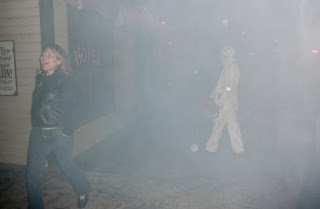 JoanMarie: You are forgiven.
Posted by Jay Asher at 7:15 PM

That looks like so much fun! It's great to see pictures and mini re-caps of all your travels. Thank you!

Haha that looks like so much fun! My friends and I went to HHN this year here in Florida, and it was so much fun! I wish we could have gotten some pictures like you did. We were too busy running around. Glad to see you had a blast~