We're All in This Together

To prove to their parents that JoanMarie and I have been keeping their kids safe, here are some shots taken today. But mostly, I'm just putting them up because we had so much fun with our niece and nephew!

Boomers! was where we spent most of the day. And I won't mention that I kicked everyone's butt at miniature golf because it wasn't about competition. (But I did win!) If you look closely at this shot, you can see that JoanMarie has mastered the art of golfball levitation. 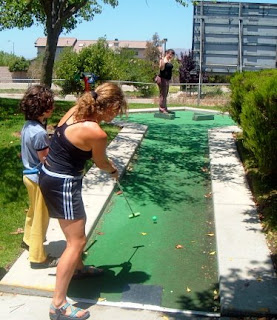 Then she and Genevieve played air hockey. I don't think it's even legal to visit an arcade and not play air hockey! 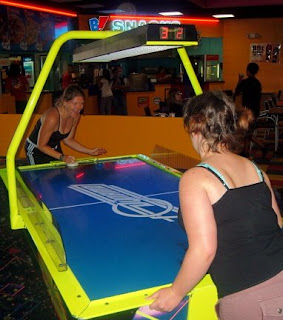 Then we all got drenched on the bumper boats. 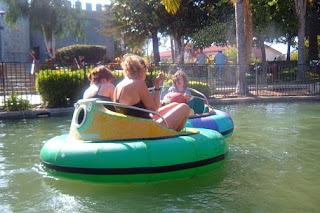 While Genevieve and I were able to edge past Ellory and JoanMarie a few times in our go-kart (no bumping!), they usually held the lead. This was our view the majority of the time. 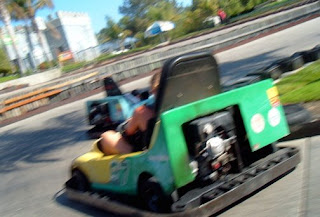 Then we took them to a cool diner made out of two old train cars. If you go to the Rock & Roll Diner, you have got to order a chocolate malted shake with peanut butter and banana. This is Ellory begging for more of my whipped cream. (No, I didn't give in. He had his own!) 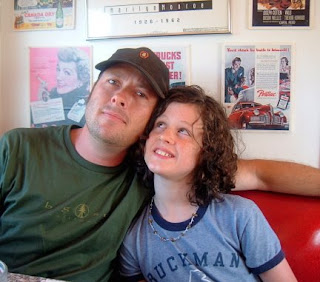 But the big hit of the past several days? The High School Musical soundtrack. I grabbed it at the library before their visit, and it's been a great time-consumer. You see, everyone on my wife's side of the family is musically gifted. (Did you not see my last post?) In this photo, Genevieve and Ellory are doing a duet to "Start of Something New". And tonight, JoanMarie figured out "Breaking Free" on our piano. 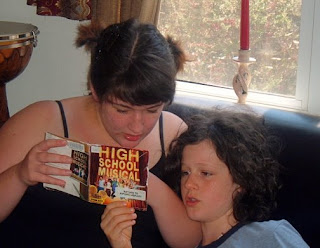 I'll admit it. The songs are good. In fact, this morning I woke up singing:

This could be the start
Of somethin' new
It feels so right
To be here with you...oh
And now, lookin' in your eyes
I feel in my heart
(Feel in my heart)
The start of something new

I just hope I don't wake up tomorrow singing:

i JUST finished your book. i picked it up out of curiosity this past saturday and haven't been able to put it down. the characters--especially hannah--really touched me. ive been battling my own "snowball" for the past two years and have come close to caving on the temptation just to 'sleep' on more than one occassion. i identify with hannah on many levels and note this as a cause for concern. i started seeing a therapist at the start of this month and will be sure and drop you a line when i'm feeling more like a jenny. this whole book was just PERFECT as far as describing how i feel towards myself and mainly life. thank you, so much. i will be watching for more of your work in the time to come. i want to be around for that.

I've got bad news for you. Those songs will be forever embedded into your brain cells, like with perma-glue.

When I read the lyrics on your post my brain immediately started singing them.