Near the Island of the Blue Dolphins

On Saturday, JoanMarie and I took a boat trip to the Channel Islands. I'm embarrassed to admit, but I completely forgot there were a whole bunch of islands just off the coast until I flew over them a couple months ago. (I guess I should've paid more attention during fourth grade California history.)

On our journey to Santa Cruz Island, we saw these sea lions taking a break from all that swimming. 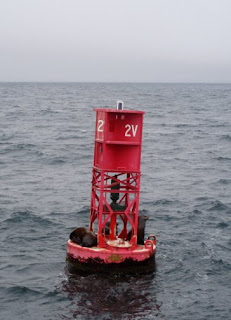 Here's a pic of our boat after it dropped us off. (That's the California coast in the background.) 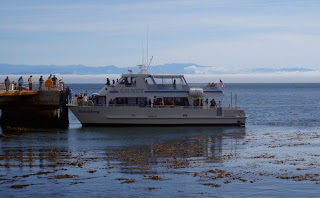 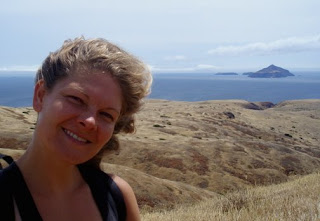 But even on an island, it's easy to get lost. (And yes, there were plenty of Lost and Gilligan's Island jokes.) Thankfully, they had really creepy signs like these to keep us on the right track. 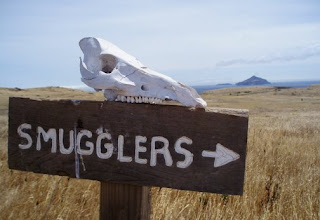 Santa Cruz Island is part of the Channel Islands chain, which includes San Nicolas Island. In its honor, we brought a copy of Island of the Blue Dolphins to read from. 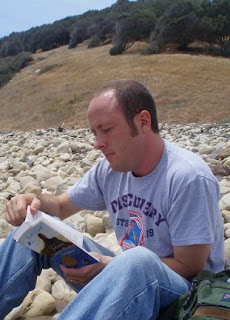 When we got back to the boat, I was feeling pretty good. Not only did I get in a good hike and visit a stunning beach, the boat was departing ten minutes early. That meant I would have plenty of time to visit Ralph's Comic Corner for Free Comic Book Day. (Yes, I did feel a tad guilty thinking about FCBD while surrounded by such beauty.)

But halfway home, the boat turned around and started following...a humpback whale!

As we continued our journey home, some other creatures of the sea decided to play with our boat. 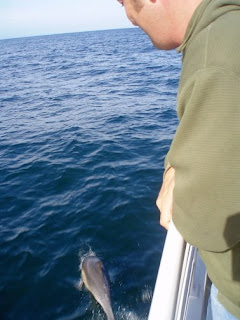 Dolphins! It was truly magical. 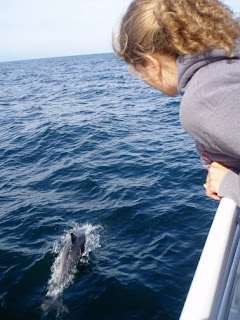 And I even got to Ralph's Comic Corner with ten minutes to spare.
Posted by Jay Asher at 12:01 AM

Awesome! Oh, I miss California. I wonder what sort of magical creatures I will see on the subway this morning...

My son and I just finished reading that book together. How wonderful that you actually got to visit the island!

i remember reading island of the blue dolphins and thinking of how amazing it was even though there wasn't much talking. i'm glad you enjoyed! :)

I don't remember reading Island of the Blue Dolphins when I was younger, but I finally listened to the audiobook about a year ago and loved it.

My sister's college boyfriend came from one of the last families to own private ranchland on the Channel Islands (I think they have some law against inheritance out there, so the land holdings will revert to public land at a certain point? Or maybe I'm totally wrong.) Anyway, she went and stayed out there a couple times.

And: is that where Island of the Blue Dolphins is supposed to be? Maybe it's a stupid question. I read it so long ago, I just can't remember.

According to the Author's Note, I.o.t.B.D. was inspired by a real girl who jumped from a ship carrying the Native Americans away from San Nicolas Island in 1835. She lived on that island alone for the next 18 years.

I was never into historical fiction when I was younger, but I'm really getting into that genre now!

This sounds like a LOT of fun! And who could blame you for thinking about FCBD amidst all of that natural beauty? Not me my friend, not me! Although I sadly worked through it all trying to make my Monday (yesterday) deadline (which I did) but barely slept for 3 or 4 days let alone left the house.

And I hope it goes without saying, but we LOVED seeing you last week and look forward to hanging out again!

What an awesome day! Jealous we couldn't be there to share it with you guys. Looking forward to seeing you in a couple of weeks. Cheers,

What a great day for the two of you! When you come to the NW once again, you and JoanMarie will have to take in the killer whales in the Strait of Juan de Fuca.

Island used to be a favorite in my first few Battle of the Books competitions.