This past weekend, on my annual trek to Writer's Day in San Gabriel, I had many exciting moments. Most of them were due to being excited for other writers, and I'd like to share a couple of them with you.

I went down a day early to meet and have coffee with an author whose first book comes out next year. Lauren Oliver used to be an editorial assistant at Razorbill, the awesome Penguin imprint which publishes my books. In fact, she's the editor who acquired Suzanne Young's forthcoming series, The Naughty List. (Sidenote: I can't wait till Suzanne shows you the cover for Book 1. It's one of the most gotta-pick-it-up covers I've seen!) I had the opportunity to read an early copy of Lauren's teen novel, Before I Fall, and I absolutely loved it. They even let me give it a blurb!

Since Lauren had already helped other authors realize their dreams of getting published, I assumed it wouldn't be as special for her. Boy, was I wrong! She was so excited about eventually seeing her book on bookshelves, I couldn't help but re-experience that same ecstatic anticipation.

I'll tell you more about her book when it gets closer to publication, but here's a photo of my first meeting with Lauren: 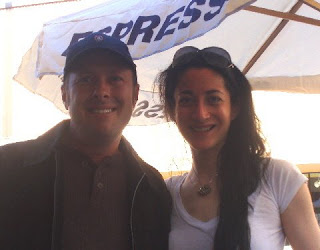 As well, I want to re-congratulate Rita Crayon Huang on winning first place in the middle grade fiction category at Writer's Day. I've been hanging out with Rita at these conferences for several years but have never known her to enter one of the contests. Finally, she did...and she won! When they announced her name, the look of complete joy on her face put a very similar look on my face. After they gave out the rest of the awards, I went to dinner (then dessert!) with Rita, Lee Wind, Greg Pincus, and Anastasia Suen. The entire time, no matter what we were talking about, I swear Rita was glowing. It was so very cool!

Yes, I have been having a ton of fun with my own book. But there is something so pure and magical about enjoying the successes of other writers!
Posted by Jay Asher at 1:00 AM

Wow, look at you hanging out with all the cool kids!

And Lauren Oliver's book will be my number one can't miss novel. I'm so glad you blurbed it.

I really like how you think, Jay. In this world where so many are self absorbed, it is beyond refreshing to read something where a human being looks out instead of in.

Tell Lauren "Way to go!" Remember at ALA how she and you hunted down a Penguin pin for me? If she needs a librarian to review the book, I am her girl! Joan

I am SO excited for Suzanne's book.

oooooooooh, I've heard about the Naughty List! I can't wait for it to come out.

Yay, I'm excited about The Naughty List! Can't wait to see that cover!

I even brought it into my college students to show them.

I fell so in love with Joe Elliott (again), I named my new character after him.

Nobody steal that. I'll have to hurt you or something.

A.T. & S.Y. - It was a great weekend! And I'll definitely be recommending Lauren's book to people who liked 13RW.

J - I remember. Do you still have that pin?

J.E. - You spelled Joe's last name right! It's two Ts, but hardly anyone writes it that way. It's official...you rock!

I have no idea what to say to this post, except: JAY ASHER IS SO COOL!!!!

But it's not the same, because everybody knows that.

Thanks, Jay!! :) :) Getting dinner and hanging out with you and Lee and Greg and Anastasia, after, was exactly what I needed.

Still geeking out about getting to spend a whole two hours picking your brain! Thanks for everything...and I can't for Suzanne's book to take the YA world by storm!