I've never been a country music fan. I appreciate it, and there are a few songs I can get into, but it never fully connected with me. Because of that, I've never watched CMT (betcha can guess what that stands for!). Sure, some of the shows sound rather interesting. Redneck Dreams. Trick My Truck. My Big Redneck Wedding. And in case you think I'm stereotyping, I'm not. Those are actual shows!

But then I heard a rumor. They have this show called Crossroads where country artists take the stage with musicians from other genres. And apparently my favorite band of all frickin' time made an appearance. So I did some research, and to my astonishment, it was true!

Here's how CMT described it:

Great music knows no boundaries as Great Britain's premiere arena rock band and a country superstar take the stage together in Nashville. You won't want to miss it as Def Leppard and Taylor Swift collaborate on each others' hits in front of an invitation-only audience.

To my total astonishment, the pairing worked. In fact, it rocked! And yet I have no idea how it worked or why it rocked so hard. And since I just discovered it a few hours ago, I have to share it with you.

Check it out here!
During college, I once camped out a few days for a chance to get front row seats at a DL show. But then the newspaper ran a photo of us campers and my boss learned I wasn't actually at home suffering with the flu. Another time, in 1999, I called a national morning radio show and did something insanely embarrassing on-air (don't ask!) to get tickets to a live show which was only open to 200 fans. Here's a photo taken with one of the guitarists after that show. (Phil! Remember me?) 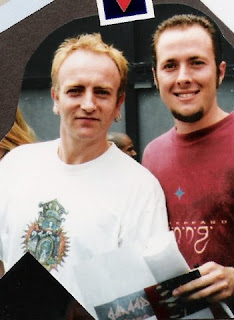 And here's a photo I just now found online. (I thought, I wonder if anyone posted a photo from this small show which happened 10 years ago. Turns out the answer is...yep!) You can actually see me standing right next to the stage in the lower-right. Just look for the sideburn and burgundy shirt. Yes, that was one of the happiest moments of my life! 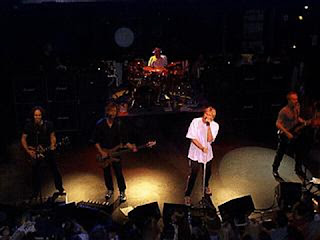 And yes, I know you're jealous. At least, you should be!

Notice: A reader just informed me that the above version of Photograph is up for two CMT Music Awards. As well, Ms. Swift is up for a few more solo awards and DL is up for a song they did featuring Tim McGraw. So...go vote!
Posted by Jay Asher at 1:01 AM

That's too funny. Crossroads IS cool. I love it when they mix genres like that. And I live in Redneck country, so shows like Trick my Truck are actually personified out here! My father in law built a motorized cooler and a potato gun which he uses to shoot the dental office across the street from his business. We call him the high-tech redneck. He provides me with great writing material.

High-Tech Redneck? Your father-in-law could have his own show on CMT!!!

Seriously, that's a show I would watch!

I find this funny since I was just posting about why I like country music even though most people laugh at it... Granted, there are plenty of awful country songs. Especially most of the newer ones.
But there are also some that really rock!
*cough http://www.youtube.com/watch?v=cDm_ZHyYTrg cough* >.>

Ellen, The Devil Went Down to Georgia rocks! I don't know if it's possible to not love that song.

Wow - I adore Taylor Swift and, well, let me just say that Photograph would have to be one of my top ten all-time favorite songs. I wonder if they'll replay that show, I'd love to see the whole thing!

My husband tapes Crossroads every time. lol. I guess I should have mentioned the DL thing, but... I didn't think it was that cool. Sorry!!! haha

Lisa, you can watch most of it on CMT's website. The whole thing is really good. And yes, Photograph is one of my absolute favorites. I even sang it as an audition for one of my high school rock bands. I knew that sustained high note would impress them! (And thank God not many people had video cameras bach then.)

If you go to CMT.com and go to Taylor Swifts artist page and look under her videos the whole crossroads show is there.

Ha ha ha! Def Leppard! My brother totally air-guitared (with a tennis racket) to them when we were kids. I think there might be an incriminating video of us and our friends doing "Rock of Ages"!!

Lol, the Swift x Leppard crossroads is amazing! I remember when it first aired, people went nuts- it's such an unusual pairing but it worked AMAZINGLY well. And I believe they are up for an award because of this crossroads performance!

Ok I just saw that you added the thing about the award at the end of your post, lol. I'm a huge country music fan so it always makes me happy when people who aren't country music fans notice the awesomeness.