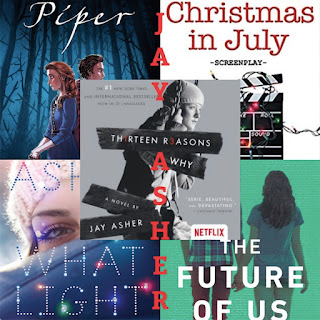 The following songs helped set the atmosphere for writing my books. Some are even mentioned and featured in the books.

You can listen to the playlist on Spotify by clicking here.

"Genetic" - Sonic Youth
I repeatedly listened to the My So-Called Life soundtrack throughout writing, and this is just one song from it.

"Soul Alone" - JoanMarie
Originally written as a song by my ex-wife, the lyrics became a poem written by Hannah. This song concludes the U.S. audiobook of Thirteen Reasons Why.

"Larry" - Buffalo Tom
I listened to this on repeat to write the final scene.

"Two Steps Behind" - Def Leppard
I needed to create a specific distance between two characters in the final moments, so used the title from this song.

THE FUTURE OF US

"Don't You (Forget About Me)" - Simple Minds
My co-author and I wanted the story to feel like a John Hughes movie. This song, featured in The Breakfast Club, is one of the most perfectly placed songs in cinema history.

"I'll Be There for You" - The Rembrandts
Many people know this as the theme song for Friends, which our mid-1990s characters watched.

"Basket Case" - Green Day
I listened to a lot of early-'90s pop-punk while writing. This is the first song Cody learned on guitar.

"Wonderwall" - Oasis
Emma listens to this while driving.

"Love Story" - Taylor Swift
I thought this story felt like a Taylor Swift long song as I wrote it. Coincidentally, Sierra and Taylor both grew up on Christmas tree farms.

"Let It Be Christmas" - Alan Jackson
I listened to so many hours of a "Country Christmas" station on Pandora while writing.

"Christmas Canon" - Trans-Siberian Orchestra
I listened to this on repeat to write the final scene.

"Into The Woods / The Witch" - Danny Elfman
My co-author and I wanted the story to feel like a Tim Burton movie, specifically Sleepy Hollow.

"Lai de la pastourelle" - Norbert Rodenkirchen
We also did a lot of research into 13th century Germany, including their musical instruments.

"I Believe in Santa Claus" - Dolly Parton, Kenny Rogers
The Once upon a Christmas album by Parton and Rogers was a childhood favorite of Cole's.

"Uh Oh, Beautiful" - JoanMarie
A song originally written by my ex-wife, it's performed by Cole in this story.

"Under the Mistletoe" - Trey Pearson
Written for this story by my ex-wife, it was later recorded by my friend.