Last Friday, I spoke at the Cornelia Connelly School in Anaheim, CA. Everyone at the school had read Thirteen Reasons Why prior to my presentation. That, as I've said many times before, makes for a very fun visit!
I always like looking around school libraries. This library had a nice display of books students might like if they wanted something similar to Thirteen Reasons Why.

It was also cool that this visit landed on...

If you look closely at the audience in the photos below, you'll notice a lack of something.

Yep. No boys! Apparently my talk was optional, and the only people interested in hearing an author speak were girls. So while I'm glad they were there, it's very disheartening to see how little boys are into reading.

Just kidding! Seriously? You believed me for even a second? The Connelly School is an all-girl school. Contrary to popular belief, boys do read. (Although, I've never been invited to an all-boys school. So...somebody fix that.)

Thank you to all of the students and faculty who made this such a wonderful visit!

The timing and location of this visit worked in my favor for something unrelated to being an author. As a kid, I was totally into He-Man and Thundercats. I actually went through rolls of film (remember that stuff?) taking pics of my action figures in action, moving them slightly between shots so that I could create a flipbook.

The first thing I remember really investigating as a possible career was that of an animator. And that was mostly because of those cartoons (and Ducktales, of course!). So where is all this going? Well, see...about a half-hour from Anaheim was...um...well...a He-Man, Thundercats, Teenage Mutant Ninja Turtles convention (TMNT came around a little too late for me to get into as a kid), so I went.

There! I said it! I've never been to any sort of fan convention, and I've always wondered what they were like. So I went! There! Say what you will!

And it was amazing. I got to meet the voice of Lion-O from Thundercats. Not only does he do many other voices, but he's a very funny dude. 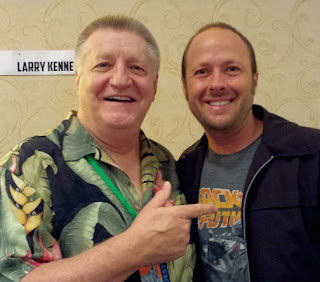 Then I met the voice of Skeletor from He-Man, Alan Oppenheimer. He's a very nice guy who chose to do a high-pitched, more comedic voice for the villain because he didn't have much interest in playing someone more menacing. That unusual choice changed the way the creators saw that character and then wrote that character. 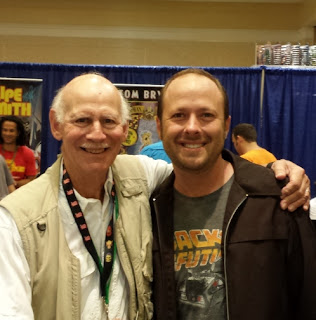 And I was lucky enough to be the first person to capture the meeting of the original voice of Skeletor and the most recent voice actor, Brian Dobson. I love this shot because you can see the respect between them. 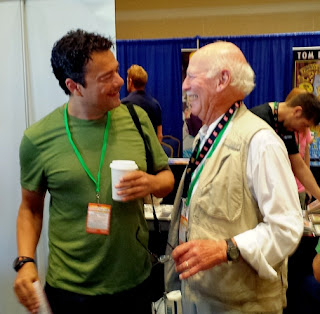 Here's Mr. Oppenheimer, and then Mr. Dobson, giving the audience what it wants!


For me, the best panel over the two days was the Thundercats panel, which featured two writers and four voice actors. All these years later, the camaraderie and love between the actors was obvious. The respect was definitely there on other panels that featured actors from later incarnations of the various shows, but not the same love. I'm sure that has to do with how the voices were recorded. Now, the actors mostly go into studios alone. Back then, the actors were usually in the room together.

The panel below featured several of the people who came up with the concept and design for the He-Man figures. The ability to hear from the actors, writers, and toy designers behind so much of my childhood was fascinating and a little surreal. 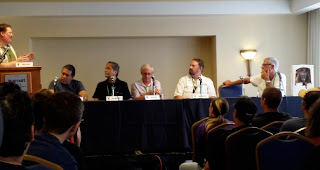 I also attended a panel with the designers of the Teenage Mutant Ninja Turtles. And here is the very first sculpture made of one of those funky pizza-eating amphibians. 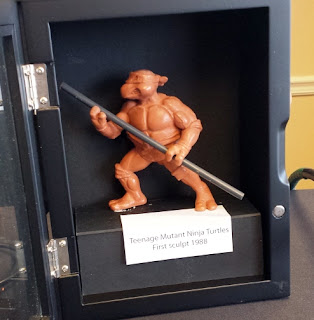 And of course, there was a costume contest. 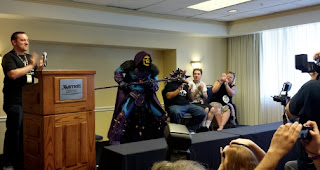 I went to Power-Con to learn behind-the-scenes secrets of an industry I've always wanted to know more about (as well as to give goosebumps to my inner-child). I'm definitely nowhere near being a fan on the level of most people at that convention. The most highly attended panel was one put on by Mattel to announce upcoming collectibles. I didn't attend that panel because my interests are in the history surrounding these properties. And that's why I left the convention with two original He-Man animation cells! 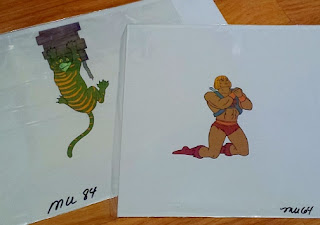 You really had me believing the no boys part!!

I'm going to my very first Doctor Who convention in November, and I'm looking forward to meeting the various actors from the show. But like you and He-Man, I grew up with his twin sister, She-ra; I had the action figures and watched the cartoon religiously, and even have boxed sets of the show now as an adult that I love watching even more now. Hearing that clip you took of the voice actor for Skeletor made me cringe, I always hated how mean he was, but I must admit he's kinda cool too!

I've been to 40-50 conventions, mostly SciFi and Fantasy. So, welcome to my world *g* I love conventions.