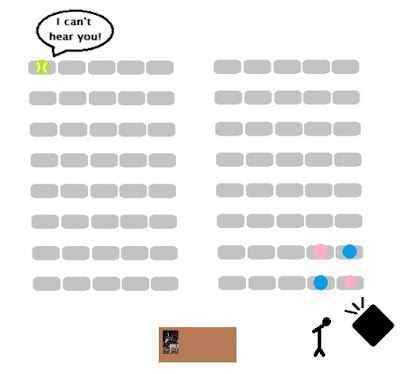 Haha! I have thought many times about speaking to a large group as an author, but have not put much thought into speaking to a small group. Thinking about it now makes me feel uncomfortable.

Too funny! I can just picture the old lady in the back scootching away... BTW, you did a great job with the SCBWI key note. I remember it as both funny and inspiring.

Related to your previous Doritos post, check out "Beyond Taco Bell's Doritos Locos Tacos": How Does Other Fast Food Taste With Doritos?

I think there's an anthology in this: every author's most embarrassing moment! I'm sure there would be too many to print....

Joanathon, I'm sure very few authors think, "I hope one day four (or five) people show up to my signing." But it's good to learn to enjoy them all. Those girls were smiling through my entire presentation, so I'd say it was a success!

Yvonne, thanks for the link. I may just have to try that Subway Spicy Italian pairing. That's my fave sub!

And G., we just need a catchy title.

First of all congrats on staying on the best seller's list for 13RW! No surprise there.

If there is one book that I would recommend as a fave read, it would be that one. No doubt. I tell everyone about it. I can't wait until the movie!

There are few books that really stay with me. 13RW is da bomb!


LOL on the elderly lady with the fuzzy tennis balls. You tell the best stories. Both fiction and real life.

I'll have to remember this when I do a signing:)

McRib sandwhich. haha. sorry, i had to do it!

Your humor has just made my day. How do you do it?

I'm still trying to wrap my head around a faculty member telling you he/she was unhappy with you being there. Seriously! What is up with people?

This is a great story! I've shown up to signings/readings before where I was one of 2-3 people in the audience (and once when I was the only one) and they're some of my favorite times. It's wonderful to have an author you love talking directly to you!

What I loved most of the story are two things. First, yay for McRib. This tasty little fast food gem deserves way more love. And second: You really photoshopped a tiny little copy of the book on the desk? Awesome *g*

Jay, I know this isn't the most appropriate place to gratify 13RW after talking about the McRib. But I just wanted to say that this is my favorite book ever. I just finished reading it for the second time and I cried just as hard. And I'm a guy. Thank you for the inspiration to be a better person!