A few booksellers where I live recently informed me of a rumor that's been going around. Customers have been buying copies of the book Jay's Journal and insisting that I wrote it.

I can almost understand how this rumor kind of sounds real for a very brief moment.

[from the back of Jay's Journal]
Jay thought he could handle anything. The first time he took drugs was for fun. But what started as an escape quickly spiraled into a haze of addiction. That was just the beginning of the dangerous path that ultimately led Jay to take his own life.

But what really has me confused is that people are arguing with the booksellers, swearing that I wrote this book and that it's a true story.

One, I've never done any drugs. And two...I didn't kill myself.

But sometimes, as Hannah Baker says, you can't disprove a rumor. So this bookstore ordered extra copies of Jay's Journal to keep up with the demand. 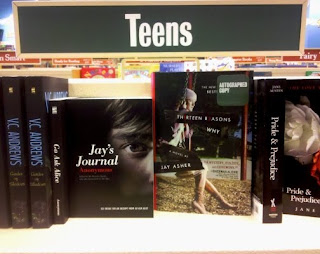 Maybe I should autograph the books and really freak people out!
Posted by Jay Asher at 6:00 AM

Since I live in your town, I'm kind of embarrassed for my fellow San Luis Obispans.

You didn't kill yourself when you were three after publishing a journal? So you SAY... I'll bet next you'll be saying Elvis is dead and you weren't born in Kenya.

but is written by Beatrice Sparks who as I just found out from Goodreads also wrote Jay's Journal.

Maybe she can help you out with the rumors lol.

Oh and I just noticed its right next to Go Ask Alice in that picture :P.

hahahahahah . i don't get this . lol what is this book ?

Maybe you should ask for your royalties?

The Pen and Ink Blogspot said...

"If they think it's you, do it. Keep the fans happy." That was actually advice from Ben Johnson the actor to Barry Corbin, a fellow actor. Their voices were very similar and Barry was often asked for Ben's autograph.

Fans starting rumors about you? You are officially a celebrity, Jay lol. Seriously, the fact that they're passionate enough about their belief to argue with booksellers. Shall I expect you in US magazine next? :-D

Do I see a copy of Jane Austen's Pride and Prejudece next to my other favorite book of all time? Why, yes. Yes, I do. *heart melts* Oh, wait a minute. Is that copy of Thirteen Reasons Why autographed? Yes, I believe so. *heart melts more*

Ha! My, oh, my, fans are spreading rumors? You'd think after reading TRW they wouldn't do such a thing. Well, it's the good type of spreading rumors, right? I mean, when you hear that your fav show or book is coming out with a movie, you'd like to tell everyone. Yet it's a rumor, and you can't disprove a rumor.